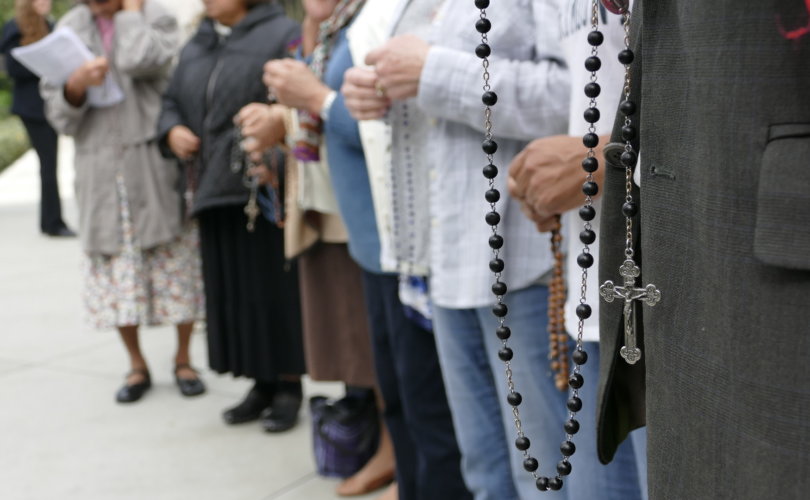 LOS ANGELES, California, March 26, 2019 (LifeSiteNews) – A group of faithful Catholics demonstrated against the undermining of Church teaching on sexuality at the Los Angeles Religious Education Congress (LA REC) on Saturday, praying the rosary and invoking the intercession of Our Lady of Fatima.

The American Society for the Defense of Tradition, Family and Property (TFP) organized the protest adjacent to the Anaheim Convention Center, where the LA REC was held from March 21-24.

The LA REC event should “serve to clarify Church teaching, customs and practices in our age of misinformation, insecurity and doubt,” said Michael Whitcraft, Southern Californian representative for TFP.

“One would expect such clarification at an education congress, especially since the event is organized by the Los Angeles Archdiocese which was forced in 2013 to settle a sex-abuse lawsuit for $660 million,” he said. “To date, this is the largest such payout in Church history.”

“In spite of this need for clarification and reinforcement of traditional doctrine, the REC has long been known for promoting the opposite,” Whitcraft continued. “Sadly, this year’s congress promises to repeat the trend.”

Each has made dissenting statements in the area of Church teaching on human sexuality, and/or Church authority.

Additionally controversial this year was the scheduled appearance of retired L.A. Cardinal Roger Mahony, despite his controversial history of cover-up with sex abuse cases and his having been pulled from public duties in his archdiocese several years ago by his successor, Archbishop José Gómez.

While the REC is presented by the L.A. archdiocese, it takes place in nearby Anaheim, which is located in the Diocese of Orange.

TFP members and supporters held the group’s banner at the demonstration Saturday, along with other signs and banners on the sidewalk outside the convention center where they were visible to streams of Catholics entering the REC and Anaheim traffic as well.

A statue of Our Lady of Fatima and a bouquet of flowers were placed on a table for the prayer rally, joined with a relic from Saint Elizabeth Ann Seton.

One of the messages given to the children from Our Lady at Fatima was that the final battle between good and evil in the world would take place over marriage and the family.

The main banner for the demonstration read, “Fr. Martin and other speakers at the conference reject Catholic teaching on the family.”

Anaheim police and convention facility officials worked positively and well with TFP on its demonstration, which drew roughly three-dozen participants, most who’d planned to come and some who joined in upon seeing the statue of Our Lady and hearing the rosary prayed.

Whitcraft was happy with the turnout in light of the fact it was conducted the same day as TFP’s national St. Joseph Crusade for Traditional Marriage.

It was her first TFP event and she told LifeSiteNews that she was “definitely” glad she came.

“It’s hard to comprehend that this is being perpetuated to our Catholic faith,” she said.

“How is this allowed?” Bynum asked.

“We need to stand up for our Catholic faith,” she stressed. “And not be afraid to stand true to the teachings.”

Victor and Merly Gorospe came to the TFP rosary demonstration at the LA REC from Mission Viejo, CA.

Merly Gorospe told LifeSiteNews she was thankful to God for religious freedom and the right to prayerfully protest at the REC event.

They came because they believe in the sanctity of marriage, she said, and because the family is the basic unit of society, and must be defended. Marriage and the family are being broken apart in the world, they feel, and lay Catholics must take action.

“We are hopeful in the triumph of the Immaculate heart of Mary,” Merly Gorospe said.

Victor Gorospe was direct in identifying the role Church leaders have played in the issue.

“There’s just a lot of confusion,” he told LifeSiteNews, “not a lot of clarity.”

The LA REC has some good programming, Victor Gorospe said, but it also has a lot of wrong teaching.