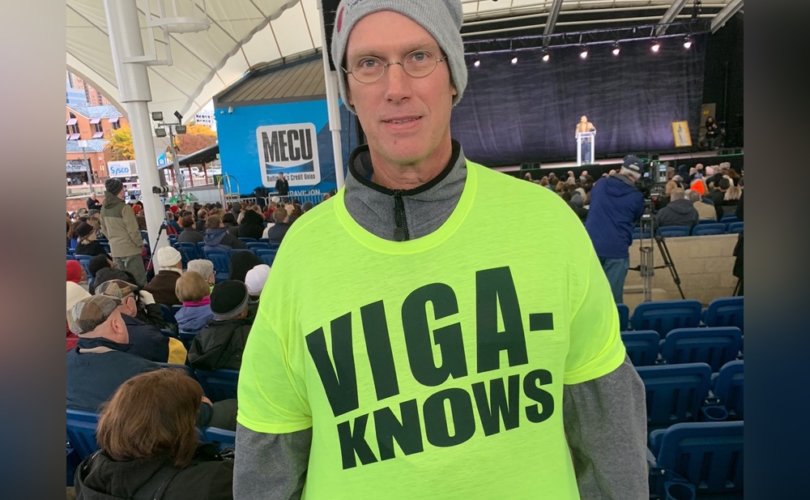 BALTIMORE, Maryland, November 15, 2018, (LifeSiteNews) – The contrast was stunning: The nation’s bishops, comfortably ensconced in a luxury waterfront hotel for their Fall General Assembly, could peer out through broad expanses of windows at the hundreds of lay people gathered outside in the cold damp air, hoping the bishops would hear their pleas to rid the Church of its homosexual clergy “cancer.”

Concerned Catholics from all over the country descended on Baltimore to be within earshot of the bishops, traveling from New England, the Midwest, Florida, Texas, California, and everywhere in between.

And while nearly every one of the nation’s prelates was next door at the United States Conference of Catholic Bishops (USCCB) meeting, only one cared enough to leave the hotel to greet the faithful, hear their concerns, and pray with them.

“My flock, back in Tyler, said ‘go and pray with those people,’” explained Bishop Strickland of Tyler, Texas, who gave his blessing to participants of the Silence Stops Now rally as they filed into the MECU Pavilion, located on a pier next to the Marriott Inner Harbor Hotel.

To those gathered, Strickland appeared to be the only shepherd with a shepherd’s heart.

One other prelate had a strong presence at the meeting although he was not there:  Archbishop Carlo Maria Viganò.

Many wore bright pink “Viganò” buttons and “VIGA-KNOWS” t-shirts. And as Church Militant’s Michael Voris, chief organizer of the event, told the crowd of the Archbishop’s message to the U.S. Bishops earlier in the day, urging them to confront sex abuse as “courageous shepherds” rather than “frightened sheep,” the delighted crowd began chanting in unison, “Vigano! Vigano! Vigano!”

LifeSiteNews asked those gathered at the Silence Stops Now rally why they had made their way to the rally – some at great expense – and what personal message they would like to deliver to their bishops.

Admit the heart of the problem; homosexuality in the priesthood

“I would like for my own bishop, Bishop Robert McElroy of San Diego, to admit that the problem is about homosexuality, not clericalism or abuse of power,” said Allyson Smith, who traveled across the country for the event.

“The problem is homosexual predation that needs to be confronted,” continued Smith, adding, “The truth about that will set us free.”

Patrick Ruane of Youngstown, Ohio, was strident: “Bishops, you’ve got to stop being afraid of using the ‘H word.’ This is a homosexual crisis. Stop ordaining homosexuals, and get rid of the homosexuals in the priesthood that are the cancer of the Church.”

“The bishops had better learn that the Catholic laity are angry because they know what is going on,” said John Olenik of Saratoga Springs, New York.  “It’s a homosexual problem, and nobody will admit that openly or publicly. You have to admit what the problem is and then get rid of the problem.”

Dan Goddu of New Hampshire said the bishops need to admit that this is about “more than clericalism, that this is an issue of homosexuality within the priesthood and the episcopate,” and remind themselves of what the Catechism says about homosexuality.

Parents: We can’t trust you

“Be bold and courageous,” urged Gary Cummings of West Virginia, “and restore sanctity to their position.

“There is no way any parent in America will entrust their children to a seminary, at this point, if they continue on this path,” added Cummings.

Judy Murray, who traveled from Texas with her two sisters, issued a similar plea. “We want our bishops to shepherd us. We don’t want to be afraid of our little children becoming altar boys and something happening to them with a predator priest.”

Admit the truth or resign

“Every bishops should make a statement of what he knows, of what cases he’s dealt with, and if he’s covered up, he needs to admit it,” suggested Donna Bethell. “And if he knows that another bishop has failed, he knows to go to him and in charity and say, ‘Brother, you need to come clean on this.’ And if he won’t, as Our Lord said in Matthew 18, ‘Tell the Church.’”

“We must know about these things. If a bishop is not willing to make a statement of what he knows, he doesn’t need an investigation, he needs to resign, added Bethell. “We need to tell him so: Bishop make a statement, or resign.”

Jonathan Taylor of Greenbelt, Maryland, said he wants the bishops to heed Archbishop Viganò’s appeal to them “to come forward with documents and everything that they know, to get the record out there so that we can begin to figure out how to address this issue.”

“I want the bishops to understand that this is a spiritual earthquake,” said Kathleen Frampton of Columbia, Maryland, “and that what we’re going through now is akin to what people went through before the Protestant Reformation.”

“If they don’t appreciate the gravity of the situation, the Church will clear out very quickly,” continued Frampton. “I hope they have the courage to deal with the root causes.”

A watershed moment: things get better, or they fall apart

“This is potentially a watershed event in the life of the Church in the United States,”  said Richard Bonomo, an electrical engineer who runs a nuclear fusion laboratory at the University of Wisconsin. “Either things get better from here, or they fall apart completely.”

Bonomo said we need to pray for the bishops to be the men that they should be. “They need to break free of the shackles that they themselves are wearing.”

“It is time,” declared Kirsten McCall of Virginia, “It’s over. We know about it.”

The bishops “need to step up. We need to clean house, to shine a light on it and root out the evil going on today,” homosexuality, which “is like a cancer,” added McCall.

Brenda Scott of New Iberia, Louisiana, said, “It is time for the bishops to recognize this problem in the Church for what it is: The homosexual infiltration of the Catholic Church” and the coverup that has protected it.

“The problem here has been institutionalized ordination of practicing homosexuals,” said  Kevin Gleeson, who was at the rally with his daughter, Jemma. “The approach to this has been to bury that, to do payoffs and keep these guys in ministry.”

“They are ordaining problems, and perpetuating it,” added Gleeson.  “That must stop.”