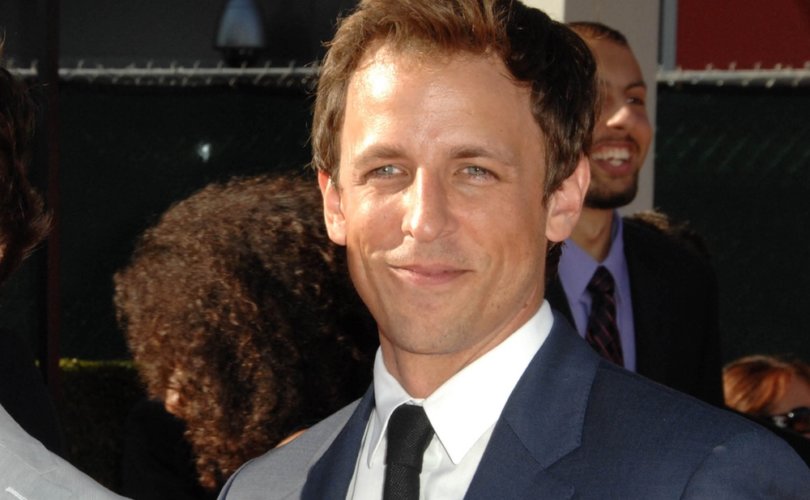 The exchange between Meyers and one of his one of his writers, Jenny Hagel, employed the myth of institutional Church bias toward same-sex attracted individuals and smeared the entirety of the Catholic Church for the sex abuse scandal.

The bit “showcased their ignorance,” Bill Donohue said in a release Tuesday headlined, “The Ignorance of Seth Meyers.”

“The Vatican recently refused to host an international women’s day conference because one of the speakers was a lesbian,” Meyers had jibed on his Monday night broadcast, to set up the joke.

Hagel then delivered the punch line with, “…and because they’re too busy hosting a 2,000-year-long pedophile convention.”

Voices of Faith, a Catholic feminist collective, has presented an annual conference at the Vatican for the last four years, but moved the “Why Women Matter” gathering to the Jesuit Center in Rome this year after the Vatican objected to three of the speakers.

The event’s headliner, former Irish president Mary McAleese, is infamous for her longtime advocacy of women “priests,” homosexuality, and abortion. McAleese has been vociferous in her criticism of the Church, calling it the “last bastion of misogyny.”

Reports vary on which speakers aside from McAleese were included in the Vatican objection. Participating were at least one openly gay presenter, a number of LGBT activists, and otherwise vocal opponents of Church teaching on sexuality, contraception, abortion, and women’s ordination.

Cardinal Kevin Farrell, head of the Vatican’s dicastery for laity, family and life, had said an event in the Vatican presupposes papal support, according to a report from The Tablet, but Farrell stressed he was open to dialogue with the group.

Donohue centered on two of the scheduled speakers in his response to Meyers for the Late Night anti-Catholic joke.

“This year the Vatican refused to host the event because two women, Ssenfuka Joanita Warry and Tina Beattie, have a reputation of bashing the Catholic Church,” Donohue said. “Had they been heterosexual, the result would have been the same.”

Donohue pointed out the absurdity of expecting the Catholic Church to provide a speaking platform within its own walls for individuals who vocally attack the Church and fight against Her teachings.

“Why is this different from any other conference host?” he asked. “Do journalists host conferences and awards dinners featuring those who hate the media? Do Muslims welcome anti-Islamic bigots to their events?”

Donohue then noted the ignorance in the late night personalities’ slam of the totality of the Catholic Church for the abuse scandal.

“The quip about pedophiles is another example of their ignorance,” he said. “If Meyers and Hagel were interested in the truth, they would mention homosexuals—gays were responsible for the lion’s share of the scandal (less than five percent were pedophiles).”

“But that would take guts,” added Donohue. “And this is not something that the writers and hosts of late-night TV shows have in abundance.”

Donohue wrapped up his castigation of the late night host and his associate by noting their ignoring the glaring Hollywood sex abuse scandal right beneath their noses in favor of taking a shot at the Catholic Church.

“Why didn’t Meyers and Hagel use a more contemporary example?” Donohue queried. “Why didn’t they make a joke about Hollywood not hosting a conference featuring its most strident critics? Then they could have said that the moguls are too busy hosting a decades-long rapist convention.”

Meyers has made anti-Catholic jokes and comments a number of times in the past.

In his statement on Meyers’ latest episode of anti-Catholic bias, Donohue provided contact information to express concern to NBC, which airs Late Night With Seth Meyers.