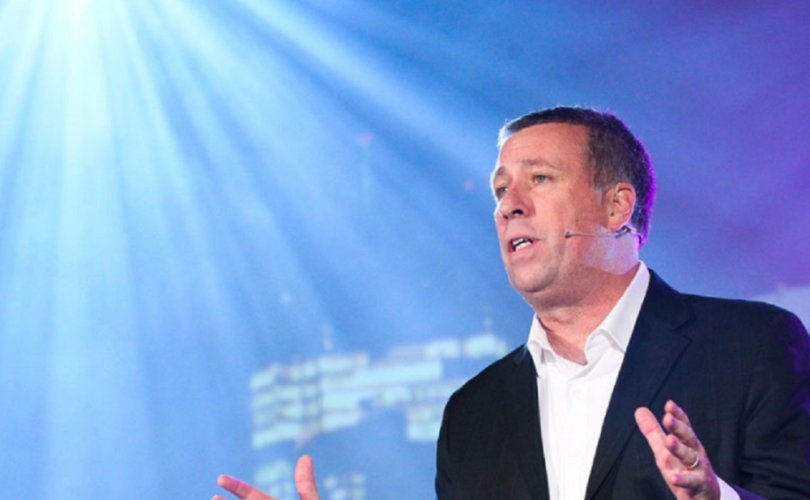 April 25, 2019 (LifeSiteNews) — The head of a nationwide Catholic collegiate outreach group called for a great Catholic awakening Tuesday at a national prayer event.

Curtis Martin, founder and director of the Fellowship of Catholic University Students (FOCUS), told the National Catholic Prayer Breakfast that there have been periods of renewal throughout history.

But rather than being resigned to an absence of hope, said Martin, young Catholics today have the potential to do great things.

The coming generation of Catholics is made up of “survivors by God’s design,” he said, having been born after legalized abortion, and they are poised to “wake up” and “vanquish the devil in this generation.”

The United States has seen ebbs and flows in religious devotion in the past, said Martin, including two “great awakenings” with Protestants that brought about renewed faith for believers.

Maybe, Martin posited, this is what the Catholic Church in America needs.

“Wouldn’t it be a great time for a Catholic great awakening?” he asked.

Martin was among the speakers for the National Catholic Prayer Breakfast’s 15th annual event, which drew some 1,400 people in Washington, D.C.

The prayer breakfast was created in 2004 in answer to Saint John Paul II’s call for a New Evangelization. A focus of the event is to gather in the nation’s capital to pray for the country.

Attendees include lay and religious leaders, national figures, Catholic apostolates, and other guests from various sectors and backgrounds.

There are around 74.2 million self-identified Catholics in the United States and about 1.1 billion Catholics worldwide, according to the latest USCCB numbers. As of 2018, Catholics constitute 20.8% of the United States population, according to The World Factbook from the Central Intelligence Agency, the Catholic Church is the country’s second largest single religious group after Protestantism, and the country’s largest religious denomination.

Weekly church attendance declined among U.S. Catholics over the past decade, according to a 2018 Gallup study, with fewer than four in 10 Catholics attending Mass in any given week, down six percent over the past 10 years.

It’s not yet known whether the re-emergence of the Church’s clergy sexual abuse scandal in the last year has affected attendance, diocesan or Vatican contributions, or how significantly, but some anecdotal signs indicate that it may do so.