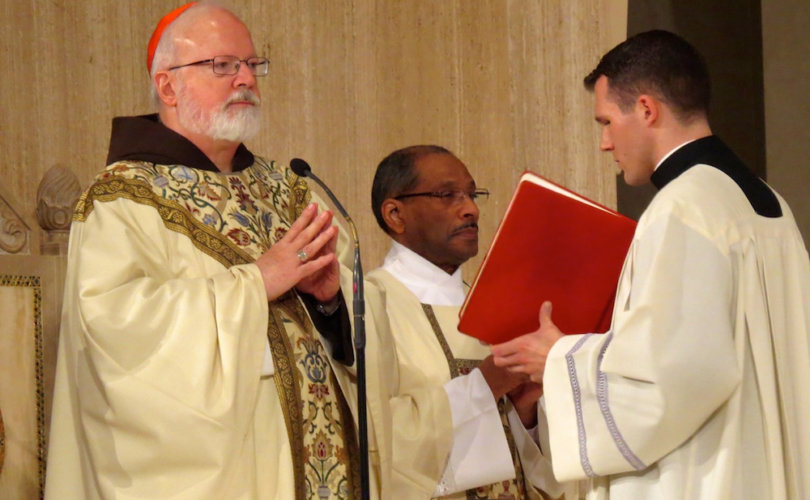 BOSTON, Massachusetts, September 15, 2017 (LifeSiteNews) – A coalition of Catholics and other pro-life individuals released a statement calling for Boston Cardinal Sean O’Malley and his brother bishops in the state to align their actions with their words in support of the pro-life cause.

The group is imploring Massachusetts bishops to end the scandal of Church leaders honoring pro-abortion public officials in accord with the U.S. Bishops statement directing Catholic institutions to not give a platform to individuals acting in conflict with Catholic moral principles.

The coalition also asks Church leaders in Massachusetts to lift a ban on gathering signatures on Church property so as to not inhibit pro-life initiatives in the civic arena.

According to the “Pro-Life Appeal to Cardinal O’Malley and All Massachusetts Bishops,” a disturbing trend has emerged in the state in recent years.

“While there is still rhetorical and material support for the pro-life cause from Catholic prelates,” the coalition says, “too many of their actions belie their words, to the detriment of the Gospel of Life.”

It was the cumulative effect of the Church hierarchy giving so many honors to pro-abortion figures, with little to no pushback from pro-life groups, that lead to the coalition’s statement, Operation Rescue: Boston president William Cotter told LifeSiteNews.

The pro-life alliance urges Cardinal O’Malley and other Church leaders to “stop the betrayals” and “publicly adhere to and immediately enforce the principle stated in Catholics in Political Life, which directs Catholic entities not to honor individuals who defy the Church’s moral tenets.

The 2004 USCCB document states, “The Catholic community and Catholic institutions should not honor those who act in defiance of our fundamental moral principles. They should not be given awards, honors or platforms which would suggest support for their actions.”

LifeSiteNews did not hear back from the Archdiocese of Boston or the Massachusetts Catholic Conference for comment on the pro-life statement.

The coalition has also established a CitizenGo petition for other concerned Catholics and pro-life supporters to take part, encouraging other pro-life leaders to sign the statement as well.

“From 2014 to the present, there have been at least 19 occasions in Massachusetts at which honors or platforms were given to notorious supporters of abortion by Catholic institutions with either the personal participation of or authorization by Catholic bishops,” the statement says.

It goes on to list a number of examples, including the May 2014 Jesuit-run Boston College commencement that saw then-U.S. Secretary of State John F. Kerry awarded an honorary doctorate of laws and honored as commencement speaker.

Kerry not only had a 100 percent pro-abortion voting record as a U.S. senator but verbally attacked Pope Saint John Paul II in 2004. He accused the gravely ill pontiff of “an inappropriate crossing of the line,” purportedly by violating the American separation of church and state, when he urged Catholics in public life to defend the Biblical understanding of marriage.

Cardinal O’Malley, who was appointed Archbishop of Boston by John Paul II, gave the commencement benediction and was photographed smiling and shaking hands with Kerry. He then posed for another photograph with him, the pro-life group pointed out.

The group says the cardinal’s overtures to abortion advocates send a scandalous message of discouragement and confusion and also serve to marginalize pro-lifers.

According to the statement: “It conveys to politicians, police, and the media that pro-lifers, especially the ones who minister outside of abortion facilities, are on their own, and have no institutional backing.”

There are many other examples, the statement says, with a list compiled in Special Report of the Catholic Action League of Massachusetts.

“On repeated occasions, Cardinal O’Malley has been not merely amicable, but laudatory to those who promote abortion,” it says. “This is corrosive to pro-life work and disheartening to those involved.”

Camenker confirmed the damaging effect this has on the state’s pro-life supporters.

“It really hurts everybody,” Camenker told LifeSiteNews. “It’s very sad how pained a lot of people are on this.”

Another issue the pro-life coalition cites is a recent ban on signature gathering on Church property in the state, put in place just as another effort to end state abortion funding gets underway.

The bishops claim that an “overwhelming” number of parishioners opposed the collection of signatures, presumably during the 2015 signature drive on the same issue, according to the statement. It then raises the question: Compared to the 28,891 people who signed the petitions that year, which number is really overwhelming?

“Do those who complain about relatively rare pro-life petitions represent truly Catholic thinking,” the statement signers asked, “and should their objections be the basis of Church policy?”

With the need to issue such a statement, chairman of the Boston Catholic Radio Advisory Board Louis Murray said he is concerned for the entire Church, given the state of the Boston archdiocese and that Cardinal O’Malley being a top advisor to Pope Francis.

“This protest letter underscores the level of depravity which the Church in
Boston has sunk,” he said.

Murray noted that Massachusetts is one of the first U.S. states to foist state taxpayer funding of abortions, no fault divorce, same-sex unions and transgendered bathroom access upon the people. Yet he said there is little to no resistance from the cardinal unless it is in support of refugees or illegal immigration, or in opposition to President Trump’s extreme vetting travel ban.

“In a state where 45 percent of the people are Catholic, we are the dominant faith and our leaders are putting a ‘warped’ version of our religion into the mix of the state’s culture,” Murray told LifeSiteNews. “It is sad.”

Cotter told LifeSiteNews the statement was a fundamental effort toward the coalition’s goal of getting leaders of the Catholic Church in Massachusetts to embody Church teaching on life in both their actions and their words, and to work with the pro-life community by not engaging in public displays that demoralize pro-life efforts.

“We’re starting small but hopefully the results have some benefit,” Cotter said. “It’s a small thing, but I think it’s an important thing.”