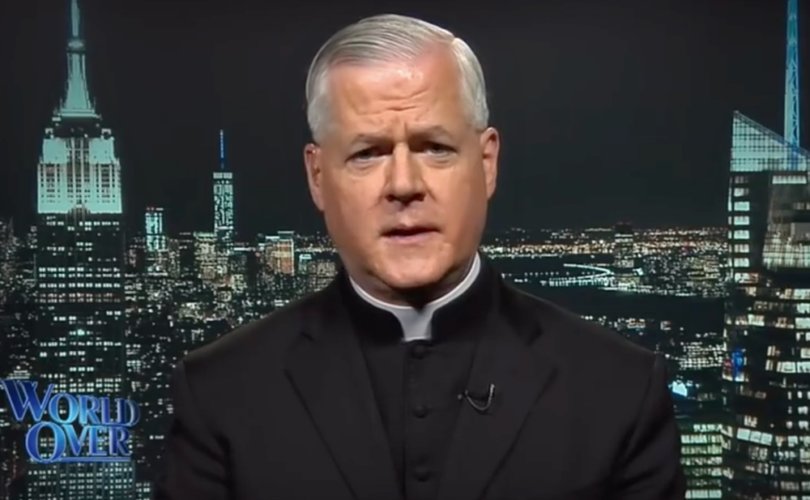 WASHINGTON, D.C., November 1, 2018 (LifeSiteNews) – There’s a terrible problem with the Catholic Church when some of its leaders are pushing LGBT propaganda in conflict with Church teachings, Canonist Father Gerald Murray said recently, and true accompaniment means telling a same-sex attracted person not to act upon their sexual inclination.

Murray and The Catholic Thing Editor-in-chief Robert Royal offered straight talk on Catholic teaching once again on the Oct. 25 edition of EWTN’s World Over program when discussing the just concluded Youth Synod.

Host Raymond Arroyo asked the two about the significance of the Church working with the term “LGBT” as part of the Youth Synod. Despite not having surfaced in pre-Synod discussions the term LGBT did get inserted into the Synod’s working document – the first time for such ideologically-driven language to be included in a Vatican document.

“It is a terrible problem for the Church, precisely because some of the leadership is pushing the line that Father James Martin has been pushing in his books and speeches, which is that God made you this way,” Murray said. “And the assertions made: God made me a homosexual, God made me a bisexual, God made me a transgender person – and this is not true.”

“The Church has what we call Christian anthropology,” continued Murray, “its understanding of God’s creation and then the vocation to which we’re called to the life of grace.”

“It’s a real problem because this is the agenda of the world, this is not Christian revelation,” added Murray. “It’s certainly not the teaching of the Church.”

Murray decried how when one says these hard truths, people will say that you’re offending people.

“And my answer to that is, “When you say the truth, you can help someone be set free,” he said, going on to commend the Church’s Courage apostolate and say as well that LGBT should not be included in the final document.

The term LGBT was not included in the final document. However, the wording that was in the document, “sexual inclination,” is the equivalent of “LGBT” for the UN and homosexual activists.

The LGBT issue had also come up in a Synod small group run by Chicago Cardinal Blasé Cupich, where Cupich had said they wanted to make sure that people felt included by whatever the Synod had to say.

To this Royal responded that there were efforts to exploit the language in the Catechism saying same-sex attracted individuals were to be treated with respect. However, Royal noted, the Catechism also says we are to respect the passage in Genesis that says male and female He created them.

“There is no Catholic path forward for the acceptance of homosexual activity as such,” stated Royal.

Even by debating this, those pushing it hope to soften the opposition, he said, and give young people and others the false impression that this question is up for grabs in the Church and that Catholic teaching could somehow change in the future.

Royal pointed out that the pope has made clear he would like to see a series of regular Synods like this, that debate substantive questions, and then will become part of the Ordinary Magisterium.

“And once you start to do that,” he cautioned, “almost any question can be brought up, so it’s very possible that we won’t ever feel again that there are settled teachings.”

Arroyo told his guests that similar to how the Synod on the Family became about Communion for Catholics living in irregular unions, the Youth Synod had become about special rights for homosexuals.

The Cupich group had suggested there be a separate section of the final document focused on “pastoral accompaniment” of homosexuals, which follows relevant lines of the Catechism, Arroyo said, but this could then ultimately quote the Catechism selectively as had been done with Amoris Laetitia.

“The title of this Synod is about youth, faith and vocation,” Father Murray responded. “We’ve heard very little about either the faith or vocation aspects.”

Most of the Synod conversation had centered on young people who don’t understand or accept Catholic teaching, he said, and how the Church can accommodate them so that they’ll be somehow happy or feel part of the Church.

Further, he said there hadn’t been enough emphasis on getting young people back into the sacramental life of the Church and doctrinal formation.

“You know I get very upset when people say, 'You have to be inclusive,' said Murray. “That’s meant to cut off discussion.”

He continued, “Inclusivity in the mind of the gay rights activist is: Agree with what we say, grant us same-sex 'marriage,' don’t criticize sodomy, and then start believing that there really are transgenders and bisexuals made by God to commit those acts.”

“Um, no,” stated Father Murray. “This is propaganda effort.”

“The teaching of the Church is beautiful,” he said, “it’s rich, it teaches that God made male and female for the complementarity so that new life and love can be brought into the world.”

“This has nothing to do with the satisfaction of disordered desires,” said Murray. “And respect for someone who has a disordered desire is to tell them, 'Look, your desire is bad, don’t act on it.' That’s the true accompaniment.”

“To accompany someone by saying, “Look, I know you feel bad because you can’t get married, two boyfriends can’t get married in church, we’re working on changing that – That’s not accompaniment. That’s what we would call destruction and subversion.”

The program discussion also touched on Cardinal Luis Tagle of the Philippines having said the Synod doesn’t pretend to provide clear solutions, and how he and others had spoken of the youth teaching the elders, as opposed to the Synod Fathers offering young people the Church’s truth.

“I go back to what our Lord said, I am the way, the truth and the life – nothing could be clearer,” said Father Murray.

“And then the teaching that he gave to the Apostles over the course of his public ministry, that was not obscure, it was quite clear,” he said. “The Catechism of the Catholic Church is a fleshing out and an exposition of both the Natural Law and Divine Revelation. It’s quite clear. People want clarity.”

Truth and love are very accessible, the priest of the New York archdiocese said, if one just turns to Christ.

“We don’t need to conduct a survey of 500,000 people to find out, “Well, what are you really interested in life,” stated Father Murray. “We’re not selling a product. This isn’t Coke vs. Pepsi. We have to propose Jesus Christ.”