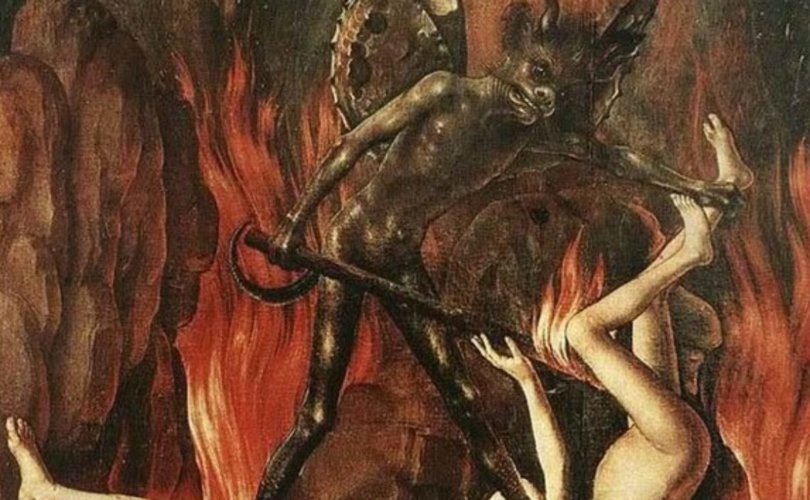 May 30, 2019 (LifeSiteNews) – To suggest that hell is empty amounts to calling Jesus a liar, LifeSiteNews co-founder and editor-in-chief John-Henry Westen told a recent gathering of Catholic pro-life and family advocates in Rome. That hell contains human souls who have rejected God is established by the Lord in scripture and held by the Catholic faith since its beginning.

Westen was answering a question at the Rome Life Forum — held earlier this month — about the Superior General of the Jesuit order having said the devil does not exist as well as reports of Pope Francis denying the existence of hell in favor of the annihilation of “lost souls.”

The annual Rome Life Forum took place May 16-17 at the Pontifical University of St Thomas Aquinas (the Angelicum). Pro-life and family advocates and Catholics from across the world attended the event hosted by Voice of the Family and co-sponsored by LifeSiteNews, Associazione Famiglia Domani (Italy), Family Life International New Zealand, and the Society for the Protection of Unborn Children (UK).

Westen first clarified in the Q&A session on the subject of hell that Cardinal Raymond Burke, other bishops and priests had publicly corrected Jesuit Superior General Fr. Arturo Sosa Abascal’s 2017 comments saying the devil is a “symbolic figure” who doesn’t really exist.

Regarding the pope’s statement about the existence of hell, the comments referenced were reportedly made in conversations with famous atheist author Eugenio Scalfari in the left-wing newspaper Scalfari founded La Repubblica.

Francis has done a series of interviews with Scalfari, each resulting in controversy for what Scalfari reports the pope said, with the no hell narrative forming a pattern with Scalfari. The atheist author has reported in September 2014, March 2015, October 2017 and March 2018 that Francis had told him that there is no hell and unrepentant souls are not punished and instead annihilated. After Scalfari’s reports, the Vatican has typically had to issue some sort of clarification emphasizing that the quotes are not accurate. Scalfari admits the interviews are “reconstructions” from memory, that he takes no notes and does not use a recorder.

In the March 2015 interview with Scalfari where he says the pope denied hell for lost souls, his article says:

“What happens to that lost soul? Will it be punished? And how? The response of Francis is distinct and clear: there is no punishment, but the annihilation of that soul. All the others will participate in the beatitude of living in the presence of the Father. The souls that are annihilated will not take part in that banquet; with the death of the body their journey is finished.”

Another Scalfari interview with Francis from March 2018 that has the pope denying the existence of hell was followed by the Vatican releasing a statement saying the text “should be considered as a faithful transcription of the words of the Holy Father” but never addressed the question of hell or the annihilation of souls. Nonetheless the media by-and-large stayed with the original narrative – leaving people to believe Scalfari’s report of what was said.

An October 2013 interview between Francis and Scalfari that had Francis saying that the “most serious” evils are “youth unemployment and the loneliness of the old” was pulled from the Vatican website due to Scalfari admitting his writings are reconstructed from memory.

Additionally from that interview, Francis was reported to have said that “proselytism is solemn nonsense,” and that “there is no Catholic God.”

One of the difficulties with those interviews, Westen explained to the Rome Life Forum, is that Scalfari doesn’t take notes, goes home, and then writes up what’s there.

Complaints were lodged with the Vatican about them, he said, since the Vatican puts the Scalfari interviews on its website. The 2013 story came down for a period but was put back up, he said, there was no official correction from either the pope or the Holy See Press Office.

The other difficulty with the statement denying hell, continued Westen, is that in Francis’ exhortation Amoris Laetitia, there is a line in there that says, “no one is condemned forever, that’s not the logic of the Gospel.”

“That seems to corroborate what was said in the Scalfari interview,” Westen said. “And has anyone corrected that? Well, not specifically.”

He said it’s very difficult for cardinals and bishops to correct the pope.

“Their call is to ask for clarity,” Westen explained. “And that’s an act of love and charity, because the cardinals as collaborators of the Holy Father for the good of the Church have that responsibility from Christ to bring clarity. And the role of the pope is to bring unity to the Church.”

The cardinals have asked in love for clarity from the pope, he said, not in any way out of any kind of jealousy or hatred for the pope.

Westen said there are other reliable sources beyond Scripture that confirm lost souls do go to hell.

“It was confirmed by Our Lady at Fatima when she showed the three children the vision of hell,” said Westen. “They saw people in hell!”

Descriptions from the Fatima apparitions even distinguished who the demons in hell were, he continued.

And Sister Lucia, in an interview from the 1950’s with Father Riccardo Lombardi, and author who’d written a book questioning the existence of hell, and in the interview when he asked her about the possibility of an empty hell, Sister Lucia told him, “No Father, many are in hell.”

Sister Lucia had affirmed three times for the priest, Westen said, using the same term as Jesus to quantify the souls in hell, “many.”

Jesus said something else on the question, Westen pointed out, when speaking to his apostles about Judas, saying, “Better were it for him had he not been born.”

“If anyone commits a mortal sin – they’re hell-bound,” stated Westen. “If they repent, they’re heaven-bound.”

“If you’re heaven-bound, it can’t be better for you had you not been born,” he said. “So again, you (would) make Jesus a liar.”