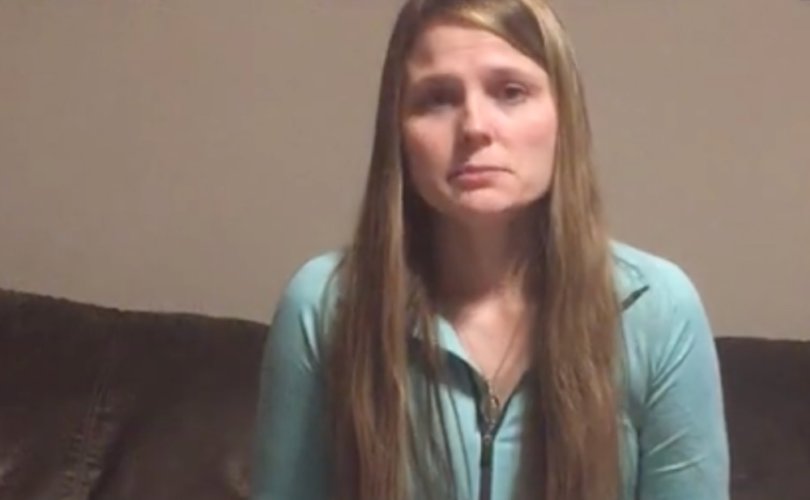 LAKE COUNTY, Illinois, February 5, 2019 (LifeSiteNews) – A married Catholic couple has produced a video asking the American bishops to address not only the problem of sexual predation in the clergy but also the legacy of episcopal cover-up.

Helen Gondek, a 33-year-old mother of three, reads a letter to the bishops in the seven-minute video, offering a voice and a face to represent the millions of American Catholics longing for an end to the crisis of leadership in the Church.

“I am no one special,” Gondek begins. “I do not pretend to be a great scholar or the most qualified person to write you this letter. I am just a faithful lay Catholic who loves the Church.”

“God has tugged at our hearts to try to do something for His Church during this scandalous time,” Gondek says, “and while we feel completely unprepared and unqualified to do so, we continue to remind ourselves that it is not about our power or abilities but rather God’s grace and His will.”

“We also cannot bear the thought of dying someday and looking at Jesus’ face telling him that we felt in our heart we should do something to help the Church but didn’t have the courage to do it,” she continues.

“So here I am doing this video, reaching out to you as a voice of the laity.”

Gondek says she and her husband realize that the American bishops have received “dozens of letters” but thought that “putting a face and a tone of voice to the words may help to convey how we are all feeling.”

“We pray that this video will speak to your heart,” she added.

In the video, Gondek asks the bishops to “stand up and lead” American Catholics. She enumerates serious episcopal problems and scandals, saying that Catholics are “all deeply worried about the state of the hierarchy in the Church.”

“Our hearts ache because we don’t believe Jesus would want his Church in this state,” she states.

“We are reaching out to you with love to ask you to please get together with your brother bishops, stand up and lead us,” Gondek says.

“During this time when accusations are made about cover-ups and proofs of cover-ups are exposed, the Church is being investigated as a criminal organization, four billion dollars have been spent on the sexual abuse scandals, abusers have been moved up through the ranks of the hierarchy, cardinals and bishops are … hiding and shredding documents from the DA offices, and Archbishop Vigano’s accusations are still out there … waiting to be proven wrong, we continue to wait for you to speak and lead us.”

Helen Gondek told LifeSiteNews via email that she and her husband Tim were inspired by the first testimony of Archbishop Carlo Viganò and by their parish priest saying that he needed the laity’s help to “get this filth out of the Church.”

“We then noticed that none of our family or fellow Catholic friends knew of the scandal, and when we would bring it up they would shrug it off and state that it wasn't possible,” Gondek wrote.

“They also did not want to read the Viganò testimony even when we suggested it. So we started getting really worried that it seemed no one was caring about the scandal and that it would all be brushed aside.”

The couple began a Facebook page called “Catholics Who Care” for people who wanted to stay informed about the scandal. They reached out to lay leaders like Scott Hahn, but found that, like the bishops, such people didn’t seem to want to lead the laity forward from the scandal.

“So while praying the rosary and thinking about what to do I had a feeling that God was calling us to do something and felt that maybe a YouTube video to the bishops might be able to reach them in a heartfelt way,” Gondek told LifeSiteNews. “In a time like this we need them to lead us and the lack of leadership we have been receiving is what has led me to do this video.”

‘Cardinal Cupich…is not someone that we trust to lead us’

The Gondeks, who are from Illinois, feel that the only American bishop who has made a statement to the laity is Cardinal Blase Cupich, and that he is ignoring how bad things are in his own Archdiocese of Chicago.

“We have not forgotten that the DA office investigation for his and other Illinois dioceses is reporting that the Church withheld more than 500 names of clergy accused of sexually abusing minors,” Helen Gondek tells the bishops in her video.

“So Cardinal Cupich can continue speak and act as if all is well in Chicago, and he can continue to ignore the fact that we know that it isn’t. But this will still not solve the problem, and he is not someone that we trust to lead us at this point.”

Imagining that the bishops have locked themselves in an “upper room of silence” like the apostles frightened by the circumstances they found themselves in, Gondek says the laity are praying for them.

“While you sit in that upper room, we are all just praying so hard that the Holy Spirit will come down upon you and lead you out of that room to speak to us and lead us with the truth,” she states.

Gondek is worried that the episcopal meeting with Pope Francis in February to discuss protocols for disciplining bishops found guilty of child abuse will ignore Catholics’ more pressing concerns.

“It seems you think we will believe that putting protocols in place will fix the problem but you continue to ignore the fact that cover-ups have occurred and will continue to occur if they are not dealt with right now,” Gondek says.

“Thus, protocols will be a band-aid for the situation, not a solution to the problem; the wound will just continue to fester under the band-aid, become infected, and in 15 years someone will rip the band-aid off to find more cover-ups and scandals,” she concludes.

Believing that God has put the bishops in their positions right now to do something to “lead the Church back to the light,” the young married woman begs the bishops to break their silence.

“We want to trust you, and we continue to look for leadership from you,” Gondek says.

“We have to ask you with love and respect, please break the silence, show us the way. We are asking you to stand up, speak the truth, fight for what is right, and to lead us to heaven,” she continues. “Please defend our faith with all you have.”

Gondek told LifeSiteNews that “full transparency” on the part of the bishops “is probably the best option” in restoring the laity’s faith in them.

“We should not be afraid of what the truth will bring,” she said. “The more that is left hidden the more likely more cover-ups will happen and that is what we are trying to avoid.”