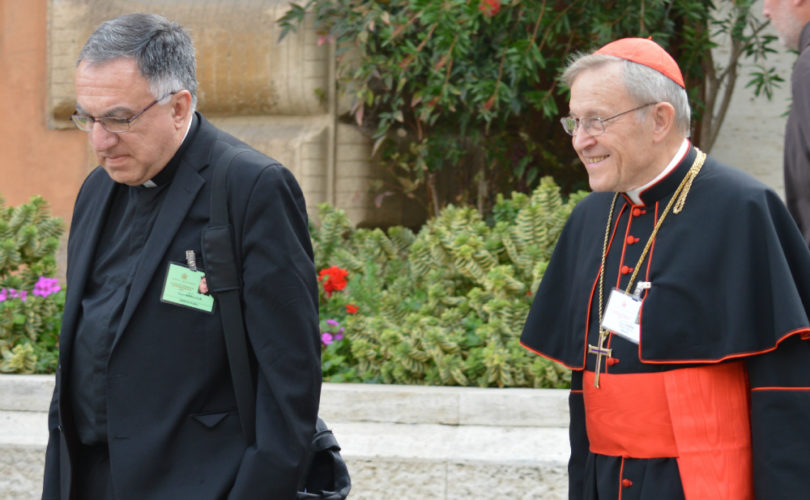 Father Thomas Rosica, and Cardinal Kasper after a session at the Extraordinary Synod on the Family in 2014Patrick Craine / LifeSiteNews

Meanwhile, the Canadian Conference of Catholic Bishops says it is conducting a review of works it has published by Fr. Rosica. He has long served as a close advisor to Canada’s bishops.

In a statement made yesterday, the Chair of the Board of Directors, media mogul Tony Gagliano, made the Salt + Light Board's support clear.

“For the past sixteen years, Fr. Thomas Rosica has worked consistently with young adults on many media platforms and in multiple languages to offer experiences of unity, prayer, celebration, reflection, education, dialogue, thought-provoking reporting and stories of faith and action,” Gagliano wrote.

“This work must continue. We unanimously pledge our support of the continued leadership of Fr. Rosica as Chief Executive Officer of Salt and Light Catholic Media Foundation.”

In his statement, Gagliano acknowledged Rosica's admission of plagiarism and noted that the misappropriations were “serious and wrong.”

“The Board of Directors of the Salt and Light Catholic Media Foundation is aware of Chief Executive Officer, Fr. Thomas Rosica, CSB’s admission of plagiarism,” he wrote.

“It is always very serious and wrong. Fr. Rosica immediately recognized that passages and texts were not properly attributed and took full responsibility for the errors. He has publicly apologized and deeply regrets this unfortunate situation. Where unintended errors were committed, proper references will be provided of the authors. We have heightened the protocol to review all texts to guarantee utmost professional integrity.”

Gagliano indicated that the the Board would “stand together” with the “dedicated staff” at S+L, including the interns.

“We stand together with the dedicated staff of Salt and Light, interns and volunteers, and we will continue working with them and supporting them in their mission of evangelization at the service of the Church,” he said.

The Chair of the S+L Board also revealed that Rosica will be going on leave “to take some needed time for rest and renewal.”

Salt + Light, however, is a not-for-profit, reliant on charitable donations.  According to the Toronto Star, in 2009 the organization “received a $1 million gift from the Hilary M. Weston Foundation for Youth, $500,000 from the Knights of Columbus, and $50,000 from the Demarais family and Power Corp. in Montreal.”

A communications official for the Canadian Conference of Catholic Bishops contacted LifeSiteNews last night to express the bishops' sorrow in the wake of the plagiarism scandal.

Gall indicated the the CCCB would be reviewing the work the media priest has produced for them.

“The Conference is encouraged by his acknowledgement and admission of wrongdoing, and his efforts to make amends,” she wrote.

“The CCCB takes very seriously the instances of plagiarism, therefore it is conducting a review of those CCCB publications authored by him and will undertake any steps as appropriate based on the findings.”

Find all of LifeSite's stories on the Fr. Rosica plagiarism scandal here.