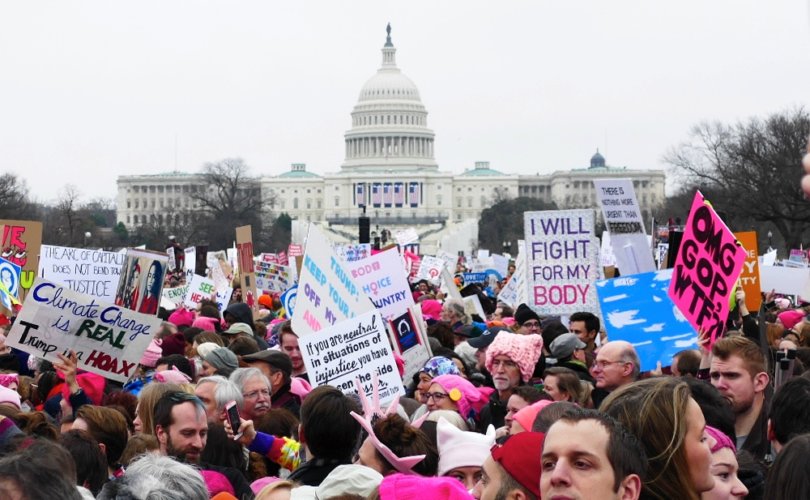 SAN JOSE, California, February 16, 2017 (LifeSiteNews) — “Jesus and his disciples would have marched” in the Women’s March had they been alive today, wrote a pair of columnists in a Catholic paper run by the diocese of San Jose, California, where Patrick McGrath is bishop.

While the columnists promoted the march’s platforms on immigration, environmental protections, and poverty, they failed to mention the extent to which the January 21 event promoted increased access to abortion and contraception.

“For Catholics, the values of the March aligned particularly well with Catholic Social Teaching regarding respect for human rights, the common good, care for creation, and solidarity with the poor and vulnerable,” wrote Deacon Steve Herrera and Joanna Thurmann in the February 7 column that appeared in The Valley Catholic.

“It was an expression of deep faith in Christ and of active discipleship,” they wrote.

Quoting one March participant, they wrote: “Jesus and his disciples would have marched with us if they were here today in support of the people he named in the Beatitudes. Regardless of who they voted for, everyone should feel safe and comfortable in having joined us.”

Women’s March organizers, however, made it clear in their Guiding Vision document that the event championed what they called increased access to “safe, legal, affordable abortion and birth control.”

Organizers were so committed to pushing a pro-abortion message at the event that they told pro-life organizations such as Abby Johnson’s “And Then There Were None” as well as the pro-life group “New Wave Feminists” that they could not participate due to their pro-life position.

The event was promoted by pro-abortion groups such as Planned Parenthood and NARAL Pro-Choice America. These groups felt threatened after Donald Trump, who said he was pro-life, beat out pro-abort Democrat Hillary Clinton in the presidential election.

“We will not stand down in the face of attacks on our fundamental rights, and we will hold anti-choice and anti-woman politicians accountable,” stated NARAL, an official sponsor of the March, in a press release.

LifeSiteNews reporters photographed numerous women attending the event who carried signs supporting abortion as a “human right.” In one outrageous instance, a woman championed “reproductive rights” at the event by carrying a sign that depicted the Blessed Virgin Mary as a bloody vagina.

The Catholic Church calls abortion a “moral evil” since it is the “deliberate murder of an innocent person.” The fifth commandment “forbids direct and intentional killing as gravely sinful. The murderer and those who cooperate voluntarily in murder commit a sin that cries out to heaven for vengeance,” states the Catechism of the Catholic Church.

In the photo of the March taken by Deacon Herrera that appears at the top of his column, a woman can be seen in the background waving a sign that has the words, “Abortion on demand and without apology.”

“The march was a powerful witness of God's grace and love amidst fear and uncertainty. For Catholics especially, it was an opportunity to walk with the two feet of love in action, charitable works and social justice,” they wrote.

In a column on the opposing page of the newspaper titled “Why I Walked on the Women’s March,” Mary Jo Sullivan-Worley said she decided to attend the march out of “concerns for those who will be impacted by new federal priorities” under a Trump administration.

“This March … gave me the opportunity to stand in solidarity for social justice as a Catholic woman,” she said.

Last September, Bishop McGrath released a statement on voting in which he suggested that environmentalism and immigration were morally on par with abortion.

“There are key moral and social issues that need to be considered in casting one’s vote,” he said at that time. “The teaching of Pope Francis is clear that there are a number of concerns that must be included in moral decision-making. Among these are abortion, poverty, capital punishment, care for the environment, assisted suicide, and immigration.”