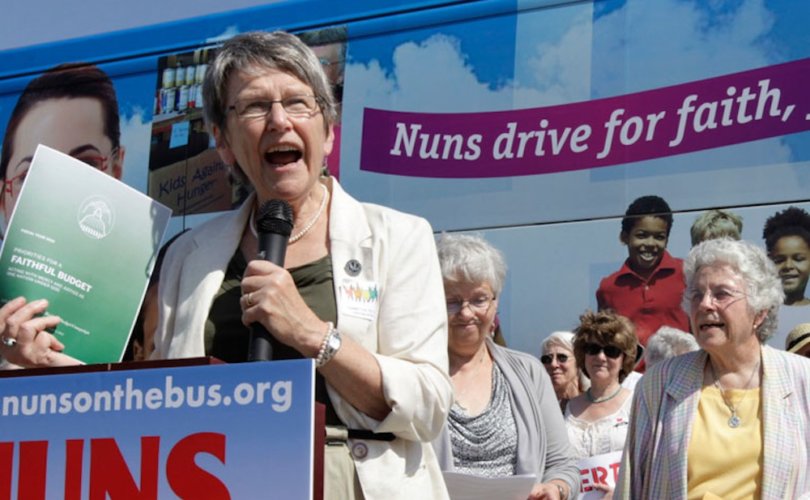 PHILADELPHIA, August 1, 2016 (LifeSiteNews) – A major pro-abortion leader’s account of her own abortion at last week’s Democratic National Convention (DNC) was “touching and compelling,” according to a Catholic nun known for publicly dissenting from Catholic teaching.

Sister Simone Campbell also said she does not support making abortion illegal and attributed the cause of most abortions to women not having access to economic entitlements.

“I think what was touching and compelling was her speaking of her reality, and saying that it is not, you know, the bad girls,” she said. “It’s all women that have this struggle.”

Hogue had said in her Wednesday night DNC address that, “It’s not as simple as bad girls get abortions and good girls have families.”

Hogue’s announcement that she had had an abortion garnered cheers at the Democratic convention. She then went on to tell the audience that she was “fortunate” to have gotten a “compassionate” abortion and that to preserve abortion-on-demand, “We need Hillary Clinton.”

Hogue said it had been the wrong time for her to have a family. “I made the decision that was best for me – to have an abortion,” to enthusiastic applause from the crowd.

She went on to claim that members of the pro-life movement are bothered by the empowerment of women.

Hogue conceded in a promotional abortion video released earlier this year by NARAL that her abortion was one of convenience. She also dispelled the abortion lobby’s frequent claims that women don’t take abortion lightly when she explained how she chose abortion after her birth control failed and that she thought she couldn’t achieve her dreams if she’d had her baby.

Sister Campbell, who has herself appeared at the DNC in the past, is known for her support for legal abortion and is regarded as having undermined the U.S. Bishops’ expressed concern over Obamacare’s abortion component when the controversial health care takeover was being debated before its passage.

She was in Philadelphia for the DNC this year with her “Nuns on the Bus” tour promoting progressivism as an approach to “income and wealth inequality,” where she was interviewed by far-left Democracy Now!, which has been hostile to life and conscience rights.

Women choose abortion most often because they do not have “economic options,” she told the program’s Amy Goodman.

“And I think the shock of our nation is that some claim to be pro-life but they’re really only pro-birth,” she said. “They don’t do what’s necessary to support women in carrying a baby to term, in providing paid family leave, in providing maternity leave, parental leave, in providing reasonable cost childcare, the litany goes on and on. If we were really serious about pro-life, we wouldn’t look just at birth.”

Sister Campbell then restated her support for keeping abortion legal.

“From my perspective, I don’t think it’s a good policy to outlaw abortion,” she said. “Rather, let’s focus on economic development for women.”