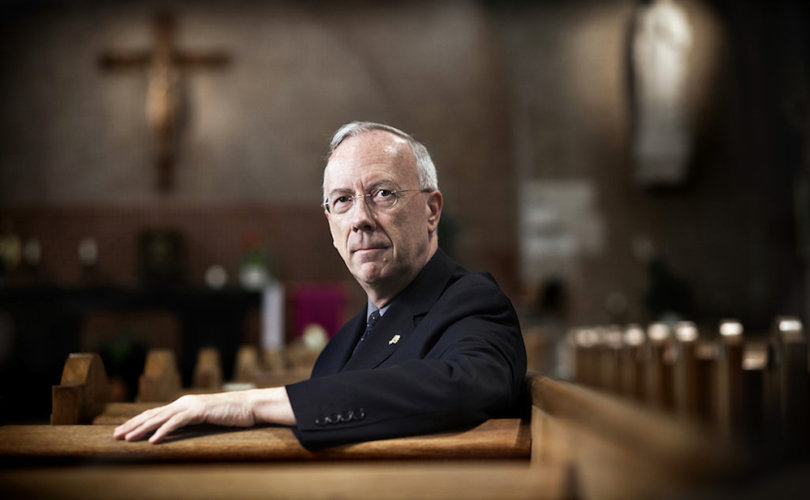 May 5, 2017 (LifeSiteNews) — The superior of the Brothers of Charity is trying to encourage his Catholic order in Belgium dedicated to looking after the sick and the elderly to reject a decision approving euthanasia for patients, including those under psychiatric care, at their health centers.

Brother Rene Stockman, who is based in Rome, has voiced his grave concern, but so far to no avail. It appears that the order’s board of directors, which is largely made up of non-religious, forced the change in policy to allow the legal injections to be administered at the brothers’ facilities. Brother Stockman has not been willing to offer details.

In lengthy guidelines discreetly distributed in March to all directors and medical practitioners working in their facilities, the Brothers of Charity distanced themselves from absolute rejection of euthanasia for “personalistic” reasons.

The rejection by the Brothers of Charity of the principle to respect all life until natural death might have gone unnoticed if the Belgian Catholic press had not picked up the news. More than a month passed before the magazine Tertio focused public attention on the affair late last month. In the meantime, Brother Stockman had been active behind the scenes to try to effect a change of heart, reminding those who are under his authority as Superior General of the order that “life must be protected at all times.”

In an interview with the Dutch daily Katholiek Nieuwsblad on Monday, Brother Stockman explained, “That is the core and the mission of our congregation. The general directorate has formally urged the Belgian directorate to distance itself from the guidelines. Now it is up to them to give an answer.”

Brother Stockman also underscored the necessity of keeping up the fight for “fundamental values.” He authored a recent book in which he specifically condemned euthanasia for psychiatric patients.

The Brothers of Charity (or Broeders van Liefde in Flemish) run 15 psychiatric clinics in Belgium, and a total of 105 private and public centers including hospitals, that cater to the mentally ill. There are about 100 brothers in the country.

Brother Stockman indicated that his order has received “informal support” to reject euthanasia from the Belgian bishops’ conference, but added that he expects them to make their position clear and officially known. To date, that has not happened.

Bishop Johan Bonny of Antwerp went the other way, telling deredactie.be that he had not yet read the whole document but that it looked like a “nuanced whole.”

“I can imagine that a congregation like the Brothers of Charity, that is active all over the world, should find it difficult to come to a same judgment in all places on moral issues,” the bishop said. “Specifically, the Brothers have to find a modus vivendi in our society between medical viewpoints, moral judgments, public opinion, and the surrounding culture.”

This is the logic surrounding Amoris laetitia, which involves adapting principles and above all “praxis” – a Marxist word – to historical and geographical contingencies.

“It is very possible that their vision is close to our way of thinking as bishops, Bishop Bonny said. “On ethical questions, it is difficult to get everyone on Earth to be on the same position. Culture and mentalities are so very different, not only within specific congregations, but also within the Church.”

Brother Stockman was clear in his condemnation of these statements.

“It is wrong for a bishop – who has not even read the complete text – to make statements about this issue apart from the bishops’ conference. I have been deeply upset by this. In fact, he is saying that euthanasia should be possible. That upset me very much. He should realize that he is speaking as a bishop.”

Catholic facilities make up 20 percent of the total psychiatric institutions in Belgium and were known not to allow euthanasia. Psychiatric euthanasia remains controversial and there was no visible pressure to change policies on that count, except from the most liberal members of Belgian society.

“It’s absurd that 20 percent of hospitals refuse to apply the law,” said left-wing senator Jean-Jacques De Gucht. “Apparently, we live in a society in which laws are adopted that some institutions can calmly ignore. The Brothers of Charity now declare that they will respect the law. The fact that they have not been doing this for 15 years is something that to my mind is ‘not done.’”

It is not certain that such opposition is the motive behind the decision apparently made by by the Brothers of Charity’s board. Those new guidelines openly accept euthanasia on the principle of refusing “absolute” principles such as respect for human life. Making clear that all of their institutions – they also run a number of homes for the elderly – will from now on accept euthanasia to be performed within their walls, they state:

“We want to think and act on the basis of relational care ethics on a personalistic basis. This means that we never see a value as an absolute value that unconditionally trumps other values, but as a fundamental value that can be put in balance with other values in a personalistic vision of man. In the same way, we do not consider values in an individualistic way, but from a relational viewpoint, so that they are fulfilled in a relationship between people.”

The document introduces this relativistic point of view by stressing the “complexity” and “ambiguity” of human affairs that require – so the Brothers of Charity now affirm – weighing values against each other and linking them together as “reasonably” as possible. None of this is clear, but what is for sure is that the Brothers see this as a way not only to allow euthanasia but to extend it to those who are not terminally ill, as is the case with psychiatric patients.

The document goes on to explain under what conditions a euthanasia wish can be accepted, including through implication of official euthanasia doctors (“Leif” doctors) who can give legal and practical advice. It also makes explicit and comments on the legal conditions that must be met in order to give euthanasia to non-terminally ill mental health sufferers, including “frequent and deep-going moments of discussion” with the patient and consulting with other independent doctors. This is how slippery slopes are made …

As to conscientious objection by doctors or caregivers, the document accepts those in the same way as the Belgian law does. It makes clear that caregivers who do not want to participate in euthanasia must give “timely and explicit” notice of the fact so that the patient can find another solution. But an obligation for conscientious objectors to refer patients to a more willing colleague amounts to forcing them to become complicit to the affair. The guidelines do ask for the choice of location for the euthanasia to take into account the “trauma” that can result for fellow inmates. The trauma of seeing a physically healthy friend or roommate being killed by one’s own doctor, for instance …

The Brothers of Charity also expect euthanasia in their centers to be performed only after having been green-lighted by a specially formed commission within their institutions, on a written exposé of the case by the doctor who first accepted the euthanasia request.

While the document pays lip-service to the principles of respect for life and does evoke alternative routes that should be offered to mentally ill patients with a death wish, its main aim is to show how euthanasia can and should be offered and it goes into a wealth of detail about that. As to the Catholic viewpoint, it is completely absent from the guidelines.

This is one of the many shocking aspects of the new policy. In his interview with Katholiek Nieuwsblad, Brother Stockman sadly pointed out that none of this is in accordance with the vision of the Brothers of Charity.

“We consider the protection of human life as absolute,” he said, making clear that the organization in Belgium has deliberately moved away from this principle.

The document “is the consequence of far-reaching secularization in Belgium and Flanders. I myself am Flemish, but I have not worked in Belgium since the year 2000. I have seen many things change since then. People are carried away by the tendency towards secularization. In the text, you will not find the slightest reference to God, the Bible or the Christian vision of man. It is a totally secularized vision,” he said.

Euthanasia is still relatively rare. According to official statistics, roughly one euthanasia per week is performed in the country on a patient suffering only from mental illness in no more that 6 percent of all institutions for the mentally ill.