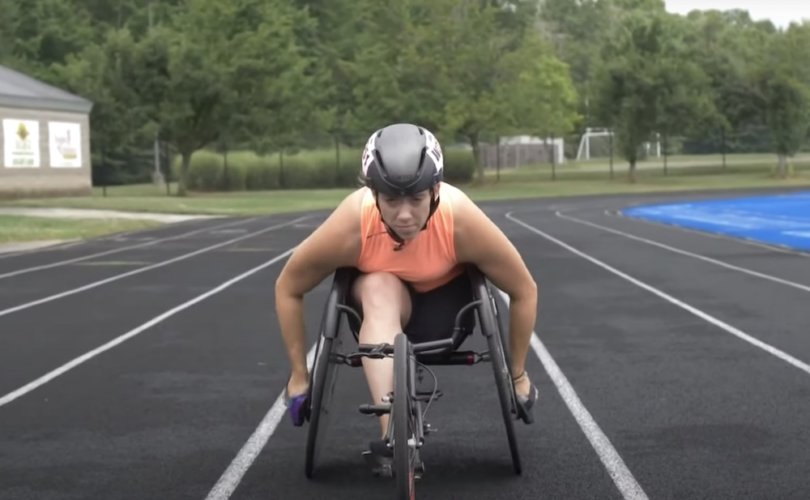 CHAMPAIGN, Illinois (LifeSiteNews) – The Paralympics are set to start on August 24 in Tokyo, but American Paralympian Jenna Fesemyer says medals must take a backseat to “Glorifying Christ.”

According to the Catholic Post, Jenna Fesemyer was the resident director of Newman Hall of St. John’s Catholic Newman Center at the University of Illinois until departing to join the Team USA track and field squad for the upcoming Paralympic games.

Fesemyer, who was born without a left leg and hip socket due to a congenital disease, was not even Catholic when she first arrived to live at the Newman Center.

Enrolled at the University of Illinois, Fesemyer only chose to live at the residence hall because of its accessibility and proximity to the campus, according to the Post.

“It was quite a surprise when we rolled up in the car and we saw priests and religious out moving boxes onto carts,” Fesemyer said.

“My family, we all looked at each other and we’re like, ‘What did we do?'” she continued.

Comfortable in her non-denominational Christian faith, it was not until her second semester when she and her roommate decided to attend a Newman Center retreat. This was when she first experienced the Mass and Eucharistic Adoration.

This first experience with Catholicism led Fesemyer to want to learn more about the faith, and culminated in her eventual decision to enroll in RCIA and become a member of the Catholic Church. She was received into the Church in 2017.

Fesemyer, who wears a prosthetic leg and excels athletically, has had a profound impact at St. John’s Catholic Newman Center.

Father Robert Lampitt, head chaplain, told the Catholic Post, “I couldn’t be happier for Jenna as she’s attained a goal [making the Paralympic team] she’s been aiming for a long time.”

“And yet, the way she bears a faithful witness to our residents and other students is what really impresses me,” the priest continued.

Fr. Lampitt also told the Post, “She shows us all what true perseverance and faith in Christ can achieve, whether that be competing in events or growing in holiness,”

“And she does it all with such grace and humility.” he stated.

Fesemyer, aged 24, told the Post after making the Paralympic team, “I can confidently say that my faith and the support I’ve received from the staff and students at St. John’s have been instrumental in this journey.”

“I wouldn’t be where I am today if I didn’t look to Christ in my time of need or doubt. When we turn to Christ, our joys are multiplied.”