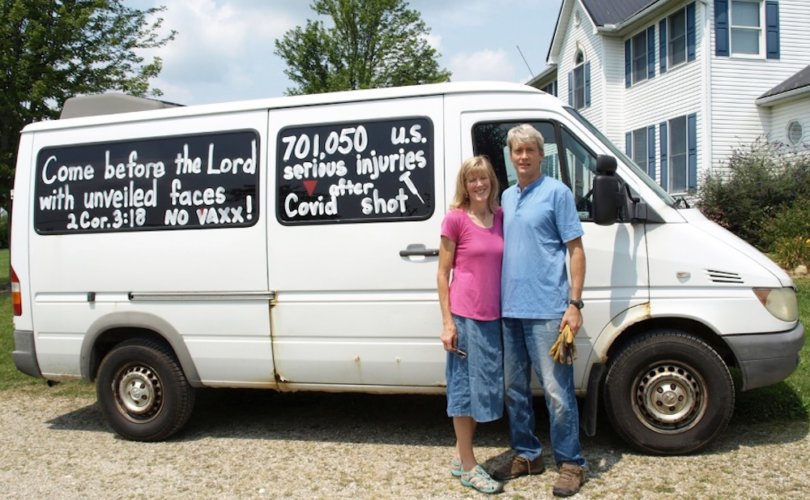 PLAIN CITY, Ohio (LifeSiteNews) — A Midwest small town drama with significance for the entire nation is about to reach its climax as a Catholic mom and dad —disabled military combat veterans, parents of 7 home-schooled children — are about to be sent to jail in retaliation for refusing to wear masks at their local public library and for allegedly placing two small stickers on public property next to the library encouraging others to resist heavy-handed COVID-induced government controls.

This family’s plight is the proverbial “canary in the coal mine” for the entire nation. If a devout Catholic family can suffer COVID-19 mask & vaccine persecution in this tiny Midwest town, it can happen anywhere and to anyone.

Sam and Julie Dean are raising their large family on their homestead outside Plain City, Ohio.

The drama began in January when Julie and her 11-year-old daughter — both maskless — walked into the local public library to pick up books they had on reserve. Library employees refused to serve Julie and her daughter unless they donned masks despite the library’s website COVID-19 recommendations, which say only “Wear a mask if you are able.”

When Julie did not comply and refused to leave without the books, library workers called in police who escorted Julie and her daughter out of the building and informed her: “If you come back to the library, you’re going to be arrested for trespassing.”

In March, Sam and Julie were accused of placing two small, removable stickers on the backs of a “Do Not Enter” traffic sign and a freestanding curbside pick-up box, both located on public property outside the library.  One of the stickers, about half the size of a standard index card, read: “LIVE IN FEAR, It makes you easier to control.”  The other, smaller than a bumper sticker, said, “THERE IS NO PANDEMIC; Your own government is using psychological warfare on you.”

After several scheduled pre-trial hearings in which the county court system failed to provide an Americans with Disabilities (ADA) coordinator for the couple, Sam and Julie were each sentenced by the judge to 90 days in jail, reduced to 2 days.  Additionally, the judge ruled that Sam and Julie must pay court costs and fees totaling $1,300 each, plus do 20 hours of community service and be on probation for one year.

The sentencing, which took place on July 29, requires Sam and Julie to report to the county jail for their 2-day sentences within 30 days.  Time is running out for them to appeal their convictions.

The Deans have long used their First Amendment rights to push back against the extreme measures that state and local authorities have enacted, which the Deans characterize as resulting from “the evil, fraudulent pandemic our government has pushed on us.”

“Our outspokenness on this topic has made us well known in the community and a target of harassment by the authorities,” they explained to LifeSiteNews.

Even the family van serves as a mobile billboard, encouraging their neighbors, “No vaxx!”; announcing VAERS-collected data on deaths and serious injuries resulting from COVID shots; and displaying Bible verses which urge people to think twice about wearing face masks: “‘Come before the Lord with unveiled faces.’ 2 Cor. 3:18.”

‘Your religious beliefs are not going to help you tonight’

In January, Julie explained to the three police officers who came to the Plain City Public Library to confront her and her 11-year-old daughter that due to their sincerely held religious beliefs, they cannot wear face masks.

“So here’s the deal: Your religious beliefs are not going to help you tonight,” responded one of the police officers.

“You are trespassing in the library.  If you come back, you’re going to be arrested for trespassing,” he added.

In March, video presumed to be of Sam and Julie traversing the library parking area on foot, captured by the library’s outside cameras, led to the library’s complaint of criminal trespass.

A second complaint — criminal mischief — was triggered by the discovery of the two small stickers which the library alleged Sam and Julie had placed on the back of the “Do Not Enter” traffic sign and the freestanding pick-up box.

“We have freedom of speech rights,” explained Julie.  “This is a First Amendment thing. There’s nothing that was destroyed or tampered with. They were removable stickers.”

The Deans have found themselves punished for heeding the message on one of the stickers: “LIVE IN FEAR, it makes you easier to control.” Sam and Julie have chosen not to “Live in fear,” which has made it difficult for the small-town, Eichmann-like library workers and police to control them.