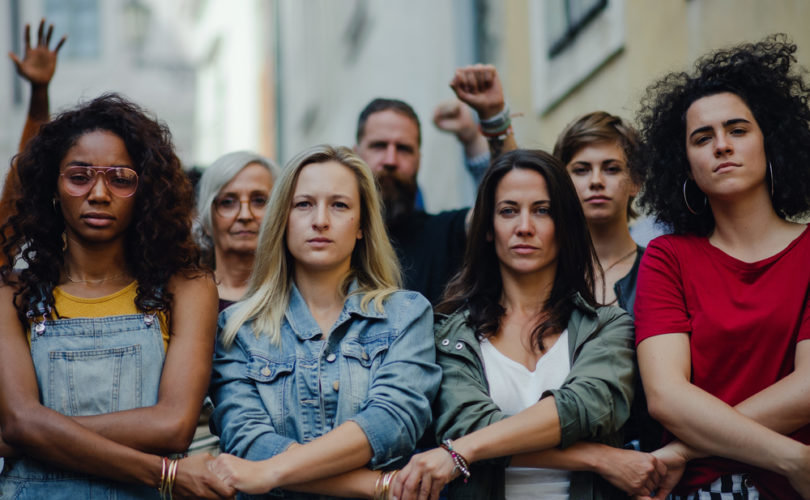 May 31, 2021 update: Protest at the Ottawa Catholic Board will take place at a future date yet to be determined.

May 28, 2021 (LifeSiteNews) — Catholic parents across Ontario are banding together to protest gay “Pride” flags that will be raised at Catholic schools next week in celebration of the pro-homosexual “Pride month.” They will be participating in car rallies, in-person protests, and prayer events.

“Parents have been reaching out to us for advice on what to do if they have children whom they want to protect from LGBT indoctrination in schools in Ontario,” said Teresa Pierre, president of parental rights group Parents as First Educators, in an email to supporters.

The “Pride” flag was created in 1978 by open homosexual and drag queen Gilbert Baker. The flag as a whole, composed of various colored stripes, has become an international symbol of the homosexual movement and its view of the human person and sexuality that is at odds with biology, the social sciences, the world’s major religions, and specifically with the Catholic faith.

The Catholic Church warns about the spiritual dangers of homosexual behavior, teaching that homosexual acts are “intrinsically disordered.” Such behaviors are “contrary to the natural law. They close the sexual act to the gift of life. They do not proceed from a genuine affective and sexual complementarity. Under no circumstances can they be approved,” states the Catechism of the Catholic Church. The Church furthermore teaches that showing respect for people who struggle with same-sex attraction “cannot lead in any way to approval of homosexual behaviour or to legal recognition of homosexual unions.”

Pierre called the flag a “hot topic” that is on the minds of many Catholic parents who are opposed to seeing Catholic schools celebrating “Pride” month.

She said that parents need to do everything they can to protect their children.

Parents as First Educators is organizing car rallies on June 1 to protest Pride flag-raising ceremonies at the above-mentioned Catholic school board offices. The group is also organizing 10-person rallies at the Niagara Catholic board office, as well as schools, that will take place on May 31 at 6:30 p.m. Contact information for more details about the events can be found below.

“Please make respectful signs for your cars and leave them at the board when the rally is over. Someone will collect them and bring them to the board,” Pierre said in an email to supporters.

Angela Braun, a Catholic parent from the Niagara area, told LifeSiteNews that she is helping to organize a “Rosary Rally of reparation.”

“On Monday, May 31, Catholics will be praying a Rosary of reparation for the blasphemy committed against the Immaculate Heart of Mary and the Sacred Heart of Jesus,” she said.

“At 6:30 p.m., the Rosary and other reparation prayers, including exorcism prayers, will be prayed outside all the Niagara Catholic High Schools and outside the Niagara Catholic District School Board. We will also be praying for protection for our youth from the impurity of the LGBTQ agenda, as well as for the souls of the Trustees who voted for this sinful flag, as they are in grave danger,” she added.

Braun also said that her group is preparing to file a complaint with the Catholic board’s Ombudsman that the Trustees who voted to fly the Pride flag violated their own Code of Conduct.

“Their Code of Conduct states, among other things, that they will uphold Church teaching,” she said.

Jack Fonseca of Campaign Life Coalition told LifeSiteNews that parents must send a strong message to Catholic school boards that they will not accept their schools being overrun by activist groups that are opposed to Catholicism.

“United, let us show that parents want Catholic schools to be authentically Catholic,” he said.

Fonseca said that Catholics must pray for their bishops that the Holy Spirit will “embolden” them to end their “strategy of appeasement” with the LGBT lobby so as to “act decisively to protect children from this evil.”

Fonseca also said that Catholics must pray for divine intervention to save the Catholic schools from the “demonic assault” of LGBT activists.

“Ultimately, God is the final arbiter in this heresy called ‘Pride.’ We must plead for divine intervention. We must all pray that Jesus Christ is honoured in our schools,” he said. “These prayers must be unceasing, and for those who are Catholics, should be joined by rosaries, mass intentions and Eucharistic adoration where available. Let us use all the spiritual weapons heaven has provided.”

For Catholic boards, car rallies will be held from 1 p.m. to 1:30 p.m. on Tuesday, June 1, at the following locations:

Halton Catholic District School Board (did not agree to raise the flag, but has approved LGBT indoctrination to students)
802 Drury Lane, Burlington
PAFE contact: [email protected]

In addition to the June 1 rally, 10-person rallies will be held in Niagara at the Niagara Catholic board office as well as at all Niagara Catholic high schools on the evening of May 31 at 6:30 p.m. People who wish to drive by in solidarity are also welcome to join.