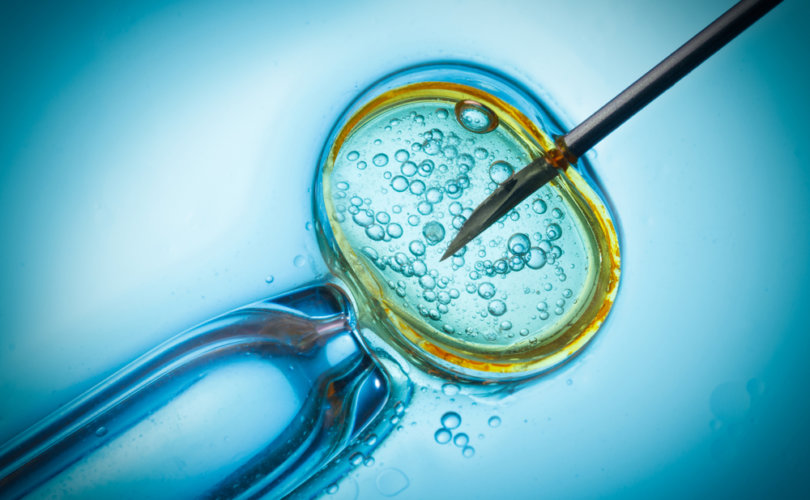 IRELAND, January 3, 2020 (LifeSiteNews) – A Catholic parish in Ireland deleted its entire Facebook page and apologized for “hurt caused” after it posted a pro-life message articulating Church teaching on in vitro fertilization.

The post, which noted that IVF is “completely, clearly and totally incompatible with our Catholic faith,” provoked a negative reaction online and outraged media coverage.

The post was subsequently criticized by Simon Harris, the Irish Health Minister.

The message was posted to the Facebook account of the Tullamore Parish in County Meath, along with an image of Jesus in the womb with a halo over his head and the words “He’s on His way” and “Christmas starts with Christ.”

Let us continue to pray for life.

We pray for couples struggling to naturally conceive life and who are avoiding IVF treatment.

The process of IVF damages embryonic stem cells and thus life and is therefore completely, clearly and totally incompatible with our Catholic faith. For all believers in God, all life is sacred at all times.

All life is beautiful and belongs to God, the author of all life (Genesis 1:27 states that God created man in his own image…“male and female he created them”)

As Catholics — we are unapologetically pro-life and are proud and are honoured to stand up for the voiceless and for the vulnerable unborn persons whom we are called to love, cherish and to bring closer to God.

Thank you God for the gift of our life. May our lives give glory to you and inspire others to protect life.

IVF involves the creation of numerous human embryos by mixing sperm and egg in a petri dish. The created embryos are typically screened for chromosomal abnormalities. Doctors then attempt to transfer embryonic humans who survive that screening to a mother’s womb.

Most of the embryos are never successfully implanted. The “unused” ones are frozen for a time, before being thawed and destroyed. In 2015 a report in the U.K. indicated that more than two million embryos created for IVF procedures had been destroyed since records began in 1990.

The parish has now deleted its entire Facebook page and issued a statement apologizing for the post. Their statement says: “A post published on the Tullamore Parish Facebook page on Christmas Eve concerning IVF has caused great distress to many members of our parish community and beyond. For hurt caused we apologise.”

“Matters concerning fertility are sacred and sensitive, and all children are cherished and God-given, this is the essence of the Christmas message. The parish understands the great suffering experienced by mothers and fathers who long for a child. At this time, we offer our pastoral and prayerful support to all parents and expectant parents.”

The Catechism of the Catholic Church explains that the use of IVF procedures is “morally unacceptable” because “[t]hey dissociate the sexual act from the procreative act” (CCC 2377).

“The act which brings the child into existence is no longer an act by which two persons give themselves to one another,” the Catechism continues, “but one that entrusts the life and identity of the embryo into the power of doctors and biologists and establishes the domination of technology over the origin and destiny of the human person.”

A subsequent section of the Catechism explains Catholic teaching on the conception of children and the respective rights of parents and children. Section 2378 explains:

A child is not something owed to one, but is a gift. The “supreme gift of marriage” is a human person. A child may not be considered a piece of property, an idea to which an alleged “right to a child” would lead. In this area, only the child possesses genuine rights: the right “to be the fruit of the specific act of the conjugal love of his parents,” and “the right to be respected as a person from the moment of his conception.”

According to a report in The Irish Times, the post sparked a “virulent social media reaction” with calls for the person who wrote the post to identify him or herself.

Irish Health Minister Simon Harris called the post an “inappropriate interference in decisions that individuals and couples make about their own lives.”

Harris said that he “thought and certainly hoped we had moved to a point as a country [beyond] this sort of inappropriate interference.”

Harris outlined the Irish government’s plan to regulate IVF for the first time through the assisted human reproduction bill and said that “the idea that any Christian would find that [IVF] objectionable is something I will never understand and I will never comprehend.”

As Health Minister, Harris played a leading role in the introduction of abortion legislation into the Republic of Ireland in 2018.

“Whilst in no way minimising the suffering entailed by infertility, people deserve to know that IVF causes grievous loss of human life, is seriously offensive to God[,] and puts users outside God’s plan for their lives,” said Patrick McCrystal, Executive Director of HLI Ireland.

“Statistics show that almost half of embryos used to help…women conceive through in vitro fertilisation are thrown away during or after the process. No-one is pointing out this horrendous loss of life, and how the technological manipulation of the creation of human life is in severe conflict with the Creator’s plan,” McCrystal stated.

“Tullamore Parish wrote a clear message, consistent with Church teaching, that upheld the dignity of life,” he continued. “The embryo conceived is sacred and inviolable from [the] moment of conception. Church teaching on this subject is rich, beautiful[,] and true.”

“Any parish must be free to discuss, advance[,] and inform parishioners on Catholic Church teaching without being attacked by politicians and the media.”

Anthony Murphy, director of the Ireland-based Lumen Fidei Institute, told LifeSiteNews, “Catholics must never apologise for defending the most innocent and defenceless in our society, namely the unborn child.”

Murphy said that the incident is “troubling on a number of fronts and raises some important questions for the Church in Ireland.”

Murphy expressed gratitude for the initial witness to the Church’s teaching, but concern at the decision to remove the post.

“First and foremost why was the post removed?” he asked. “Clearly someone in the parish thought it was important enough to put it up. But why should it be removed especially at the time of year when our minds are thinking not only of new life but also of the martyrdom of the Holy Innocents?”

“In removing a post which simply explains the moral teaching of the Church the parish has succumbed to the narrative of the secular media that our faith is something to be ashamed of, something which must be hidden and discussed only in private – not only does this approach limit evangelisation it is also deeply offensive to faithful Catholics,” commented Murphy.

“Finally where was the voice of the bishop and why was he unable to support the parish in the midst of this media storm? Our bishops have been quite vocal in the past few months about things in which they have little or no competence – namely immigration policy and climate change – yet they have consistently failed to defend Church teaching from secular attack. The greatest shame here must fall with the bishops who have remained silent while Church teaching has been undermined leaving those on the periphery of our society, the unborn, without a strong voice to defend them.”