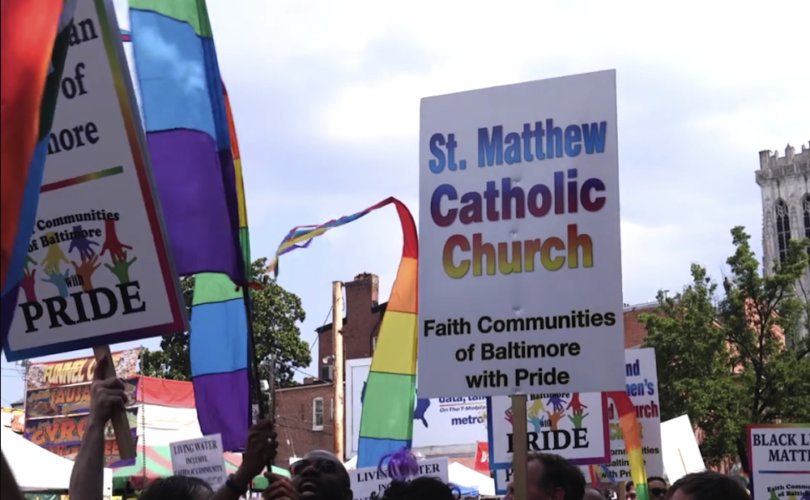 BALTIMORE, Maryland, June 8, 2017 (LifeSiteNews) – In the basement meeting room of Baltimore’s St. Matthew Catholic Church rectory, Rachel Christian dos Passos said she and her “wife” long for a time when “LGBT couples can be equal to straight couples in the eyes of the Catholic Church.”

Her “spouse,” Vania Christian dos Passos, said, “We don't want the crumbs from the table.”

Both want to be fully accepted into the life of the Catholic Church as practicing homosexuals.

If St. Matthew pastor Fr. Joseph Muth had his way, their desire for gay “marriage” would quickly become a reality in the Catholic Church.

At a New Ways Ministry conference in November 2016, Fr. Muth proposed developing a Pre-Cana course designed specifically for gays and lesbians. He went on to say that he already meets with gay couples getting married and has directed them to “older gay couples in the parish” that can offer “the benefit of their experience.”

The St. Matthew pastor has been encouraging homosexuality over the course of several years through a parish ministry and involvement in a dissident homosexual group condemned by the Vatican while getting an apparent pass from the Baltimore archdiocese.

The comments from the Christian dos Passos couple were made to the National Catholic Reporter for its November 2015 report on LEAD, an LGBT-affirming group at Fr. Muth’s parish. The Archdiocese of Baltimore, the Reporter said at the time, officially sanctioned the LGBT group.

Fr. Muth helped found LEAD in 2010 at St. Matthew, and he has led retreats and served on the board for New Ways Ministry, which has been censured by Rome and U.S. Church leaders multiple times for calling itself Catholic while defying Church authority and teaching on sexuality and marriage.

The open dissent at St. Matthew parish was put on obvious display when Fr. Muth performed the baptism of an adopted child for a homosexual couple, a video of which was produced to promote LEAD (LGBT Educating and Affirming Diversity). The video shows the same-sex couple explaining how that because of LEAD, the Catholic parish is a place where they can give their relationship esteem and affirm themselves spiritually.

LifeSiteNews contacted Baltimore Archbishop William Lori’s office several times recently and last year after the baptism video surfaced. An inquiry was sent to Fr. Muth as well regarding how the LEAD group and his involvement with New Ways reconciled with Church principles, but LifeSite did not receive a response.

After a reader of ChurchMilitant.com inquired with the archdiocese regarding LEAD in late 2015, a report on the website said, Vice Chancellor Sean Caine responded to the individual with a statement saying Archbishop Lori and Bishop Denis Madden had met with the LEAD group’s leaders and that any parish ministry is expected to uphold Church teaching.

“Archbishop Lori wishes to continue the dialogue begun with LEAD,” the statement said, “committed to the belief that it takes a good deal of prayer, charity and perseverance to help hearts and minds to be open to the Church's teaching, especially as regards those who struggle with same-sex attraction.”

Both men in the St. Matthew same-sex couple lauded the backing they had gotten at the Catholic parish in the baptism video promoting LEAD.

“The kind of support St. Matthew’s has given us has been tremendous; tremendous in the sense of a place where we can go and honor our relationship with each other,” John Sawyer said. “When we were going through our difficulties with adoption, it certainly was a place where we could go and cry, or just have a place to go spiritually to center ourselves. And it’s also a place for us to dedicate Rosie (the adopted child) to God.”

In addition to Church teaching that marriage is between one man and one woman, numerous studies have indicated that children fare better in homes with heterosexual parents.

“LEAD’s goal is to primarily provide a space where gay people feel welcome,” stated Sawyer in the video. “I think also its job is to provide a bridge between people who don’t have a lot of exposure to other gay people, or understanding of these issues, or who maybe are prejudiced, or whatever the case may be.”

His partner said for many who have had painful experiences “either in our homophobic society at large, or within the Church, there are some fears that there are people in the Church that (for who) it might not be OK to go with your partner or whatever.”

“And so having an outward manifestation — this organization,” Michael Sawyer continued, “says that, not only is it lip service that we say that we’re tolerant.”

All Catholics are called to be chaste

The Church also calls Catholics to unite their suffering with Christ and that salvation comes repentance and turning away from in.

Another video promoting LEAD quotes the excerpts from the Church’s Catechism on chastity and homosexuality, “tradition has always declared that “homosexual acts are intrinsically disordered,” and “under no circumstances can they be approved.”

It then presents Fr. Muth stating, “I don’t think the institutional Church realizes how hurtful they are to homosexual people when they come across so harshly on that issue.”

“This church at a ground level is very different than, like the institutional Church,” Michael Sawyer said in the second video promoting LEAD. “So what LEAD does, is that it also provides a space for gay people to kind of come back, really rethink what the Church may be.”

LEAD supported Maryland’s 2012 redefinition of marriage, marches in the annual Baltimore gay pride parade — the photos of which are featured on its website, and also offers as resources on its website numerous organizations that go against Catholic Church teaching.

LEAD’s vision statement says it celebrates the parish’s diversity and “envision(s) a society that embraces everyone, including those of diverse sexual orientations and gender identities.” The mission statement says the group was “designed to affirm the Lesbian, Gay, Bisexual, and Transgender (LGBT) members of our parish family and the broader community.”

Throughout the LEAD website and on its Facebook page, as well as in the videos promoting the group, affirmation of homosexuality is promoted, with a clear rejection of Church principles regarding marriage and sexuality and an absence of any mention of chastity, repentance or redemption.

Reports indicate the Archdiocese of Baltimore has been aware of the LEAD group since its inception, and while there has been discussion between the archdiocese and the pro-homosexual group, no apparent action has been taken to address its flagrant contravening of Church teaching on sexuality and marriage.

The LEAD webpage says Fr. Muth met several years ago with Baltimore’s previous archbishop, Cardinal Edwin O’Brien, and as a result Fr. Muth had resigned from the New Ways board, but that he continues his “pastoral work” with the homosexual advocacy organization, and indicated no interruption in the work of LEAD.

Commenting in the archdiocese’s Catholic Review newspaper after an October 2014 panel discussion titled “When a Family Member Comes Out,” which he hosted at St. Matthew in conjunction with “National Coming Out Day,” Fr. Muth had conjectured, “The church teaching may or may not change at some point down the road … ”

Newsweek covered the LEAD group in September 2015, and two months later the National Catholic Reporter reported that LEAD operates with the sanction of the archdiocese. The following is from the news piece:

The cooperation with the archdiocese — including a feature story illustrated by a rainbow flag draped over a cross in the Catholic Review, the archdiocesan newspaper — has prevented LEAD from being cast aside and marginalized, said Muth, who has extensive experience in ministry to gays and their families, including leading New Ways Ministry retreats for the past five years.

St. Matthew Church is one of a handful in Baltimore listed in the New Ways website as a “gay-friendly parish,” the criteria for which is that it is “known as welcoming to lesbian and gay Catholics as members and active parishioners,” which could be exhibited through such things as support programs or participation in gay community events.

Baltimore’s 2017 ‘Gay Pride’ events will occur July 19-24. St. Matthew will be selling PRIDE T-shirts after all masses both weekends leading up to the LGBT events.