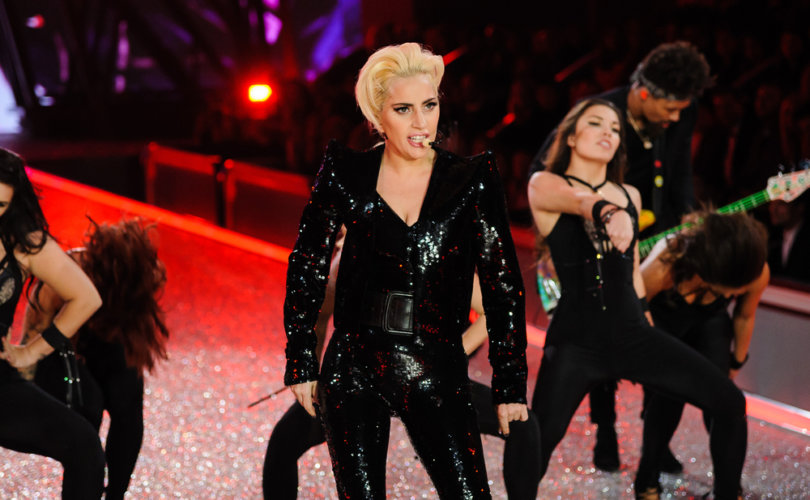 June 2, 2016 (LifeSiteNews) – Blessed Sacrament Church in the Archdiocese of New York has announced that its “Gay Fellowship” group will be partnering with Lady Gaga’s “Born This Way Foundation” to hold a fundraising dance in the parish hall.

According to promotional materials displayed on the parish website, the event, which is styled a “dance party,” is called “Moving With the Spirit,” and will feature “cocktails, cabaret, silent auction, and dancing.” It is scheduled for 7 p.m. Saturday, June 17.

The parish’s “Gay Fellowship” is headed by John Gasdaska, a man who “married” his homosexual partner in 2016 in an Episcopal church. Blessed Sacrament’s administration organized a celebration of Gasdaska’s “marriage” soon after the “wedding,” openly publicizing the event in the parish bulletin.

The money raised by the dance will be used to fund the activities of two homosexualist organizations: the Born this Way Foundation and the Ali Forney Center. It will also raise money for Blessed Sacrament’s “outreach to the poor.”

Carl Siciliano, executive director of the Ali Forney Center, will be present at the dance. Siciliano is a former Catholic monk and self-declared “gay” man who holds that it is “child abuse” and “homophobia” to teach children the Catholic Church’s condemnation of homosexual behavior. He has even produced a video called “Not a Sin” to promote this thesis, in which he claims, “I love my Church, but I’m ashamed at the way it’s hurting children with its teachings.”

“Teaching that homosexuality is evil is rooted in human ignorance and human bigotry,” says Siciliano. “It’s not from God.”

The Ali Forney Center is named after an adolescent drug addict whose career as a petty criminal and transvestite prostitute led to his admission to a group home at age 13, and ultimately his decision to live in the streets, where he was finally shot in the head at age 23, still engaged in prostitution. The Center offers shelter to teens who identify as “LGBTQ” and seeks to give them “pride and security in their LGBTQ identities,” even going so far as to provide them with transsexual “hormone therapy” as well as contraception.

The Born this Way Foundation was created by the singer “Lady Gaga,” who is known for her lurid exhibitionist performances. The name of her organization is the title of a song in which she sings, “No matter gay, straight, or bi, Lesbian, transgendered life, I'm on the right track baby, I was born to survive.”

The pastor of Blessed Sacrament, Fr. John Duffell, who will also attend the dance, is a friend of Lady Gaga who has reportedly counseled seminary candidates to lie about their same-sex attraction to get into seminaries.

A request for comment from Cardinal Timothy Dolan and his director of communications, Joseph Zwilling, was not answered by press time.

The Catholic Church condemns all forms of sexual behavior outside of natural sexual intercourse between a man and a woman united in marriage, and warns that those who die unrepentant of such sins will suffer eternal damnation. The Catechism of the Catholic Church states: “Basing itself on Sacred Scripture, which presents homosexual acts as acts of grave depravity, tradition has always declared that ‘homosexual acts are intrinsically disordered.’ They are contrary to the natural law. They close the sexual act to the gift of life. They do not proceed from a genuine affective and sexual complementarity. Under no circumstances can they be approved.”

Is the Archdiocese of New York dominated by a ‘homosexual mafia’?

Under the leadership of Cardinal Dolan, the Archdiocese of New York has become ever more involved with homosexual activism that openly contradicts Catholic doctrine on human sexuality and even celebrates behavior that the Church condemns as deeply sinful and “intrinsically disordered.” Dolan himself has made a number of public statements casting doubt on his own beliefs regarding homosexual behavior.

In 2014, Dolan publicly congratulated professional football player Michael Sam for declaring himself to be a homosexual. “Good for him,” Cardinal Dolan replied. “I would have no sense of judgment on him. God bless ya.” He added that “the same Bible that tells us, that teaches us about the virtues of chastity and the virtue of fidelity and marriage also tells us not to judge people. So, I would say ‘Bravo.'” The cardinal’s spokesman later claimed that he wasn’t endorsing homosexual behavior.

Dolan has also openly endorsed the inclusion of homosexual organizations in the St. Patrick’s Day Parade, calling the decision “a wise one.”

In 2015, a scandal involving a priest of the Archdiocese of New York in a sadomasochistic relationship with a male prostitute exploded in the mainstream media after officials of the archdiocese repeatedly ignored complaints from parishioners about the priest’s objectionable conduct. Numerous anonymous sources have reportedly told the Catholic activist organization Church Militant that high officials of the archdiocese act as protectors of homosexual clergy, particularly Msgr. Greg Mustaciolo, who is himself accused of being the ringleader of a “homosexual mafia” in the archdiocese.

Special thanks to Catholic activist Joseph Sciambra, who broke this story in two different blog posts, which can be found here and here.