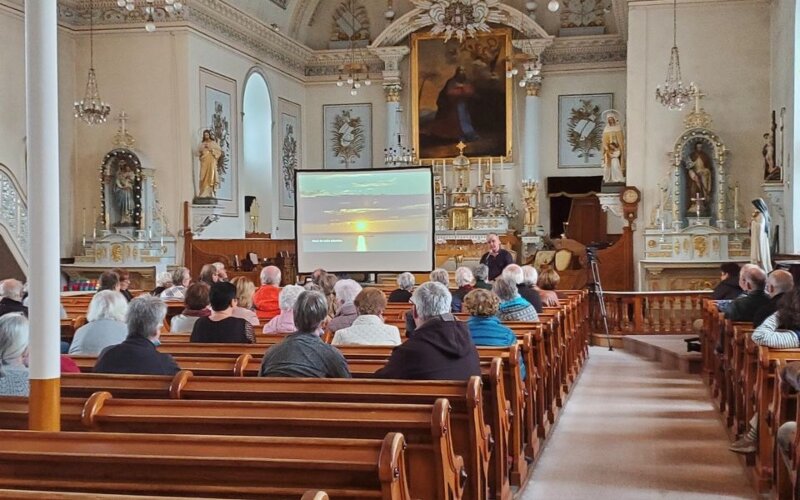 RIMOUSKI, Quebec (LifeSiteNews) — A shocking report by Quebec Life Coalition (QLC) has revealed that a Catholic church in Quebec recently hosted a seminar by a pro-assisted suicide group, despite the practice being outright condemned by the Catholic faith.

According to QLC, the conference on euthanasia – known legally in Canada as “Medical Assistance in Dying (MAiD)” – was organized by the Brigade Verte at Saint-Simon church in Rimouski, Quebec on Sunday, November 6, and featured neurosurgeon and president of the Quebec Association for the Right to Die with Dignity (AQDMD), Dr. Georges L’Esperance.

After the event, Brigade Verte – a secular municipal beautification committee – celebrated the success of the meeting, writing on Facebook: “Dr. Georges L’Espérance’s conference, the right to die with dignity, was a success thanks to the accessibility of information and the humor of the speaker.”

A spokeswoman for the Brigade Verte told QLC it was responsible for connecting the caretaker of the church with the doctor who gave the lecture, but that the meeting was convened to “help the church so there would be a bit of money… all the contributions that were given by attendees were given to the church.”

— Article continues below Petition —
The Quebec College of Physicians must not be allowed murder infants
Show Petition Text
4919 have signed the petition.
Let's get to 5000!
Thank you for signing this petition!
Add your signature:
Show Petition Text

QLC confirmed that this was in fact the case with parish caretaker Beaudoin Gagnon.

Regardless of the stated motivation, suicide – including euthanasia – is strongly condemned by the Catholic Church, with the Roman Catechism stating: “Furthermore, no self-killing. No one has enough power over his own life to kill himself when he pleases. This is why the Law does not say: you will not kill others, but simply: you will not kill.”

The modern Catechism of the Catholic Church also affirms this teaching, saying that “voluntary euthanasia, whatever its forms and motives, constitutes murder.”

Given the scandalous nature of holding an event promoting views directly contrary to the teachings of the Church, QLC asked Gagnon why it took place.

“It was a conference for information purposes… not to recruit them or anything…” he said.

He seemingly brushed off any concern of scandal, stating that not “that many people” showed up, and that there may have only been “70 people in total.”

When pressed further on why it would be considered morally licit to hold the event in the church, Gagnon said it was “a really interesting question,” but that he didn’t have the time to answer.

Before he ended his conversation with QLC, he added that the parish is a “Catholic church in distress,” with very few masses celebrated each year.

The scandal against Church teaching took place in the Diocese of Rimouski, whose bishop, Mgr. Denis Grondin, has demonstrated a strong pro-life stance in the past.

In 2015, he appeared in a video urging people to attend the March for Life in Ottawa.

QLC reached out the bishop’s office, but has not yet received a reply.