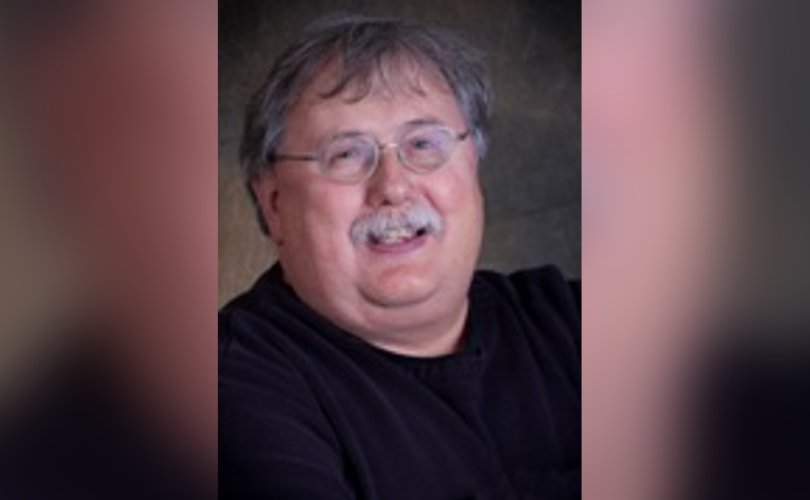 MINNEAPOLIS, Minnesota, February 7, 2019 (LifeSiteNews) – The Catholic pastor who allowed a same-sex couple to present the story of their relationship and surrogate-born baby before Mass has defended his actions.

In his January 27 parish bulletin, Father Jim DeBruycker of the Saint Joan of Arc Catholic Community responded to the scandal that ensued after the parish posted a professional-quality video of the talk online. The pastor indicated he and his associate, Father James Cassidy, had met with their ordinary Archbishop Bernard Hebda and agreed to “better present” Church teachings on the issues raised by the controversy.

However, there was nothing meek about the pastor’s online apology. DeBruycker described the seven minute talk by Alan Nachtigal and Blake Wilson, in which the homosexual men extolled the Catholic community for their acceptance, as a “simple celebration” that was “parsed” by social media into a “credal statement.”

“Last week we had a wakeup call as we celebrated with a couple over their child’s Baptism and how important it is to them to have a faith community,” he wrote of the controversy.

“What was to us a simple celebration was parsed into a credal statement about every aspect of their life and the St. Joan community,” DeBruycker continued.

“Part of the problem was this was put on social media and went, as they say, viral.”

DeBruycker said that he was “sorry for” those who were offended by the presentation but underscored that the event had not happened during Mass. He remained unapologetic about the presentation of a same-sex relationship as a “marriage.”

“Yes, it happened from the pulpit, but before the Mass. It was not meant to be a dogmatic proclamation or a teaching and I am sorry for any who were offended by it,” the pastor wrote.

“It was us, SJA [Saint Joan of Arc], celebrating with our parishioners. Just because the couple is gay does not mean we are promoting a ‘gay agenda’ – whatever that means – any more than we promote every part of our straight parishioners’ ‘agenda’. We celebrate their presence with us as we do with all our community,” he continued.

However, the pre-Mass presentations at “Gym liturgies” at Saint Joan of Arc are a parish institution, showcasing speakers and performers engaged in a number of social justice causes. A review of past and future speakers reveals that the focus of the regular event is not to “celebrate” parishioners.

According to the Saint Joan of Arc Catholic Community webpage:

We invite speakers to teach us ways to change our world. Professionals working with the poor, abused and marginalized enlighten and challenge us to act.  Philosophers and theologians share their perspectives of faith, forgiveness and prayer. Whether they come from South Minneapolis or from the other side of the world, these talented and thought-provoking presenters are a cornerstone and a highlight of our Sunday Liturgy.”

Although DeBruycker denied that the attractive and ovation-winning presentation of same-sex “marriage” and same-sex parenting was part of an agenda, he was willing to admit that the men’s use of IVF and a surrogate was against Church doctrine.

“Many of the online comments were about the issues surrounding surrogacy and in vitro fertilization and what it means in terms of respect for women and life issues,” he acknowledged.

“According to the Church’s teaching, these issues are not recognized as acceptable [sic] and, as many in the parish are unaware of this teaching and its ethical implications, we will look into remedying this through education. Again, I apologize to any who were offended by this and reiterate this was not a credal stance.”

Church teachings against the exploitation of embryos and women in the IVF industry have been articulated several times since the first embryo to survive the procedure was born in 1978. Pope St. John Paul II was particularly vocal on the subject.

“The various techniques of artificial reproduction, which would seem to be at the service of life and which are frequently used with this intention, actually open the door to new threats against life,” he wrote in Evangelium vitae (1995).

“Apart from the fact that they are morally unacceptable, since they separate procreation from the fully human context of the conjugal act, these techniques have a high rate of failure: not just failure in relation to fertilization but with regard to the subsequent development of the embryo, which is exposed to the risk of death, generally within a very short space of time,” he continued.

“Furthermore, the number of embryos produced is often greater than that needed for implantation in the woman's womb, and these so-called ‘spare embryos’ are then destroyed or used for research which, under the pretext of scientific or medical progress, in fact reduces human life to the level of simple ‘biological material’ to be freely disposed of.”

The Catholic Church also teaches that homosexual relationships are immoral and “clear and emphatic opposition” to same-sex “marriage” is a “duty.”

“Basing itself on Sacred Scripture, which presents homosexual acts as acts of grave depravity, tradition has always declared that ‘homosexual acts are intrinsically disordered,’” the Catechism of the Catholic Church teaches (CCC 2357). “They are contrary to the natural law. They close the sexual act to the gift of life. They do not proceed from a genuine affective and sexual complementarity. Under no circumstances can they be approved.”

The Congregation for the Doctrine of the Faith’s document Considerations Regarding Proposals to Give Legal Recognition to Unions Between Homosexual Persons states, “In those situations where homosexual unions have been legally recognized or have been given the legal status and rights belonging to marriage, clear and emphatic opposition is a duty. One must refrain from any kind of formal cooperation in the enactment or application of such gravely unjust laws and, as far as possible, from material cooperation on the level of their application. In this area, everyone can exercise the right to conscientious objection.”

In his January 27 apologia, DeBruycker revealed that he and Fr. Cassidy had a recent meeting with Archbishop Hebda about the scandal.

“[Archbishop Hebda] accepted our apology and understood we were not purposely at odds with him or the Church,” the pastor stated.

“He did request we be more proactive in working with our speakers and he asked us to use this as a teaching moment to better present the Church’s teaching on all the subjects we have been challenged with by this event.”

DeBruycker promised to write an open letter on the website in the coming weeks “about these subjects.”

LifeSiteNews reached out to Fr. DeBruycker to ask, inter alia, if he and Fr. Cassidy believe the Catholic doctrines that marriage is solely a relationship between one man and one woman, that homosexual acts are grave sins, that in vitro fertilization is inadmissible, and that no child should be deliberately robbed of a relationship with his (or any) mother. Fr. DeBruycker did not respond to our email by press time.

LifeSiteNews also reached out to the Archdiocese of St. Paul-Minneapolis. A diocesan spokesman assured LifeSite that a statement was forthcoming, but had not responded by press time.