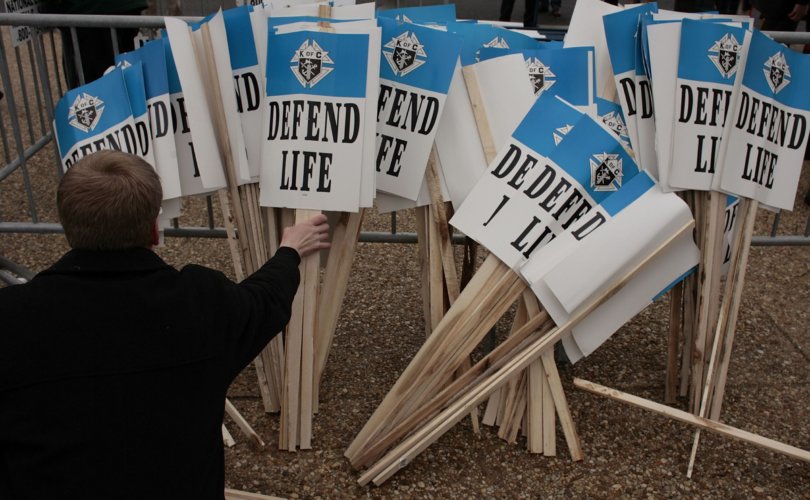 "Defend Life" signs are stacked and given away free to March for Life participants.Photo by Chip Somodevilla/Getty Images

(LifeSiteNews) – A Catholic politician in Scotland is leading the charge to increase access to abortion for women in the country while calling for the implementation of so-called “buffer zones” around abortion clinics prohibiting pro-life activists from peacefully protesting or offering help to women outside of such facilities.

Monica Lennon, a member of the Scottish Labour Party who represents the Central Scotland region in the country’s Edinburgh-based parliament, is an outspoken supporter of abortion, using her political platform to champion “safe access to abortion” and describing the brutal killing of the unborn as “healthcare.”

Last month, Lennon threw her support behind a nationwide “buffer zone” initiative, aimed at criminalizing pro-life protestors who demonstrate in areas around facilities where abortions are carried out. The ban would also prohibit prayerful vigils and other peaceful gatherings from happening within 150 metres (492 ft) of an abortion clinic.

Speaking in Holyrood on May 3, Lennon called upon the Scottish government to hold an “emergency summit” to fast-track the introduction of buffer zones around hospitals which carry out abortions following a leaked draft opinion of the U.S. Supreme Court that would overturn Roe v. Wade, the landmark ruling which introduced legal abortion in all 50 U.S. states.

Noting that the U.S. is “not a million miles away” from Scotland, Lennon argued that the leak proved there is an “urgent need” to remove the right to free assembly and to protest near abortion facilities for pro-life activists.

“All women, regardless of where they are in the world, should have safe access to abortion,” Lennon told lawmakers.

The parliamentarian continued, characterizing the peaceful 40 Days for Life vigil – which gathers on a street opposite Glasgow’s Queen Elizabeth University Hospital during Lent to pray for an end to abortion – as “harassment” and accused attendees of causing “unnecessary trauma.”

According to Britain’s Society for the Protection of Unborn Children (SPUC), the world’s oldest pro-life organization, a 2018 Home Office review concluded that pro-life protests do not include “aggressive activities” and that “introducing national buffer zones would not be a proportionate response” to pro-life gatherings.

In April, however, Lennon penned a letter to Scotland’s Minister for Health, Maree Todd, accusing her of failing to make good on government promises to introduce buffer zones.

“The failure of Scottish ministers to take swift and decisive action has led to an increase in co-ordinated protests … and the protesters are only becoming more emboldened,” the MSP charged.

Lennon’s unwavering defense of abortion and access to it comes despite her apparent Catholic faith. The pro-abortion politician is also reportedly “practicing,” attending Mass and even receiving the Sacraments.

However, Catholic Church doctrine stands in direct opposition to abortion, recognizing the act as directly killing a defenseless child in its mother’s womb.

The Catechism of the Catholic Church teaches that abortion is always “gravely contrary to the moral law,” and attaches the canonical penalty of excommunication to any “formal cooperation” in abortion. A 2004 memo issued by then-Cardinal Joseph Ratzinger identified “campaigning and voting for permissive abortion and euthanasia laws” as formal cooperation, requiring denial of Holy Communion.

LifeSiteNews contacted Lennon’s local bishop for comments regarding her pro-abortion stance as a Catholic public servant, but did not receive any communication.

In comments to LifeSiteNews, Peter Kearney, director of the Scottish Catholic Media Office, explained that Lennon’s position on abortion and buffer zones, particularly as a Catholic, is “incoherent on a number of grounds.”

Kearney told LifeSiteNews that “the Church would expect all Catholics, whether or not they are politicians, to uphold the teaching of the Church, and that would clearly mean that Catholic politicians would be expected to stand up and defend Church teaching.”

By not only supporting abortion as “healthcare” but also the restriction of protests and vigils around abortion facilities, Kearney said, Lennon falls foul of “human rights laws which permit people to express their views and opinions: freedom of expression, freedom of speech, and freedom of assembly.”

Continuing, Kearney said that to suggest that such freedoms be “shut down” is “extremely chilling because that is the beginning of a very slippery slope of intolerance.”

— Article continues below Petition —
PETITION: Call on Biden to condemn violent pro-abortion rioters across America!
Show Petition Text
21371 have signed the petition.
Let's get to 22500!
Thank you for signing this petition!
Add your signature:
Show Petition Text

As an example, the media director suggested that people who gather in a picket line during an industrial dispute or strike and who might be encouraging participation from onlookers would presumably “fail the Monica Lennon test,” since such a demonstration could be viewed as threatening.

“If people felt intimidated or harassed, therefore, they shouldn’t be allowed. So picket lines should be banned by this measure. Demonstrations of every kind would need to be banned,” Kearney noted.

“So, again, by Monica Lennon’s measure, we should have banned those Ukrainians from their silent vigil.”

“This is this is a chilling restriction on freedom of speech, freedom of expression and should not be accepted by the Scottish Government,” he concluded.

Meanwhile, a public consultation on buffer zones was launched Thursday as part of a member’s bill proposed by Green MSP Gillian Mackay, the details of which accuse pro-life activists of harassing women attempting to procure abortions.

“Ultimately, propaganda from media sources, politicians, and activists has sought to smear pro-lifers as harassers to further a pro-abortion, anti-free speech agenda that ultimately leads to more abortion and more heartbroken mothers and fathers,” he said.

Robinson stressed that “pro-abortion untruths” must be dismantled while promising “swift action from SPUC.”

“We must all join now and take action to reject buffer zones in Scotland with full voice. Mothers, unborn babies and their families are counting on us.”