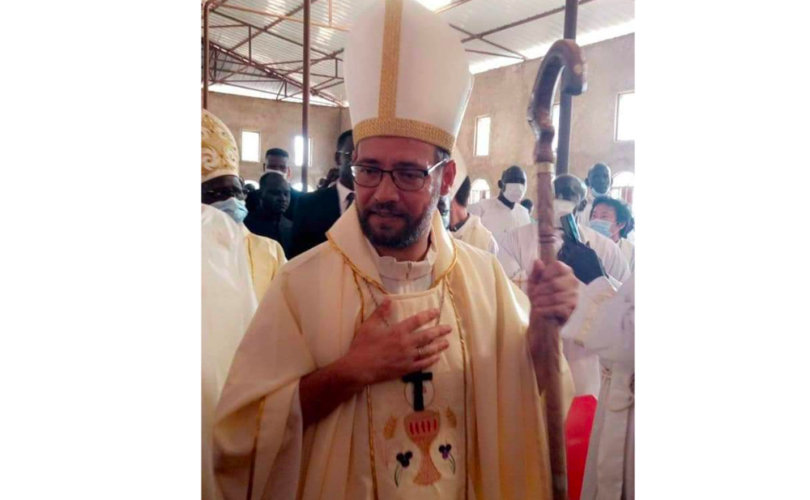 RUMBEK, South Sudan (LifeSiteNews) – A Catholic priest in South Sudan has been found guilty, along with three other men, of shooting Rumbek Diocese’s Bishop-elect Christian Carlassare, and sentenced to seven years in jail.

On April 25 Justice Alexander Sebur Subek, of Juba’s High Court in South Sudan, sentenced Father John Mathiang of Rumbek Diocese to seven years imprisonment without bail, for “inciting and plotting” the April 26, 2021 shooting of Father Christian Carlassare, the bishop-elect of Rumbek.  Mathiang had been the Diocesan Coordinator for over 7 years prior to Carlassare’s appointment as bishop.

Fellow conspirators Sebit Morris Ater and Laat Makur Agok were sentenced to four years in prison for carrying out what has been described as an attempted assassination. A fourth man, Samuel Makir was handed five years in prison for concealing the two guns and providing phones to the would be assassins.

Bishop-elect Carlassare was shot in the legs with three bullets after two armed men shot through his bedroom door shortly before 1:00 a.m. on the morning of April 26, 2021. Father Andrea Osman, who was sleeping in the adjoining room, told ACI Africa at the time that when the men “saw me, they told me to go away. One of them fired two bullets at me.”

Abenego Marol, head of logistics for the diocese, added that the gunmen “shot the door till it opened. After they shot the Bishop, they ran away. It is really a targeted shooting.”

Carlassare was airlifted to hospital in Nairobi, where he spent some months in recovery.

#Bishop-Elect Christian Carlassare is Recovering and #Forgives the Gunmen who Shot him, “Please, let us be united in prayer. Let us be united with all our hearts, to uphold forgiveness in our community …” in #SouthSudan https://t.co/aZHSdIMV5H pic.twitter.com/U5fXOM4LXi

Police originally arrested 35 people in connection with the shooting, though most were released due to insufficient evidence. South Sudanese based Catholic Radio Network reported that while six suspects had been accused, two were released in early March of this year, leaving Mathiang and his three accused conspirators to face trial.

According to local reports, Mathiang’s guilty verdict was given based on an examination of his phone calls prior to the shooting, which were retrieved by the police investigation.

However, the lawyer for the defense protested the sentencing, saying that the judge relied heavily upon the evidence given by Last Makur, who was not cross-examined by the lawyers for the defense. As such, the defense will be appealing the ruling after the mandatory waiting time of 15 days.

The sentences start from the day each man was arrested, meaning that Fr. Mathiang’s seven-year term officially began on May 7, 2021.

Responding to the sentencing, Bishop Carlassare told ACI Africa that he is praying for the “conversion and healing” of his attackers.

“On behalf of the Diocese of Rumbek, we acknowledge today’s verdict,” said Bishop Carlassare. “We appreciate the commitment and dedication of the Government and the Court.”

“Though sad for what has happened and the resulting sufferings, we pray that truth may bring conversion and healing,” he added.

Once the Rumbek diocesan see became vacant in July 2011, a Comboni Missionary, Fr. Fernando Colombo, served as Diocesan Administrator until December 27, 2013, when Fernando Cardinal Filoni – Prefect of the Congregation for the Evangelization of Peoples at the time – appointed Fr. Mathiang as Diocesan Coordinator. Thus the announcement of Carlassare’s appointment on March 8, 2021 would mark the end of nearly a decade without a bishop in Rumbek.

Mathiang served as Diocesan Coordinator for over seven years before Carlassare was announced as the new bishop. The assassination attempt, reportedly incited by Mathiang, came seven weeks after the announcement.

Forty-four-year-old Carlassare was due to be consecrated bishop on May 23, 2021, but following his shooting was eventually consecrated March 25, 2022. A Comboni missionary priest originally from Italy, Carlassare is the youngest Italian bishop and one of the youngest bishops in the world. Ordained priest in 2004, he arrived in South Sudan the same year and has stayed in the country since.

He was received in private audience by Pope Francis March 14, 2022, 11 days before his consecration as bishop at the hands of  Cardinal Zubeir Wako in Rumbek’s Holy Family Cathedral.

Speaking to Fides before his consecration, Carlassare said that he would “start again with tranquility and confidence.”

“The greatest fears were the inner ones: we Italians, Westerners, perhaps we are not used to these situations of uncertainty and precariousness,” he said.

Noting that one of his attackers was a priest, Carlassare said that “the wounds of the country are also reflected in the Church, because of the trauma that the conflict has generated.”

“The wounds of the war and the poverty it caused are still very much alive, they caused a trauma based on fear. This is why I say that the Church must be primarily interested in evangelizing it cannot turn into an agency or even less a business.”

Carlassare referenced a movement within the local church which looks to promote “evangelization of the people” as a central concept, saying that it “bodes well” for the future of Catholicism in Sudan.