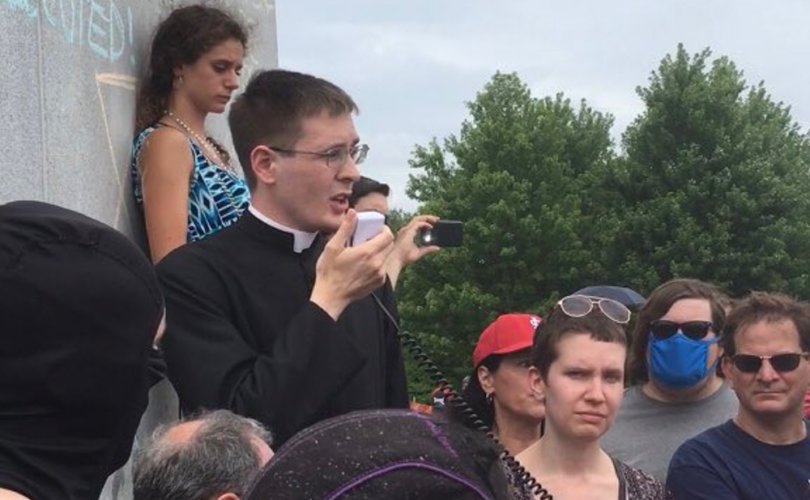 ST. LOUIS, Missouri, June 29, 2020 (LifeSiteNews) — A Catholic priest in Missouri addressed hundreds of angry protestors while defending a statue of St. Louis in the city named after the sainted king on a day when Catholic laity praying at the statue were physically attacked by protestors.

Father Stephen Schumacher, a priest of the Archdiocese of St. Louis, joined Catholic laity in Forest Park on Saturday who placed themselves between the already vandalized statue and activists calling for it to be torn down.

Attempting to inform the protestors of the character and virtue of St. Louis, Schumacher said, “St. Louis was a man who willed to use his kingship to do good for his people.”

Umar Lee, one of the organizers of the protests, had said earlier in the day that the statue “is gonna come down,” as reported by Joel Currier of the St. Louis Post-Dispatch.

Lee said that St. Louis “represents hate and we're trying to create a city of love.”

“It's time for change … right now, our number one mission is to take this thing down and sit down with people who want to see positive change take place and continue to heal our country,” she added.

Sidiqi also said that she thinks the city of St. Louis should be renamed “to celebrate the city’s racial, ethnic and religious diversity.”

The protestors have so far been unable to tear down the statue, and Catholics from the St. Louis Forever Rosary Coalition group have been cleaning the graffiti from its base and organizing daily prayer vigils at the site.

Catholics are beginning to answer the call. Tonight was the largest gathering yet. pic.twitter.com/o7RHzJUAGr

‘Black Lives Matter protesters started to harass, berate, and assault the Catholics [who] were peacefully praying’

On Saturday afternoon a number of Catholics were attacked while praying the Rosary in front of the statue.

“Yesterday, while praying for peace and unity in our city and the protection of the Saint Louis statue, Black Lives Matter protesters started to harass, berate, and assault the Catholics that were peacefully praying,” Connor Martin, one of those praying at the vigil, posted to social media.

“We did nothing in retaliation. We allowed them to spit on us, call us names, put their fingers in our faces, push us, and antagonize, but we did not retaliate. We continued to peacefully pray. One male then came over and said he would attack myself, one other Catholic man, and a Catholic woman that was there if we did not leave. We continued to pray,” Martin continued.

“At that moment someone in the crowd poured an unidentified liquid on the older man pictured below in the comments protecting his head, and was then attacked by a violent individual, also pictured below with his arm pulled back about to attack the elderly man. We got the elderly man out of there safely, and I was about to leave to retrieve my lunch as a friend of mine had just come over to tell me my food had arrived, when the mob approached him. They asked if he was with me, and when he said yes they began to berate him. They took his walking stick from him and when he didn’t react they knocked his hat off of his head, called him a skin head, and attacked him. At this point I intervened to pull the attacker off of my friend, and I was attacked by the mob and the attacker. I have a video attached below of the assault.”

Martin said that he will be pressing charges against the attackers and has called on anyone who you can identify anyone in the videos or pictures to let him know.

“This can not stand,” he continued. “The police were called 6 times by others on the sidelines and never showed up. The righteous must defend themselves, as it appears the government no longer is. I hope Donald J. Trump, Mike Parson, Senator Josh Hawley, Senator Roy Blunt, Sam Page, Mayor Lyda Krewson, and other public officials address this, as if not corrected things will only get worse.”

“Please continue to pray for peace as we go through this frightening time in our [nation’s] history,” Martin concluded.

Martin posted a series of videos of the incidents to social media.

We allowed them to spit on us, call us names, put their fingers in our faces, push us, and antagonize, but we did not retaliate. We continued to peacefully pray.

We got the elderly man out of there, and I was about to leave to retrieve my lunch as a friend of mine had just come over to tell me my food had arrived. The mob then approached him. They asked if he was with me, and when he said yes they began to berate him.

I will be pressing charges against the attackers. If you can identify anyone in these videos or pictures, please let me know. This can not stand. The police were called 6 times by others on the sidelines and never showed up.

Please continue to pray for peace as we go through this frightening time in our nations history.

“Blessed are those who are persecuted for righteousness’ sake,
For theirs is the kingdom of heaven”
-Matthew 5:10

The Archdiocese of St. Louis published a statement on Saturday evening which insisted that St. Louis represented peace and respect for one’s neighbor.

“The history of the statue of St. Louis, the King is one founded in piety and reverence before God, and for non-believers, respect for one’s neighbor. The reforms that St. Louis implemented in French government focused on impartial justice, protecting the rights of his subjects, steep penalties for royal officials abusing power, and a series of initiatives to help the poor,” the archdiocese said.

“King Louis IX’s renowned work in charity helped elevate him to Sainthood. His daily suppers were shared with numerous beggars, whom he invited to the royal table. On many evenings, he would not let them leave before he washed their feet. He personally paid to feed more than 100 poor Parisians every day. His care for the sick was equally moving; St. Louis frequently ministered to lepers. He also created a number of hospitals, including one for the blind and another for ex-prostitutes,” the statement continued.

Statues of Catholic saints are increasingly being targeted in the violent protests that have swept across the country following the death of George Floyd. Last weekend in California protestors pulled down and desecrated statues of Catholic missionary St. Junipero Serra in both San Francisco and Los Angeles, while a group of courageous young Catholics successfully defended Serra’s statue outside Ventura City Hall.

Shaun King, a leading voice in the Black Lives Matter (BLM) movement, has called for the destruction of images and statues of a “white” Jesus and Mary his mother. Another Black Lives Matter activist last week used social media to call on mobs and rioters to protest a Catholic parish in San Diego, saying that the “white” parishioners did not think black lives mattered and they were “staunch” Trump supporters.

Reflecting on the current destruction of Catholic statues across the country, an article published last week on the website of the Priestly Fraternity of St. Peter recalled the words of Bishop John Lancaster Spalding of Peoria and his analysis of the American Know-Nothing riots of the mid-1850s.

“It was not the American people who were seeking to make war on the Church, but merely a party of religious fanatics and unprincipled demagogues who as little represented the American people as did the mobs whom they incited to bloodshed and incendiarism,” Spalding wrote.

“Their whole conduct was un-American and opposed to all the principles and traditions of our free institutions.”