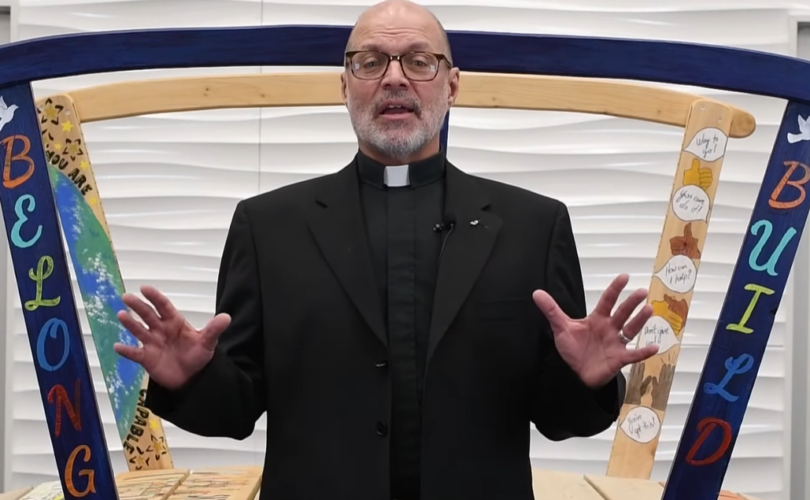 KITCHENER, Ontario (LifeSiteNews) — A Catholic priest appeared in a video for the Waterloo Catholic District School Board to promote “celebrating” so-called “Pride Month” in June.

“Yes, it is the time that those of us who identity as 2SLGBTQIA+ to celebrate who God made us to be,” opened Fr. Joseph de Viveiros, C.R. in a video titled “We All Belong – Pride Month,” posted by the WCDSB on June 1.

“But it’s also time for those of us who do not identify in that way to show our acceptance, love and support,” continued de Viveiros, who is referred to as the WCDSB “Spiritual Animator,” adding, “In our schools, all of God’s children belong.”

Continuing, de Viveiros explains that because people who “identify” as a member of the LGBT community are, like all persons, “made in the image and likeness of God” and “loved” by God, “we proudly fly the rainbow flag to mark ‘Pride Month.’”

While it is true that the Catholic Church and Her members believe that everyone, regardless of circumstance, is loved unconditionally by God, it is also true that an aspect of expressing true love to one another is to discourage sin and instead encourage each person to form their conscience in accordance with the moral teachings professed by the Church.

On the topic of conscience formation, the Catholic Church :

“Conscience must be informed and moral judgment enlightened. A well-formed conscience is upright and truthful. It formulates its judgments according to reason, in conformity with the true good willed by the wisdom of the Creator. The education of conscience is indispensable for human beings who are subjected to negative influences and tempted by sin to prefer their own judgment and to reject authoritative teachings.”

On the topic of homosexuality, the Catechism of the Catholic Church (2357) informs the consciences of the faithful by teaching that “homosexual acts are intrinsically disordered,” are “of grave depravity,” “do not proceed from a genuine affective and sexual complementarity,” and “Under no circumstances can they be approved.”

Despite the clear teaching, de Viveiros concludes the video by saying it is his “profound hope that in celebrating ‘Pride Month’ we may double our efforts to truly be Christian communities … ”

“Happy Pride Month, God Bless you one and all,” the priest concluded.

As written by LifeSiteNews editor-in-chief John-Henry Westen in a recent blog post, pro-LGBT activists, even within the Church, often obfuscate or misunderstand what the Christian virtue of love truly means in an attempt to make the acceptance of the pro-homosexual agenda more appealing to those who take their faith seriously.

“The famous saying from homosexual advocates has always been ‘How can you be against love?’ And the only proper response, although hardly ever used, is, ‘The only reason why we oppose homosexual sexual relations is love,’” Westen explained in the piece.

“We must love them enough to tell them that these behaviors are harmful for them. They are harmful physically, psychologically, and spiritually.”

This point was also made by the Vatican’s Congregation for the Doctrine of Faith in a 1986 document entitled “Letter to the Bishops of the Catholic Church on the Pastoral Care of Homosexual Persons.”

In the document, the Church clarifies for the bishops:

“But we wish to make it clear that departure from the Church’s teaching, or silence about it, in an effort to provide pastoral care is neither caring nor pastoral. Only what is true can ultimately be pastoral. The neglect of the Church’s position prevents homosexual men and women from receiving the care they need and deserve.”

LifeSiteNews reached out to the Diocese of Hamilton, which oversees the WCDSB, but has yet to receive a reply.