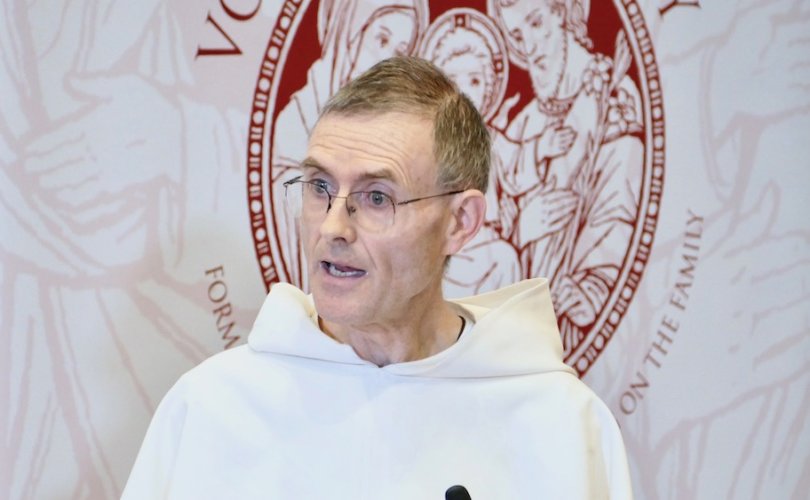 Fr. Kevin O'Reilly speaking at the 2019 Rome Life Forum at the Angelicum.

ROME, Italy, May 27, 2019 (LifeSiteNews) — A Catholic priest has made the case that the “homosexualization of the Catholic priesthood” is at the heart of the “malaise” that has enveloped Western civilization.

In his lecture “Sacrificate sacrificium iustitiae: The Transformation Wrought by the Cross of Christ,” Fr. Kevin O'Reilly, O.P., a professor of moral theology at the Angelicum University in Rome, argued earlier this month at the Rome Life Forum that the undervaluing of the nuptial symbolism of the priesthood, with its dimension of sacrifice for the Bride of Christ, is not just part of the culture of death, but at its heart.

“The homosexualization of the priesthood has probably contributed to the advance of the culture of death in the Western world. Much attention has been afforded to the various phenomena of the culture of death, including homosexual relationships and gender ideology, as well as to their impact on heterosexual marriage and family. Many of those involved in waging battle against these phenomena have been priests and their efforts have been both well-directed and necessary,” he wrote.

“The time has come however to point out that the homosexualization of the priesthood has not only been a part of the wider problem but has also arguably been at the heart of the malaise that has enveloped Western civilization.”

O'Reilly argued that a life of loving sacrifice for others is the fulfillment in the order of grace of the natural law. He holds that the natural inclinations of the human person — to self-preservation, to the procreation and education of offspring, and to the good in accord with the nature of reason — which furnish the basic precepts of the natural law are sacrificial in nature when rightly ordered. These inclinations are brought to their supreme fulfillment by Christ in His sacrifice on the Cross for His spouse, the Church.

Whereas the ordination of homosexual priests is valid, O'Reilly acknowledges, “the fact that they do not experience a natural attraction to members of the opposite sex cannot but obscure the symbolism intrinsic to the Sacrament of Holy Orders. Christ, the Bridegroom, offers his whole being in sacrifice for His Spouse, the Church.”

O'Reilly believes that the rise of homosexuality in the priesthood is tied to the loss of emphasis on the mortification of the flesh and on self-sacrifice, leading to a sacrifice instead of the laity, who “have been sacrificed on the altar of clerical narcissism, particularly insofar as their right to be formed according to the Church’s faith and moral teaching is concerned.”