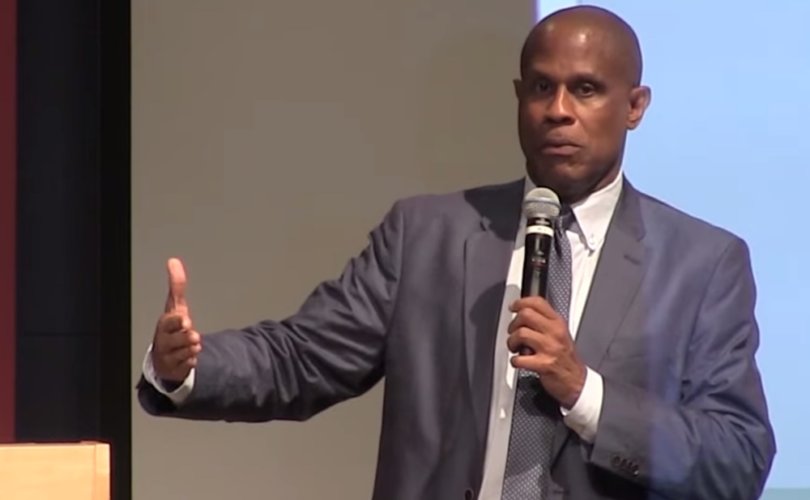 Fr. Bryan Massingale, in an August 6, 2020 article that appeared in U.S. Catholic, also told Catholic parishes that to have “credibility as the church of Jesus Christ” means to offer “extravagant welcome” to “LGBTQ Catholics.”

Massingale is a priest in the Archdiocese of Milwaukee, led by Archbishop Jerome Listecki, and is a professor at Fordham University in New York. Massingale writes regularly for U.S. Catholic Magazine, as well as for well-known dissident publication National Catholic Reporter.

“Speaking of love: Respect LGBTQ families as communities of love who struggle to love as any other family does,” Massingale wrote in his most recent article. “Many among us are raising children who provide both delight and challenge.”

“These families are also ‘holy families’—imperfectly yet truly holy—like every other family in a parish,” he claimed, thereby comparing people in objectively sinful relationships to the Holy Family of Jesus, Mary, and Joseph.

“Even if you disapprove of or do not understand the love that binds a couple together, respect this ‘domestic church’ as an incubator of faith and love,” Massingale continued.

Not surprisingly, pro-homosexual Jesuit priest Fr. James Martin praised Massingale for his article. “This article is a great resource for pastors and parishioners hoping to take the first steps in reaching out to #LGBTQ Catholics,” Martin tweeted.

This article is a great resource for pastors and parishioners hoping to take the first steps in reaching out to #LGBTQ Catholics. Fr. Bryan Massingale is a professor of theology at @FordhamNYC https://t.co/ZsTk1SqeQZ

“Basing itself on Sacred Scripture, which presents homosexual acts as acts of grave depravity, tradition has always declared that ‘homosexual acts are intrinsically disordered.’ They are contrary to the natural law. They close the sexual act to the gift of life. They do not proceed from a genuine affective and sexual complementarity. Under no circumstances can they be approved,” states the Catechism of the Catholic Church.

The Catechism is equally clear on what constitutes a family, stating, “A man and a woman united in marriage, together with their children, form a family. This institution is prior to any recognition by public authority, which has an obligation to recognize it.”

The term “domestic church” is merely another word for family, the Catechism adds.

Massingale, however, is unfazed by Catholic doctrine.

In 2019, he began one of his talks with the words, “I come to this conversation as a black, gay priest and theologian. I am informed not only by my sexuality, my faith, and my study of the Church’s ethical beliefs, but also by the traditions of black freedom struggles in the US, struggles which, at their core, are matters of the soul and the spirit.”

“Some Catholics may feel uneasy, concerned that new discoveries may unsettle previous certainties,” he admitted. “Here we need to recall a fundamental Catholic conviction: Reason and faith are not contradictory.”

For Massingale, this essentially means that faith has to adapt to the newest sexual trends. Massingale did not acknowledge that moral truths of the faith, for instance pertaining to marriage and sexuality, do not change or adapt to various times and places.

The theology professor also discouraged faithful Catholics from attempting to tell the truth to people attracted to members of the same sex.

“Finally, what if parishes or ministers decide that, in conscience, they cannot adapt such a pastoral orientation?” he asked, referring to his proposal of essentially embracing homosexuality and gender ideology as part of Church teaching.

“They should be upfront and say that this is not the place for us,” he responded.

“I realize that some might object, believing that LGBTQ Catholics need ‘the truth’ to save their souls,” he added. “I invite such persons to consider this painful truth: After such zealous counsel, many LGBTQ Catholics have endured dark depression, abandoned religion altogether, engaged in self-harm, and tragically even taken their lives. Are these really risks worth taking out of the belief that you are the appointed agent to save a soul?”

He did not acknowledge that the same risk is also there if they aren’t told the truth.

LifeSiteNews reached out to the Archdiocese of Milwaukee, asking for comment on Massingale’s most recent article. The Archdiocese did not respond.

According to a recent profile in The Revealer, Massingale attended Saint Francis Seminary in Milwaukee from 1979 until 1983.

At the time, practicing homosexual Archbishop Rembert Weakland led the archdiocese. Weakland was eventually found to have mishandled allegations of sexual abuse, shredding reports about guilty priests and allowing those priests to stay active in parish ministry.

During his time at the seminary, Massingale “began to deal with questions of his sexual identity and how to unite his faith, race, sexuality, and aspirations for social justice,” The Revealer wrote.

The priest said, “I realized at some deep place that I wasn’t even consciously aware of that I didn’t see how God could be imaged as black or as gay, and certainly not both simultaneously.”

“That’s when it first dawned on me: The problem is not from God’s side of the equation. The problem is with the Church,” he added, failing to mention that the problem might also be with sinful human beings.

“Prior to his ordination, he had shared that he was gay only with close friends, his spiritual director, and the seminary psychologist,” The Revealer stated.

“In the early 2000s, when same-sex marriage was still not a legal option in most states, Massingale went against the guidance given by the Wisconsin Catholic Conference of Bishops and argued that a person could support same-sex marriage and still be a good Catholic.”