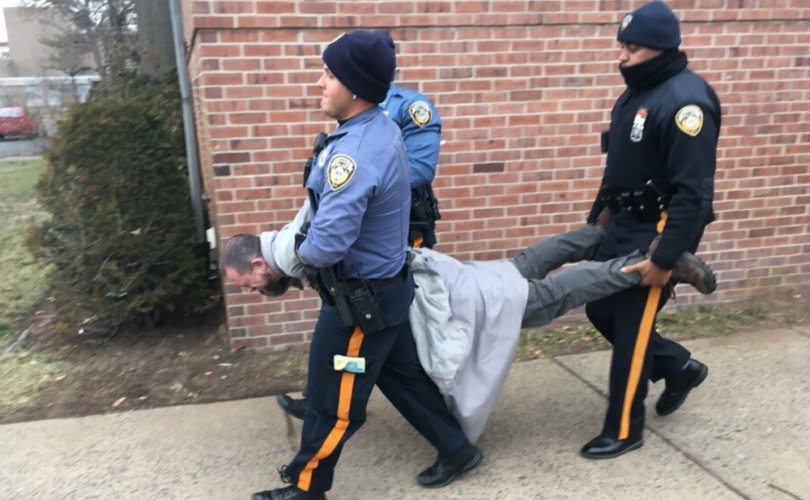 PLAINFIELD, New Jersey, January 18, 2020 (LifeSiteNews) – Five pro-life activists, including one Catholic priest, were arrested this morning for entering and refusing to leave the “Options for Women” abortion facility, offering roses to women inside and begging them not to abort their children.

This is the latest Red Rose Rescue, a budding campaign within the pro-life movement. It comes just days before the anniversary of Roe v. Wade, the U.S. Supreme Court decision that along with Doe v. Bolton legalized abortion on demand around the country.

The Red Rose Rescues are inspired by Canadian activist Mary Wagner. They are something of a revival of successful tactics used during the early days of the pro-life movement, before the Federal Access to Clinic Entrances Act (FACE) imposed harsh penalties on pro-lifers who save babies by physically blocking “access” to abortion facilities.

Notably, no Red Rose Rescuers have been charged under FACE. Today’s rescue is the 15th in the U.S. since 2017, according to organizers. Today’s rescuers were charged with trespassing and were released after several hours in jail, sources on the ground told LifeSiteNews.

The arrested pro-lifers were Will Goodman, Matthew Connolly, Adele Gilhooly, Joan Andrews Bell, and Fr. Fidelis Moscinski, CFR. Bell is a veteran pro-life activist who has spent time in jail for attempts to save babies. Goodman, Connolly, and Fr. Fidelis have all participated in previous Red Rose Rescues. Goodman and Connolly both face felony charges in Michigan for peacefully resisting arrest during a June 7, 2019 Red Rose Rescue.

The Michigan rescuers are the only to face felony charges; a number of other Red Rose Rescue cases have been dismissed or participants convicted of trespassing. Several, including pro-life leader and author Dr. Monica Migliorino Miller of Citizens for a Pro-Life Society, have endured short stints in jail for their Red Rose Rescue activities.

The pro-lifers entered Options for Women at approximately 11:00 a.m. EST. Attached to the roses they distributed were phone numbers of crisis pregnancy centers and a note that said: “You were made to love and to be loved…your goodness is greater than the difficulties of your situation. Circumstances in life change. A new life, however tiny, brings the promise of unrepeatable joy.”

In addition to reaching out to the mothers, the rescuers chose to remain in the abortion facility as an act of solidarity with the unborn children scheduled to be killed by abortionists. The rescuers, like any others who recognize an urgent situation, responded to dire circumstances of imminent peril in a spirit of intervention on behalf of innocent babies and beleaguered mothers.

“The Red Rose Rescue is an act of charity for women who feel for whatever reason they must have their innocent unborn children killed,” said spokeswoman Lisa Hart. “Those who took part were willing to embrace risks for these women and their babies. We will go into the very places where the unborn are put to death and extend help to the moms.”

“Should this help be refused—we will not leave the abortion centers but remain in solidarity with the helpless victims oppressed by the injustice of abortion,” she explained. “Saint Mother Teresa of Calcutta said that her work was ‘to go into the dark holes of the poor.’ The Red Rose Rescue is an action of going into the dark holes of the poor—namely abortion clinics where the innocent are rejected—and in these dark holes we seek to bring hope, true peace, and the presence of God.”

Abortionist Elrick Murray was on the scene at Options for Women this morning. It is not clear if he was able to abort any babies.