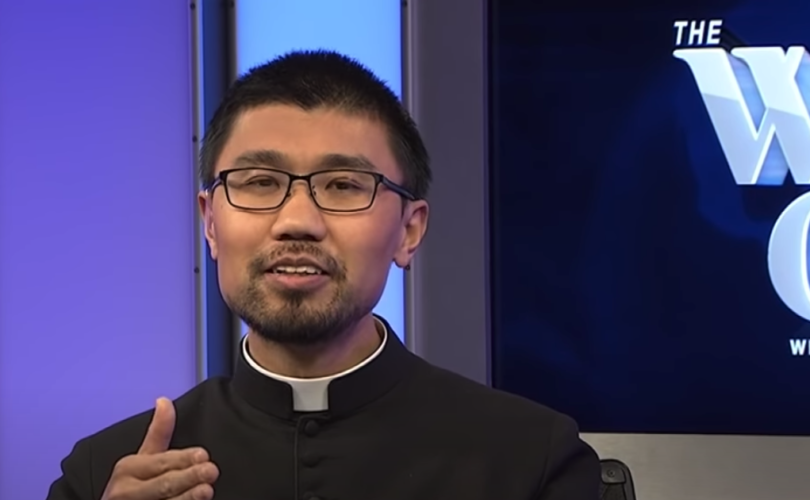 HONG KONG (LifeSiteNews) – A Catholic priest of Hong Kong has revealed that if priests and bishops of the former British colony preach against the Communist Chinese Party (CCP), which is now tightening its hold on the Church in Hong Kong, they will suffer “tremendous consequences.”

Fr. Vincent Woo, canonist and priest of the Diocese of Hong Kong, spoke openly on EWTN about the increased persecution of the Catholic Church by the atheistic communist regime of China. Woo said the CCP, “notorious for breaking its promises,” has already “extinguished” the freedoms that it promised to Hong Kong in the 1984 treaty that Beijing signed with the U.K.

“With the complete elimination of freedom of speech and press and assembly,” Fr. Vincent said, “religious freedom will be the next target in Hong Kong because the CCP wants to control everything in the society.”

Citing the case of a Protestant pastor who was arrested just three weeks ago for comments about the government he had made on his YouTube channel, Woo lamented the “complete violation of free speech” that is now taking place in Hong Kong for anyone who speaks against the government.

Speaking of the obligation of priests and bishops to preach courageously against evil, Fr. Vincent said, “We are called to be prophets. We are called to speak out against injustice in the society, but … that example of the Protestant pastor show[s] priests and bishops in Hong Kong that if you preach something against the government, there will be tremendous consequences.”

When asked about the communist propaganda cliché “sinicization,” Woo explained that “the CCP wants to confuse the two ideas” of “inculturation and sinicization.” Sinicization, he continued, is “conformity of the Gospel teaching, Christian teachings” to “socialist doctrine.” The result is that anything in either Scripture or the teaching of the Church that does not align with communist principles “would have to be cast out … so that all the teachings will be in conformity with the CCP party line.”

Registering with the CCP, the underground Church, and the Vatican deal

Woo was then asked about the Vatican’s instruction to priests and bishops to register with the government. “It would be good to call into mind the heroic example of Cardinal Kung, bishop of Shanghai back in the 1950s,” Woo said. “He refused to register [with] the government. He refused to join the Patriotic Association because he knew that if he does … he is actually placing [the] supremacy of CCP over the Church, placing supremacy of communist doctrine over Church teaching. For that reason he and his priests in Shanghai refused to do that. The consequence was that he was jailed for 33 years in [a] Chinese prison.”

Praising the courage of the underground priests and bishops who refused then and now to register with the government, Woo said that they know that if were they to register they would be “actually going against Church teaching” and “against their own conscience.”

“Being registered civilly,” he added, is “not just signing a piece of paper.”

He explained that when a priest registers he becomes enrolled in a system in which “the government will issue a license to preach, to perform public ministry,” and the renewal of the license may include “attending some indoctrination classes or education sessions.” Woo also said that “if you preach something against the government … they could potentially reveal you or suspend your license any time.”

“So, by being civilly registered,” he stated, priests “actually really restrict religious freedom in that sense.”

“So in the long run,” Woo warned, “the underground Church will not be able to sustain [itself] because of [a] lack of bishops and priests. That’s a huge problem that we’re facing.”

RELATED: Vatican says Cardinal Zen’s arrest should not affect deal with China on appointment of bishops

Another shocking revelation came from Woo regarding Hong Kong’s Christian schools, which amount to 60 percent of the country’s schools. “The plan of the government,” Woo said, “is to impose national security law education in each of the schools from kindergarten through colleges.” This kind of education would essentially amount to “an Orwellian communist agenda being taught in schools,” Woo said. Because of the potential for reporting and arrest for those who say communism is evil, 5,000 teachers resigned last year in Hong.

Examples of faith under persecution

Woo praised the outspoken retired Cardinal Joseph Zen of Hong Kong as a “courageous voice” for the freedom of the Church. Woo said the prelate has inspired many young priest and religious, showing them by his example that “in the face of persecution, in the face of oppression, we have to resist. We cannot cave in. We have to fight to the end; we have to fight till the day we die.” Woo said he thought Zen drew his inspiration from his mentor, Cardinal Kung. He said it was the Shanghai bishop and priests of the underground Church of the ‘50s that “really taught Hong Kong Catholics how we should live our faith under persecution.”

Woo also spoke about the inspiration Hong Kong Catholics draw from Jimmy Lai, a Catholic businessman who ran a newspaper critical of the CCP, recently arrested for his opposition to the party. “He really could have left Hong Kong and enjoy his vacation in Paris or in Tokyo, but he stayed to the end. Why? Because … he wants to suffer with all the protesters who were jailed, who are currently in jail in Hong Kong.”

“That’s an act of solidarity with those who are suffering. So he willingly take[s] up the cross like Jesus did. So, he’s an inspiration to many, and I’m sure that he is inspired by his Catholic faith, the idea of suffering … the value of suffering.”

When asked about the danger to his own person that speaking out about the CCP might bring, Fr. Vincent declared he feared more the judgment of God that he would face were he not to speak out for the suffering Church in China and Hong Kong.

“When I die, when I face God’s judgment, I would have to answer God why I did not speak out in April 2022 for those who are voiceless … I have no choice. I have to do it … I’m the only person who can do it at this moment and I have to be responsible for my omission if I do not.