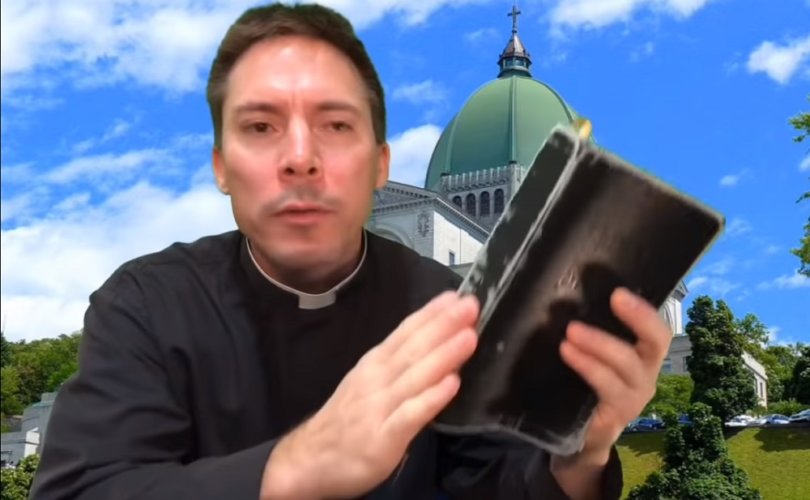 October 7, 2019 (LifeSiteNews) — A Catholic priest is coming out strongly in favor of the Church’s traditional approach to evangelization in the wake of a controversial ritual held in the Vatican gardens before the Amazon Synod that many have characterized as “pagan.”

In a four-minute video posted to YouTube on Sunday, Fr. Mark Goring of Ottawa said he would not follow those who believe that evangelization involves joining in pagan ceremonies.

The video earned an endorsement from Bishop Joseph Strickland of Tyler, Texas, who has shared his own warnings and criticisms about the controversial meeting of bishops. The bishop tweeted: “I nominate Fr Mark Goring to speak to all gathered at the Synod…..I fully endorse his message.”

In his video, titled “Amazon synod and pagan rituals,” Goring said, “I believe that as a Catholic priest, I have the right to choose my own approach to evangelization.” Holding up a Bible, he added, “So long as it is with the word of God and the traditions, the teachings of the Church, I can evangelize.”

Fr. Goring is a Canadian member of the Companions of the Cross religious congregation. He is a former director of the Catholic Charismatic Center in Texas and is now the pastor of St. Mary’s Parish in Ottawa, Canada.

“I don’t have to go along with those who say we have to dialogue with the pagans, that we have to accompany the pagans in their pagan rituals,” Goring said. “Like the Pentecostals and the evangelicals do in the Amazonian area, they go in there with their Bibles and they proclaim fervently and with love that God so loved the world that he gave His only-begotten Son. The evangelicals and the Pentecostals, we can criticize them all we want, and I know that their approach and their theology isn’t perfect.”

Holding up a Bible again, he said, “But they get one thing right: they preach Jesus. They don’t dialogue with the pagans. They don’t accompany the pagans in their pagan rituals.”

On Friday, Pope Francis again stirred controversy by participating in a ceremony that included pagan elements. He consecrated the Amazon Synod to the memory of St. Francis of Assisi while leaders of various Amazonian peoples offered prayers for the Earth. A tree that had been brought from Assisi was planted ceremoniously during the event. The pope observed while a man went to his knees and appeared to kiss a mound of dirt. Discarding his prepared remarks, the pope then recited the Lord’s Prayer as the other participants gathered in a circle. The garden event was organized by the Order of Franciscan Friars Minor, the Pan-Amazonian Ecclesial Network, and the leftist Global Catholic Climate Movement. The Global Catholic Climate Movement serves to “coordinate Catholic engagement in the Paris Agreement” and promote “Climate Strikes” and “fossil fuel divestment” to youths. After the event, participants were seen kneeling and bowing to statues that appeared to depict pregnant women or Mother Earth.

According to Vatican News, “various religious congregations and representatives of the indigenous people of the Amazon Region played important roles in providing colour and creativity” for the tree-planting ceremony.

Signaling his discomfort with the Amazon Synod, Bishop Strickland tweeted earlier that he prayed that “all bishops gathered will remember their sacred duty to guard” the Catholic faith. “Jesus Christ is God’s Son & the savior of all humanity His Gospel can not be diminished. He must increase, we must decrease.”

As the Amazon Synod begins in Rome lets us pray that all bishops gathered will remember their sacred duty to guard the Deposit of Faith. Jesus Christ is God’s Son & the savior of all humanity His Gospel can not be diminished. He must increase, we must decrease.

Catholic writer Christopher Manion retweeted the bishop’s comment and wrote: “Amen, brother. For 40 years, evangelicals have told Latin Americans, ‘Catholics preach politics, we preach the Bible!’ Of course, that [has] been true in the United States as well — and throughout the hemisphere, tens of millions of Catholics have left the pews. Heckuva job.”

Of course, that been true in the United States as well– and throughout the hemisphere, tens of millions of Catholics have left the pews.