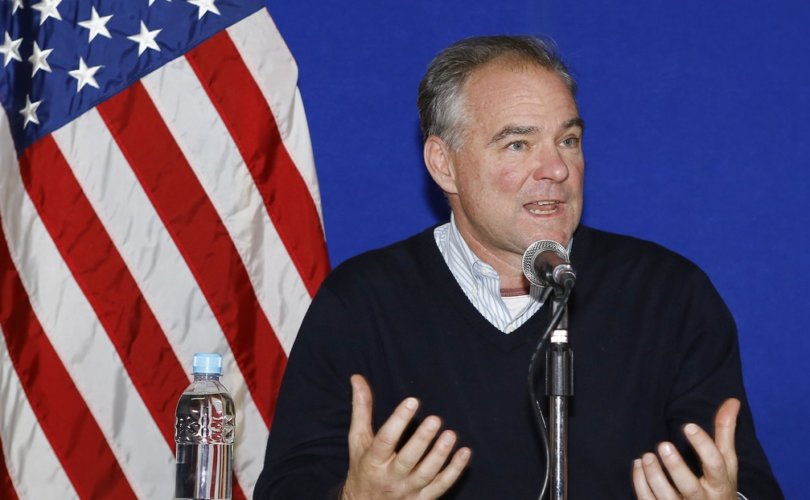 WASHINGTON, D.C., July 25, 2016 (LifeSiteNews) — A Catholic priest asked that pro-abortion Vice Presidential nominee Tim Kaine “do us both a favor” and not show up in his Communion line.

“I take Canon 915 seriously. It'd be embarrassing for you & for me,” tweeted Dominican Father Thomas Petri, the vice president and academic dean of the Pontifical Faculty of the Immaculate Conception at the Dominican House of Studies.

Senator @timkaine: Do us both a favor. Don't show up in my communion line. I take Canon 915 seriously. It'd be embarrassing for you & for me

Canon 915 of the Code of Canon Law instructs that those “persevering in manifest grave sin are not to be admitted to Holy Communion.”

The Catechism of the Catholic Church teaches, “Human life must be respected and protected absolutely from the moment of conception. From the first moment of his existence, a human being must be recognized as having the rights of a person — among which is the inviolable right of every innocent being to life. … Since the first century the Church has affirmed the moral evil of every procured abortion. This teaching has not changed and remains unchangeable. Direct abortion, that is to say, abortion willed either as an end or a means, is gravely contrary to the moral law…Formal cooperation in an abortion constitutes a grave offense” (CCC 2270 – 2272).

As a U.S. senator from Virginia, Kaine has crusaded for the expansion of abortion on demand while claiming to be personally pro-life and a faithful Catholic. His stance on abortion has evolved to the left over the years. In 2005, Kaine supported abstinence-based sex education and measures to reduce abortions. He also came under fire from NARAL for authorizing the sale of “Choose Life” license plates. But once he was elected to the senate in 2012, Kaine became much more vocally pro-abortion. As a senator, he co-sponsored a bill to undermine pro-life laws across the country.

“I’m a strong supporter of Roe v. Wade and women being able to make these decisions,” he has said. He has also said he is “personally opposed” to abortion.

In September 2015, Kaine used Pope Francis’ visit to the United States to criticize Republicans for trying to vote on a pro-life bill.

“The Republicans attempted to use the forthcoming Papal visit to force a vote on a federal abortion ban that has already been struck down by numerous federal courts as unconstitutional,” Kaine wrote on Facebook. “Because it clearly violates the 14th Amendment and 40 years of Supreme Court precedent, I voted against it.”

“Nothing in my Catholic faith suggests that I should support legislation that violates the Constitution,” he continued. “In fact, I take an oath as a Senator to support the Constitution, ‘so help me God.’ Instead of using the Papal visit as just another political opportunity, I encourage my Republican colleagues to do what I and my Democratic colleagues plan to do this week. Truly listen to him.”

“This is someone that the progressive community can be proud of,” Clinton campaign manager Robby Mook told CNN after the announcement.

Mook downplayed Kaine’s past support of parental consent for minors obtaining abortions, a ban on partial birth abortion, and opposition to public funding of abortion. Mook pointed to Kaine’s100 percent rating from Planned Parenthood during his time in the senate.

“He has said that he will stand with Secretary (Hillary) Clinton to defend a woman’s right to choose,” and repeal the Hyde Amendment, which bans federal funding of abortions, Mook said.