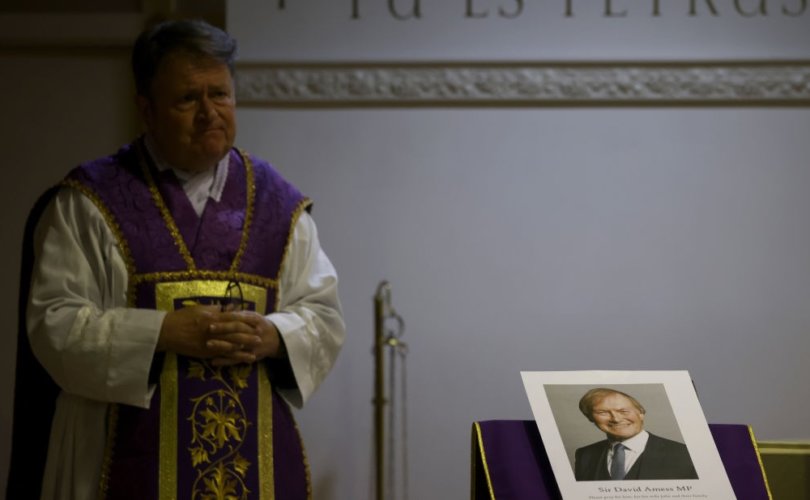 UPDATED: ESSEX, U.K. (LifeSiteNews) —  A British M.P who was stabbed to death was unable to receive the last rites yesterday as police would not allow a Catholic priest to access the crime scene. Essex police has not yet made known the reason why.

According to an article published in the Daily Mail on Friday, as news broke that Conservative British M.P., Sir David Amess, had been stabbed, Father Jeffrey Woolnough made his way to the crime scene to administer the last rites. He found the area cordoned off by the police who did not allow him to access to the crime scene. Sir David Amess, a Catholic, eventually died of his injuries without receiving the last sacraments of the Church.

At around 12:05 on Friday, Amess was attacked by a 25-year-old man, and stabbed multiple times as he was holding a meeting with constituents in Belfairs Methodist Church in Leigh-on-Sea, Essex. Attempts by paramedics to stabilize him did not succeed and at 2:39 p.m, Essex Police announced that Amess had died at the scene.

The alleged attacker has now been identified as Ali Harbi Ali, a British national of Somali origin.

The Daily Mail later reported that, as word of the stabbing spread, “a Roman Catholic priest, Father Jeffrey Woolnough, arrived at the police cordon stretching across tree-lined Eastwood Road North, offering to administer the last rites to the devoutly Catholic MP.” However, the Essex police didn’t allow him to approach the dying M.P, arguing that they could not let him enter an active crime scene.

LifeSiteNews was able to get in touch with Fr. Jeffrey Woolnough who gave us his version of the events.

“As the local priest here in Leigh-on-Sea, as soon as I found out about David, I went running up there to see how serious it was,” he said.

When he arrived at the scene, Woolnough found the whole area cordoned off by Police.

“I told one police officer ‘if he is dying, I need to anoint him,’” said Woolnough, recounting that the same police officer did in fact radio his team to ask whether the priest could be allowed in, and waited for a reply which unfortunately came back negative: “I’m really sorry Father, but they can’t let you in,” the police officer said.

Woolnough speculated that the police may have had safety concerns for him in the midst of an ongoing terrorist attack, or that Amess was already dead and that forensics teams were already present when the request was made.

“I didn’t know what was going on over there, nobody knew at that point,” said Woolnough.

The priest recalled seeing a helicopter and told LifeSiteNews, “At that point I thought, ‘if they’re already airlifting him, I could say some prayers and try to find out where they’re taking him.’”

He then decided to lead a public recitation of the rosary, inviting everyone present to pray for Sir Amess.

Woolnough said he was saddened that he could not administer the last rites, but he suspects the police must have had a serious reason for not letting him access the crime scene.

So far, the Essex police has not given Woolnough or the public a clear explanation as to why he could not be allowed to approach the dying M.P. only citing “the nature” of the crime scene as Woolnough reported in the the Daily Mail “the officers said that because it was a crime scene, and also [because of] the nature of the scene, it just wasn’t possible.”

The decision has generated shock and anger amongst British Catholics who took to Twitter to demand an explanation from the Essex police.

Columnist and writer Tim Stanley tweeted today that the report by the Daily Mail was “very distressing to read” and asked to see “a full explanation of this decision by the Essex police.”

The Mail reports that a priest tried to give Last Rites to Sir David but was denied access on the grounds that this was a crime scene.
This was very distressing to read and I’d like to see a full explanation of this decision by @EssexPoliceUK. pic.twitter.com/YkeLrExukW

Fr Christopher Phillips, Vicar of Saint Mary’s Willesden (Church of England), re-tweeted Stanley’s post adding, “Nobody should ever be prevented from receiving the Last Rites. @EssexPoliceUK have serious questions to answer, and ‘it’s a crime scene’ doesn’t cut it.”

Nobody should *ever* be prevented from receiving the Last Rites. @EssexPoliceUK have serious questions to answer, and “it’s a crime scene” doesn’t cut it. https://t.co/dxuqkxiMaZ

Father Jeffrey Woolnough took a more cautious approach and discussed the need for more dialogue with police forces on this issue, as well as the great deal of ignorance surrounding the importance of the last rites for Catholics.

“There’s a lot of ignorance around this,” said Woolnough, “for instance, many people don’t know that you can still anoint conditionally even when the person has apparently already died.”

The priest then called for more awareness to be raised on this issue and for more collaboration and dialogue between priests, police officers and paramedics.

“We need to work together,” he said.

Woolnough told LifeSiteNews that this was not the first time he had been denied access to minister to a dying person and argued that priests should be granted the same level of access to crime and accident scenes as paramedics.