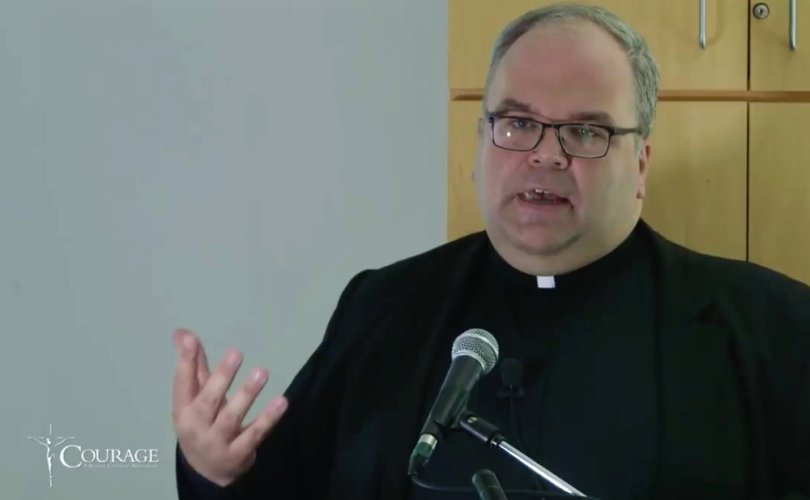 May 24, 2018 (LifeSiteNews) – Scores of LGBT activists, some of them Catholic, have praised Pope Francis for allegedly saying God “made” certain people to be homosexual. At the same time, however, a Catholic priest and director of a ministry to same-sex attracted persons, has posted a video rebuttal to the ‘God made you gay’ argument.

Over the weekend, Chilean church abuse victim Juan Carlos Cruz said that the pope told him in a recent meeting, “that you are gay does not matter. God made you like this […] You have to be happy with who you are.” The Vatican has refused to confirm, deny, or clarify the quote, citing the privacy of one-on-one papal audiences.

On Wednesday, Courage International associate director Fr. Philip Bochanski shared a video that has since been picked up by outlets such as Church Militant and the National Catholic Register, in which he explains why divinely-intended homosexuality would be fundamentally incompatible with Catholicism.

Courage is a Catholic apostolate that specializes in spiritual support for individuals struggling with same-sex attraction. The video is an excerpt of a speech on Christian anthropology Bochanski delivered in July 2016.

“From the perspective of faith, the story of creation, and the church’s perspective on it shows that there is one plan for all human beings, based on complementarity, permanence, fidelity that lead to union,” he explains, but if “God creates a person with homosexual inclinations,” that would necessarily have one of two implications, neither of which can be true.

Either God changed the plan’s rules “sometime after he inspired the sacred author to write” it without telling His followers, or the plan remains in effect but “God set some people up for their entire life with unfulfilled desires, that he sets them up at least to be frustrated if not to fail.”

“God doesn’t work like that,” Bochanski said simply. “That’s not the God that we believe in.”

Bochanksi next quoted the Congregation for the Doctrine of the Faith’s 1986 Letter to Bishops on the Pastoral Care of Homosexual Persons, written by Joseph Cardinal Ratzinger, the future Pope Benedict XVI.

The individual “can hardly be adequately described by a reductionist reference to his or her sexual orientation,” the letter reads. Instead, the Catholic Church “provides a badly needed context for the care of the human person” by insisting “that every person has a fundamental Identity: the creature of God, and by grace, his child and heir to eternal life.”

“The person is created male or female on purpose by God, the complementarity among men and women allows for sexual union, which is an image in the world of God’s love for us,” Bochanski continued, and in order to fulfil that purpose, “it has to be permanent, faithful, based on complementarity, and open to life.”

Following this path leads to the “fulfilment of our dignity and our destiny,” he said, but the premise that homosexual desire confers a special exemption to that plan “short-circuit[s]” that explanation.

“To do that to another person or to let a person define himself or herself in that way is a disservice to the human person,” Bochanski concluded.

Pro-LGBT activists have celebrated Francis’ words, while traditional Catholics and social conservatives have expressed alarm that the pope reportedly contradicted church doctrine stating that while homosexual persons deserve “respect, compassion, and sensitivity,” homosexual acts are “intrinsically disordered” and can be approved “under no circumstances.” The Church teaches, furthermore, that the same-sex inclination is itself an “objective disorder” and represents for most a “trial.”

The quote is the latest in a string of troubling comments by Pope Francis that seem to suggest his support for homosexuality.