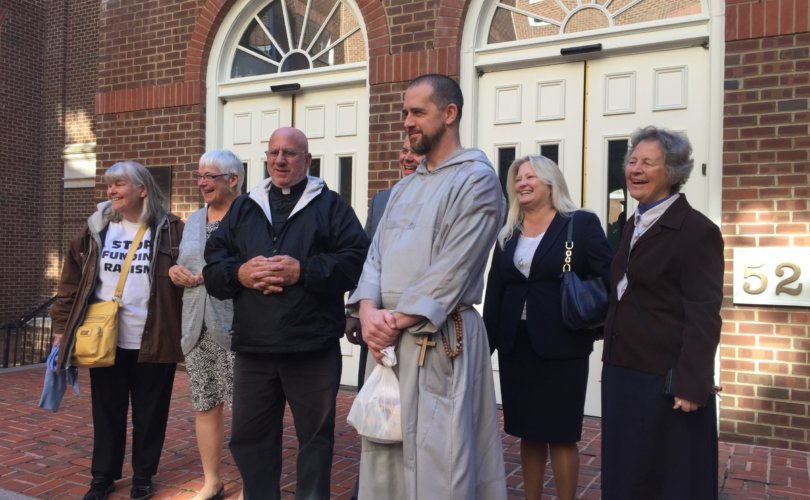 The pro-life activists were found guilty of trespassing and each given a $500 suspended fine. If they don’t trespass inside the abortion facility for the next year and maintain good behavior, the fine will be waived. They were found not guilty of obstruction of justice.

Inside that waiting room on September 15, 2017, they gave pregnant women roses and encouraged them to choose life. Police removed the activists from the facility, Alexandria Women’s Health Clinic, as they passively resisted arrest. The activists called this a “Red Rose Rescue.” It was because they passively resisted arrest, requiring wheelchairs to haul them out of the abortuary, that the pro-life activists were charged with obstruction of justice.

One of the priests, Father Fidelis Moscinski of the Franciscan Friars of the Renewal (CFR), told presiding Judge Donald Paddock that he would not pay any fines because he considers them unjust, and would similarly consider any jail time to which he was sentenced “illegal.”

“I consider this Court’s judgement of me as guilty invalid and therefore any subsequent incarceration illegal,” he said.

Fr. Fidelis is a soft-spoken, gentle, serene friar who wears sandals without socks year-round as part of his religious habit.

Fr. Imbarrato is known as the “protest priest” and participates in pro-life activism around the country. He has offered Masses on EWTN and is a post-abortive father himself.

Bell is a seasoned pro-life activist who has participated in dozens of rescue-style operations across the country. The prosecutor only listed some of Bell's previous convictions as she argued for Bell and others who have done past rescues to be punished more harshly.

Lauren Handy of Mercy Missions told LifeSiteNews this was likely because it would have taken too long to list all of Bell’s life-saving rescues.

Paddock did not sentence Bell more harshly than the others.

Canadian pro-life activist Mary Wagner, who has conducted similar rescues in her own country and served jail time for them, was present in court today to observe the trial.

“I’m glad we did what we did,” McKee told LifeSiteNews. “The babies just matter so much…I hope we can keep up and eliminate the killing of pre-born babies and help to educate people to love their children.”

“I’m very hesitant to rejoice in victory – so to speak – because I don’t think there’s really any victories or rejoicing until pre-born child killing comes to an end,” Fr. Imbarrato told LifeSiteNews. “This is just a small hurdle that we got past.”

“I think it shows that God wants us to continue discerning and praying about Red Rose Rescues and surely that’s what…my conscience has come to” make me believe, the priest concluded.

None of the activists were charged under FACE, the Clinton-era Freedom of Access to Clinic Entrances Act that makes blocking abortion facility entrances severely punishable under federal law.

Judge Paddock allowed defense attorney Chris Kachouroff to argue that what the six activists did on September 15 was necessary to save the lives of other humans. He ultimately said the argument wasn’t applicable to the trespassing charge.

During his cross-examination of Alexandria Women’s Health Clinic receptionist Jerilyn, Kachouroff asked her to specify what types of services the facility offers. She was extremely hesitant to admit that the “services” her employer commits are abortions.

Of the defendants, Jerilyn was only able to identify Fr. Fidelis.

Kachouroff put Catherine Flandez, the facility’s head nurse and assistant administrator, on the spot during her cross-examination as he asked her if the “services” being provided were for the mother or the fetus.

Such questions “inherently assume a view of the world” not compatible with the witness’s worldview, said Judge Paddock. But he allowed Kachouroff to press Flandez on the issue slightly.

Alexandria Women’s Health Center is located in Landmark Towers, which has some businesses on its lower floors and apartments on the upper levels.

The building’s “resident manager,” Cecilia Gondor, and Alexandria City Police Officer Matthew Bramhall testified about an unusual arrangement they have.

Bramhall is given discounted rent in exchange for helping with building security when he is off duty as a police officer. It was suggested that it’s his job to “enforce the law” there while off duty.

Bramhall was in full uniform on his way to testify in another court case when he received a call about the Red Rose Rescue. He was off duty.

Returning home to deal with the rescuers on behalf of his landlord caused him to be “slightly delayed” for his other court appearance, he testified. Bramhall waited inside the abortion facility lobby telling the pro-lifers to leave for about 20 minutes before on-duty officers arrived.

Kachouroff pressed him on whether he actually remembered the six defendants given that he encounters hundreds of people because of his job.

“It’s probably something I’ll remember forever” because of the Catholic priests, the officer testified.

Gondor refused to admit whether she knows the facility to which her company leases space commits abortions. She would only call it “women’s services.”

Kachouroff asked that just as a landlord would likely know that a dentist works on teeth, wouldn’t Gondor be aware of the speciality of any doctors in her building? Gondor seemed to be annoyed by this question and questions about how closely she has actually read the lease.

“Women’s Health Clinic, Inc. is proud to be the first choice in gynecology and abortion services for women in the Virginia, Maryland, Washington, D.C. and West Virginia area,” its website, which prominently advertises abortion, says.

Officer Jonathan Lopez, one of the responding officers, said that he repeatedly told the six pro-lifers they “needed to vacate the premises.” He testified that they told him they wouldn’t leave unless the facility closed for the day and stopped “killing babies.”

Lopez was the officer who took Fr. Imbarrato into custody.

‘We heard that at Nuremberg’

Kachouroff’s closing statement focused on Virginia’s fetal homicide law and how the six pro-lifers were acting in necessity to defend others from being killed.

Section 18.2-32.2 of the Virginia state code of law prohibits fetal homicide and allows those who kill a fetus to be charged with doing so.

Judge Paddock didn’t think it was an unfair argument, although he said general district court was an unusual place for this kind of debate to take place. But these cases have to start somewhere, he said, so he was willing to entertain the argument.

Kachouroff noted that no officers intervened on behalf of the pre-born humans even though the pro-life activists told them babies were being killed.

“We heard that at Nuremberg,” he said.

Kachouroff argued that civil authorities have a duty to protect the lives of their fellow humans. He said that the judge would have to say that a fetus is not a person if he were to reject such arguments.

Kachouroff then quoted Martin Luther King, Jr., who said that there can be a “moral responsibility” to disobey unjust laws. The six red rose rescuers don’t think laws against trespassing are unjust, he explained, but rather think that laws allowing other human beings to be killed through abortion are unjust.

“My clients were expressing the highest respect for the law,” he said. They were there not to trespass but to “stop the killings of babies.”

Praying, distributing roses, and giving abortion-minded women pamphlets is “not what’s encompassed by defense of others,” the prosecutor argued. She said an example of the “defense of others” would be if someone acted to stop another who had pulled out a knife.

AbortionProcedures.com explains that in a second trimester dilation and evacuation (“D&E”) abortion

the abortionist uses a sopher clamp — a grasping instrument with rows of sharp “teeth” — to grasp and pull the baby’s arms and legs, tearing the limbs from the child’s body. The abortionist continues to grasp intestines, spine, heart, lungs, and any other limbs or body parts. The most difficult part of the procedure is usually finding, grasping and crushing the baby’s head. After removing pieces of the child’s skull, the abortionist uses a curette to scrape the uterus and remove the placenta and any remaining parts of the baby.

It explains a first trimester abortion this way:

A suction, or aspiration, D&C abortion is a procedure in which a suction catheter is inserted into the mother’s uterus to extract the preborn baby. Tools are then used to scrape the lining of the uterus to remove any remaining parts.

‘As a Catholic priest, I must say to this Court that abortion is murder’

Judge Paddock said that the law the pro-lifers were charged with violating was not a segregation law, but rather was “the law that prohibits people remaining on the land of another” after being asked to leave.

“The defense of others I find is inapplicable in the case at hand,” he said. “I’m in no way attempting to…adjudicate the claims of the defendants.”

Judge Paddock said he simply saw it as a trespassing case and would treat it as such.

“I think there needs to be punishment, your honor,” the prosecutor said.

Judge Paddock then ordered the six pro-lifers to reappear in court on November 20, 2018. Provided they don’t enter the Alexandria abortion facility again, at that time their $500 fines will be rescinded.

“Your Honor, a unique human individual begins to exist at the moment of conception,” Fr. Fidelis told Judge Paddock in a prepared statement. “In a sane, civilized society that new human being would have his or her right to life clearly recognized in the law.”

“But we do not live in a sane, civilized society,” he said. “Since Roe v. Wade in 1973, we live in a nation, Your Honor, that has permitted the legal destruction of millions of innocent children.”

“As a Catholic priest, I must say to this Court that abortion is murder and no law or court decision can make legitimate what is intrinsically evil,” Fr. Fidelis continued. “Legalized abortion is an abomination in the eyes of God.”

Speaking louder but still in his signature gentle manner, Fr. Fidelis said, “now is the time for all of us to repent of our complicity in this national evil.”

“It is time to seek forgiveness from God, in the name of His Son, Jesus Christ,” he said. “It is not too late to turn away from sin and begin to respect the gift of life and the laws of God.”

“In finding me guilty, this Court has refused to recognize the humanity and value of pre-born children,” Fr. Fidelis concluded. “Since I stand here in solidarity with them, may God give me the grace to bear witness on their behalf.”