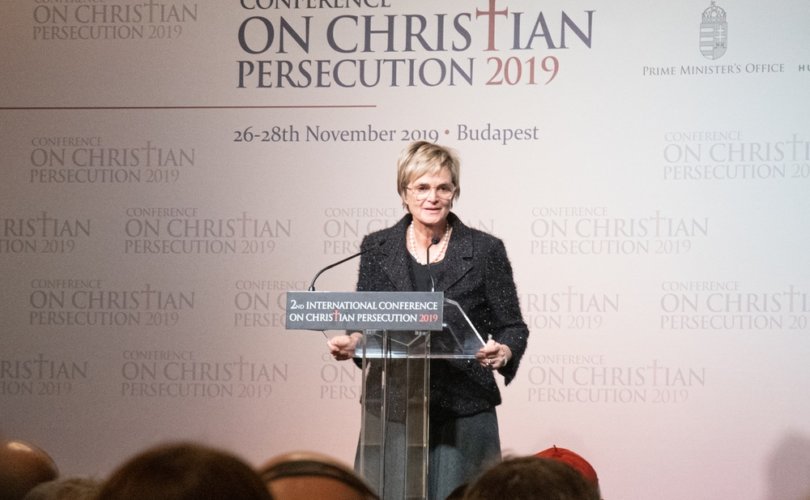 December 5, 2019 (LifeSiteNews) – Princess Gloria von Thurn und Taxis – Catholic thinker, businesswoman, philanthropist, and artist – gave a rousing speech in Budapest, Hungary, on the definition of Christian-based human rights, and on how these rights are under attack in the West today.

Speaking at the 2nd International Conference on Persecuted Christians convened Nov. 26-28 by the Hungarian Government, Princess Gloria reflected on how various legal protections, which had been the cornerstone of Christian civilization, are now in danger of being eradicated from society.

Protections, which society formerly gave to human life from conception till natural death, to marriage between one man and one woman, and to religious freedom, have all been substantially degraded, warned the Princess, signaling a dangerous shift in priorities.

“The West is obsessed and worried and totally taken by global warming and animal life. But, where have we come to if animals and plants have more [legal] appreciation than human beings?” asked the Princess.

Commenting on how all-pervasive has been this change in priorities, she underlined the point, by stating: “Even the Pope has proclaimed a ‘global emergency’ for climate.”

Princess Gloria went on to criticize people in the West for wanting to live in a “natural and healthy” environment while accepting the “most atrocious and unnatural and unhealthy proceedings” when it comes to the human species.

“We all want to live in a natural and healthy environment. But, how is it, then, that we accept and tolerate the most atrocious and unnatural and unhealthy proceedings when it comes to our own species,” she said.

“Take, for example, hormone treatment. Hormone treatment for egg harvesting, for surrogate mothers, for surrogate children. Or, take the unhealthy sex-change. How unnatural is that? And, how traumatizing for body and soul is it when you rip apart the baby and suck it out of its mother’s womb? Or, euthanasia,” she continued.

“And, this is happening today. Now! And, all of this, while we are all obsessed by eating natural and organic food,” she added.

Ending her commentary on a hopeful note, the Princess said that, by the grace of God, and through a miracle of prayer, some countries in the world, like Poland, Hungary, the United States, and Brazil, “have stopped the culture of death, and have now joined the promotion of Christian-based human rights.”

She concluded by encouraging all political leaders to follow the good example of the above countries, and others who have refused to kowtow to the UN on so-called “reproductive rights”, all in a heroic effort to “save Christianity”.