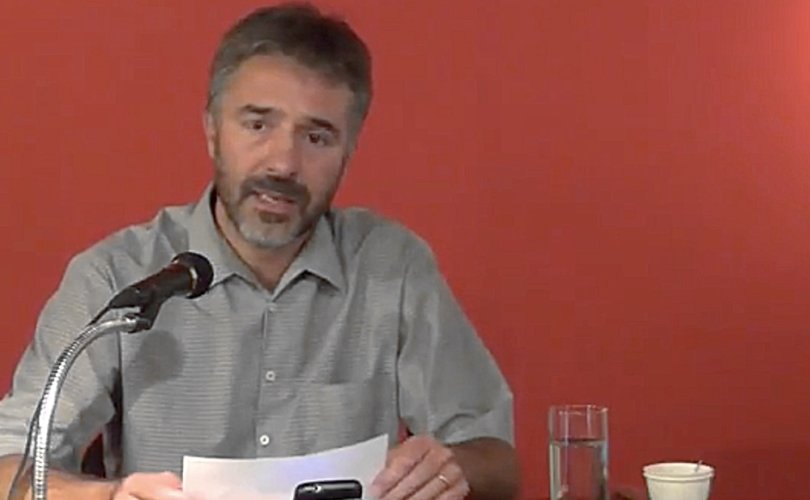 BUENOS AIRES, January 16, 2020 (LifeSiteNews) — A Catholic professor of philosophy has been dismissed by a bishop from his teaching post at an Argentine school of theology after the scholar posted criticisms of Pope Francis made by Vatican whistleblower Archbishop Carlo Maria Viganò.

Bishop Gabriel Mestre of Mar del Plata, Argentina, dismissed Dr. Maximiliano Loria from the diocesan University School of Theology. According to Dr. Mario Caponnetto, a respected Catholic physician and blogger, the reason for the dismissal was because Loria posted on his Facebook page a letter by Archbishop Viganò, who once served as the Vatican’s diplomatic representative in Washington D.C. Vigano has been a vocal critic of Pope Francis and has even called for the current pontiff to resign.

According to Dr. Caponnetto’s report at the AdelanteLaFe website, Loria said that he posted Archbishop Vigano’s letter on Facebook “in order to make manifest that things are not going well in the Church. I respect the Pope,” he said, but added that many of the Pope’s words and gestures are “incomprehensible.”

As an example, Loria cited the adoration of pagan idols that the Pope countenanced in the Vatican Gardens and inside the Basilica of St. Peter during the Amazonia Synod that was held in Rome in October.

Vigano’s letter appeared on the Corrispondenza Romana website on Dec. 19, and makes grave accusations against Pope Francis. Writing of the “failed pontificate” of the current pope, Vigano accused Francis of seeking to dismantle the See of Peter by abusing its supreme authority to sow division and confusion.

“Material heresies, formal heresies, idolatry, superficiality of every kind: the Supreme Pontiff Bergoglio never ceases stubbornly to humiliate the highest authority of the Church, ‘“demythologizing’ the papacy,” Vigano wrote, adding that the Pope violates and disfigures the Catholic faith through “duplicity and lies..”

According to the report by Dr. Caponnetto, it was Bishop Mestre himself who called Dr. Loria by telephone to inform him of the dismissal. The report claimed that the bishop told Loria that posting Vigano’s letter proved that the professor is not loyal to “Pope Francis’s magisterium” and is thus unworthy of teaching at a Catholic institution. Days later, Loria received further official notification of his dismissal.

In response to an email from LifeSiteNews, a spokesman for Bishop Mestre refused to answer any questions posed about the dismissal. An email to Professor Loria went unanswered.

There is evidence, however, that Bishop Mestre and his school of theology approves of dissident clerics. In April 2019, the bishop invited progressive German monk Anselm Grün, the author of dozens of books on spirituality. Having received public praise by Pope Francis, Fr. Grun admitted to the German newspaper Augsburger Allgemeine that “fundamentalist circles” have said that his theology and spirituality are “heretical.”

Affirming his differences with Catholic doctrine, he said that there are “no theological reasons” to oppose the naming of a female pope, the ordination of women or married men to the priesthood. Saying that he works with homosexual priests, he said that they are “good priests.” He added, “They can speak with us openly about their problems and they feel that they are being accepted.”

Bemoaning Dr. Loria’s dismissal, Dr. Caponnetto wrote: “Once again, something that we already knew has been confirmed: a Catholic professor, of firm doctrine and assayed witness of fidelity to the Church is not allowed to teach in a Catholic university. And this is in the name of synodality, pluralism, mercy, dialogue, defending the common home, and ecological conversion. A masterpiece of hypocrisy.”

Bishop Mestre was named to the diocese of Mar del Plata in 2017 by Pope Francis, a fellow Argentine. Mestre is the former chancellor of the University School of Theology.