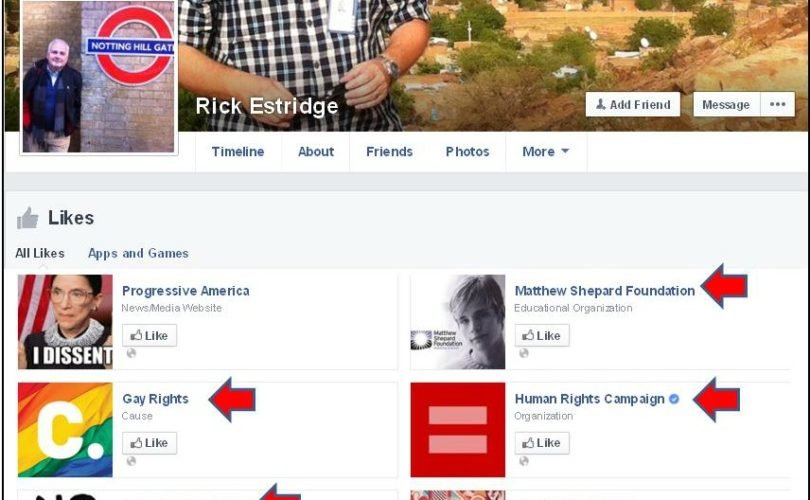 Update April 20: In keeping with our regular practice, we contacted Catholic Relief Services on Friday morning for a response prior to publication, and gave them a deadline of 4pm. In this case they did not respond. However, by Monday morning, Estridge's LinkedIn and Facebook profiles were taken down.

BALTIMORE, MD, April 20, 2015 (LifeSiteNews.com) — As Catholic bishops throughout the U.S. face attacks for requiring Catholic teachers not to support same-sex “marriage,” new evidence shows that a vice-president at the bishops’ own foreign relief agency is himself “married” to another man.

Public records show that Rick Estridge, Catholic Relief Services’ Vice President of Overseas Finance, who has worked for the U.S. Bishops’ official international humanitarian agency since as long ago as 2001, “married” his homosexual partner in Baltimore, Maryland, on April 4, 2013.

The Lepanto Institute obtained the public marriage record from the City of Baltimore for Estridge and William Goretsas, Jr. The document confirmed the homosexual “marriage,” which took place the same month that Estridge was promoted by CRS to a vice president role, according to Estridge’s LinkedIn profile.

Estridge’s information on the professional networking site details his employment history totaling 14-plus years within CRS, including positions as Director of Overseas Finance for five years, Senior Technical Advisor for Finance and Emergencies for two years, and Manager of Finance and Administration for Relief for nearly four and a half years. CRS records from 2001 indicate Estridge was a Country Representative for Kosovo.

Estridge has also used social media to promote his views against Church teaching.

On his Facebook page, he “likes” numerous pages for homosexual activist groups, including Gay Rights, Human Rights Campaign, Matthew Shepherd Foundation, Freedom to Marry, The Next Family, and NO H8 Campaign.

On the Human Rights Campaign Facebook page, Estridge thanked four politicians that introduced legislation benefitting homosexual couples “for their courageous leadership.” In a post on the Facebook page for Progressive America, Estridge suggested sending Oklahoma State Rep. Sally Kern to the prison for terrorists at Guantanamo Bay because she filed legislation against homosexual “marriage” and indicated the idea that ‘homosexuality is normal and healthy’ is more dangerous to young people than terrorism.

“This vice president is flouting Catholic moral teaching by living in a homosexual union and engaging in homosexual activism online,” said Michael Hichborn, president of the Lepanto Institute, which uncovered the documentation. “Personnel is policy, so it's a fair question to ask how his lifestyle and activism have influenced policy at CRS.”

“If CRS is willing to elevate a man in a homosexual union to an executive position, would it do the same for someone who commits surgical abortions in his spare time?” Hichborn asked. “It's a fair question since both acts are so violently opposed to Catholic teaching.”

A history of hiring employees opposed to Church teaching

Catholic Relief Services claims that it “seeks to advance the common good of the world through the uncommon excellence of our staff, partners and programs,” but the organization has a history of hiring employees with strong ties to pro-abortion and pro-contraception organizations.

The most flagrant perhaps was Daphyne Williams, who was hired despite the fact that her LinkedIn resume showed she had previously worked at two openly pro-abortion groups, one of them called “Pro-Choice Resources.” (According to her LinkedIn profile, Williams left CRS in 2012, the month after LifeSiteNews highlighted her in a report.)

Another employee, Charisse Espy Glassman, was convicted of assault in 2011 for ramming her car into a crowd at the D.C. March for Life. A victim of the assault, who suffered two herniated disks, reported that Glassman had seemed to laugh as she drove into the crowd.

Dr. Amy Ellis, currently CRS’ Health Policy Advisor & Regional Advisor for Asia, was hired in 2011 directly from the pro-abortion group Population Services International, which CRS has funded in the past despite the fact that its purpose is population control and one of its major projects is marketing abortion drugs.

Ellis contributed to a paper by PSI employees on “global contraceptive needs” that was delivered at the International Conference on Family Planning in Senegal from Nov 29 – Dec 2, 2011, while she was on CRS’ staff. And in May 2012, she represented CRS at the Women Deliver conference in Bangladesh, a regular gathering of pro-abortion activists focused on achieving “universal access to reproductive health.” The session she joined included a focus on “revitaliz[ing] family planning.”

Stephen Phelan, Human Life International's director of mission communications, pointed to Article 7 of Pope Emeritus Benedict XVI’s 2012 Apostolic letter On the Service of Charity, which states that Catholic charitable agencies “are required to select their personnel from among persons who share, or at least respect, the Catholic identity of these works.”

“To ensure an evangelical witness in the service of charity, the diocesan Bishop is to take care that those who work in the Church’s charitable apostolate, along with due professional competence, give an example of Christian life and witness to a formation of heart which testifies to a faith working through charity,” the Motu Proprio added.

‘Is the Catholic faith central to the mission of CRS?’

Steven Mosher, president of the Population Research Institute, said CRS should be held to the same standard as a Catholic high school in West Des Moines, Iowa, that recently faced criticism for declining to hire a man engaged to another man.

Commenting on that issue recently, Bishop Richard Pates said, “While we respect all persons and civil law in regard to civil unions, the Church teaches based on natural law, Scripture and the Church's 2,000-year tradition that marriage is a sacrament between a man and a woman. The Catholic faith is central to our mission as a Catholic school and is an exercise of religious liberty. To deliver on that mission, it is our expectation that staff and teachers support our moral beliefs as they are the models of our Catholic faith.”

According to Mosher, “Bishop Pates’ comments here could also apply to CRS.”

Hichborn also directed attention to recent steps on the part of dioceses in Ohio and California to strengthen Catholic identity in their schools and confirm that faculty uphold Catholic teaching, as examples for CRS to follow.

“CRS needs to follow suit,” said Hichborn. “If they don't, then CRS is operating above and outside the actions of local bishops.”

“An organization that touts itself as being Catholic should–of course–hire practicing Catholics in good standing,” Mosher said. “This CRS steadfastly refuses to consistently do. And we see the results here.”

“Catholic donors may wish to reconsider whether they would like their donations to go to an organization whose employees, by their actions, make a mockery out of the sacraments of the Church,” Mosher continued.

Hichborn asked how CRS’ internal oversight could be taken seriously when its own vice president of overseas finance is living in a homosexual “marriage,” and further questioned how many other CRS employees could be openly living lifestyles in violation of Church teaching while paying lip-service to Catholic principles.

“With a vice president living in a same-sex union, CRS has lost all credibility and cannot be trusted to conduct its own investigations,” he said. “It's high time the bishops took a closer look at our research and stopped taking CRS execs at their word. A full and complete, independent audit of all of CRS projects must be conducted.”