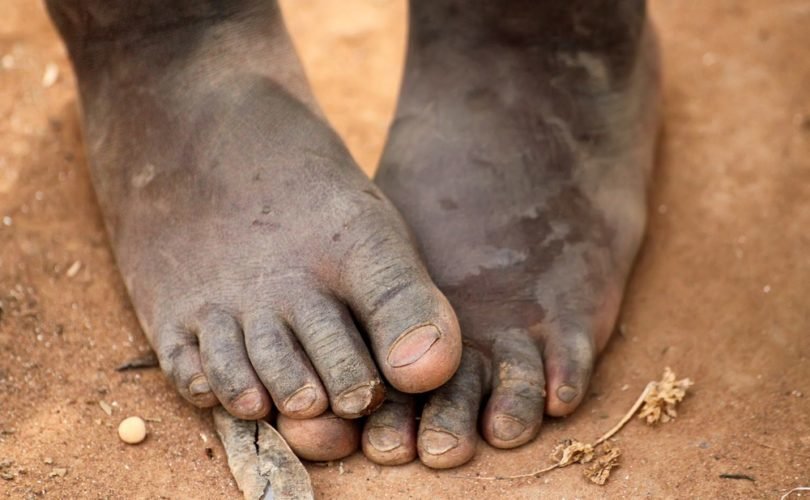 While some pro-life activists are criticizing Catholic Relief Services (CRS) after a high-ranking executive said last month that the agency is “proud” they do not discuss faith with the people they serve, CRS itself is defending the statement, saying it was misinterpreted.

The controversy began when Bill O’Keefe, CRS’ vice-president for government relations and advocacy, told CNN’s Belief Blog, “We assist people of all backgrounds and religions and we do not attempt to engage in discussions of faith.”

“We’re proud of that. We like to say that we assist everybody because we’re Catholic, we don’t assist people to become Catholic,” he added in the August 9 piece.

“We assist people of all backgrounds and religions and we do not attempt to engage in discussions of faith.”

The statement drew criticism from Catholic pro-life and pro-family groups, who said the comments are another sign that the U.S. Bishops’ foreign relief agency has shed its Catholic identity and effectively operates as a secular NGO.

“How great is it that Catholic Relief Services is serving the poor and marginalized in dangerous areas of the world,” Father Shenan Boquet, president of Human Life International, told LifeSiteNews. “Yet how sad that CRS spokespeople again boast that they do not preach the Gospel love of Jesus Christ, as a matter of policy.”

“This is so radically out of line with what Pope Francis has repeatedly said,” Father Boquet added, “and is something that Pope Benedict warned against in both Deus Caritas est and Caritas in Veritate.”

“For CRS to be ‘proud’ of the fact that it doesn't evangelize may help it to get grants from the federal government,” said Steven Mosher, president of Population Research Institute. “After all, such activities are specifically forbidden to federal grantees. But it is an abdication of their responsibility as Catholics – really everyone's responsibility as Catholics – to spread the Gospel.”

“The bottom line is that there can be no division between charity and the work of evangelism,” he said.  “But CRS just stated that it is ‘proudly’ doing just that.”

But in reality, he argued, charitable works “are the loving tools by which we evangelize. Any act to divorce evangelization from works of charity neuters the Church and relegates charity to mere philanthropy. Catholic Relief Services, by their own admission, is content to feed bodies and starve souls.”

Paul Eagle, CRS’ communications director, suggested that O'Keefe's statement was misunderstood, telling LifeSiteNews that their work is a clear example of not proselytizing, but preaching the Gospel through works.

“We are indeed proud that we witness the Church’s mission and the call of the Gospel to care for those in need, regardless of who they are or what they believe, through the work that CRS does every day,” he said. “This is a central part of the Church’s evangelizing mission, but it does not include proselytizing or requiring that people become Catholic to receive our assistance.”

Eagle told LifeSiteNews that CRS follows St. Francis of Assisi, who has been reflected in the leadership of Pope Francis. He pointed to a famous quotation that is often attributed to St. Francis, which goes, “Preach the Gospel at all times. When necessary, use words.”

“Our work is a clear example of not proselytizing, but preaching the Gospel through what we do,” Eagle said.

Eagle directed LifeSiteNews to a CRS web page which states that CRS “rejoices in” the encyclical Caritas in Veritate, and has grown in a deeper understanding of its mission through study and reflection on Benedict’s earlier encyclicals Deus Caritas Est and Spe Salvi.

But Father Boquet said a policy banning discussions of faith or preaching the Gospel is clearly opposed to Catholic teaching on charity.

“This is a radical departure from how the Church has always understood her essential charitable and missionary work,” he said.

He quoted Pope Francis in his first homily as pope: “We can walk as much as we want, we can build many things, but if we do not profess Jesus Christ, things go wrong. We may become a charitable NGO, but not the Church, the Bride of the Lord,” the pope said.

Pope Francis has repeated this theme several times, most recently in June of this year, said Father Boquet. At that time, “he said that the Church cannot just be a ‘well organized NGO,’ or just some institution with people who are ‘fans’ of being Catholic.”

Boquet and the other pro-life critics pointed out that several recent popes have written at length on the need for evangelization to remain at the heart of its charitable work.

“This is a radical departure from how the Church has always understood her essential charitable and missionary work.”

In Evangelii Nuntiandi Pope Paul VI wrote that generous Christians are often tempted to reduce the Church’s mission to the realm of the temporal, downgrading it to be man-centered. The Holy Father said in that document that this reduction to a focus on material well-being would mean the Church would lose her fundamental meaning.

Pope Benedict XVI echoed this teaching in Deus Caritas Est, stating, “The entire activity of the Church is an expression of a love that seeks the integral good of man: it seeks his evangelization through Word and Sacrament.”

In Caritas in Veritate, Pope Benedict cited Pope Paul VI, writing that Christian charity is “part and parcel of evangelization,” because, “Jesus Christ, who loves us, is concerned with the whole person.”

Many CRS employees not Catholic

Mosher also highlighted Pope Benedict’s motu proprio titled ‘On the Service of Charity,’ which he said “is quite clear in that the work of Catholic charities should be grounded in the Mass and the Sacraments, which implies evangelization.”

The CNN Belief Blog article also reported that CRS “doesn't even like” to be labeled missionary because of the word's association with evangelizing, stating:

Though Catholic Relief Services says it is motivated by the Gospel to embody Catholic social and moral teaching, it does not preach to the people it helps.

In fact, you don't even have to be Catholic to work for Catholic Relief Services. Among its 4,500 workers are many Muslims, Hindus and members of other religions, said Bill O’Keefe, the organization’s vice president of advocacy.

Eagle told LifeSiteNews CRS is proud as a Catholic agency that it works collaboratively with all people regardless of faith, which is especially important in communities where the majority of people are not Catholic.

He added that CRS takes steps to ensure Catholic identity in preparing employees for work with CRS, referencing a tutorial, “Protecting Life,” which was reviewed by the USCCB.

At the same time, experience has shown that what CRS cannot account for is the personal opinions of its non-Catholic employees, which, according to Mosher, inevitably affect the way they perform their jobs. A May 2014 LifeSiteNews article reported on public campaign records showing that since 1990 CRS employees have donated tens of thousands of dollars, 98.1 percent of their political donations, to elect pro-abortion politicians to office.

LifeSiteNews has also reported on the fact that numerous CRS employees in key policy positions have in previous jobs advocated for activities that violate Church teaching.

For example, Daphyne Williams, who has worked for CRS since 2008 and helped to develop a controversial policy whereby CRS would provide “complete and accurate” information on condoms, was hired after working at a series of pro-abortion organizations. One, which she listed on her LinkedIn page until LifeSiteNews reported on it in 2012, was called Pro-Choice Resources.

In another more dramatic case, a CRS employee was charged and convicted after deliberately ramming her car into a crowd of pro-life activists at the March for Life.

“As far as the claim that they somehow ‘evangelize’ by not preaching the Gospel, by not hiring Catholics … this simply makes no sense,” Mosher told LifeSiteNews.

“They say that ‘they help people because they're Catholic.’ But CRS employees, including very senior employees, are often – as the organization itself proudly admits – not Catholic at all,” said Mosher. “So it is hard to take this defense seriously.”

Mosher said that statements indicating CRS is proud that is does not evangelize raise the question of whether CRS's donors are being defrauded by an organization that claims to be “Catholic,” but distances itself from the Church in its actual programs and practices.

“If Catholic Relief Services is not going to hire practicing Catholics, work through the local Catholic Church around the world, and preferentially serve Catholic populations,” Mosher said, “then it has no business calling itself ‘Catholic.’ For it is not. It is just another humanitarian NGO which can make no special claim on Catholics.”