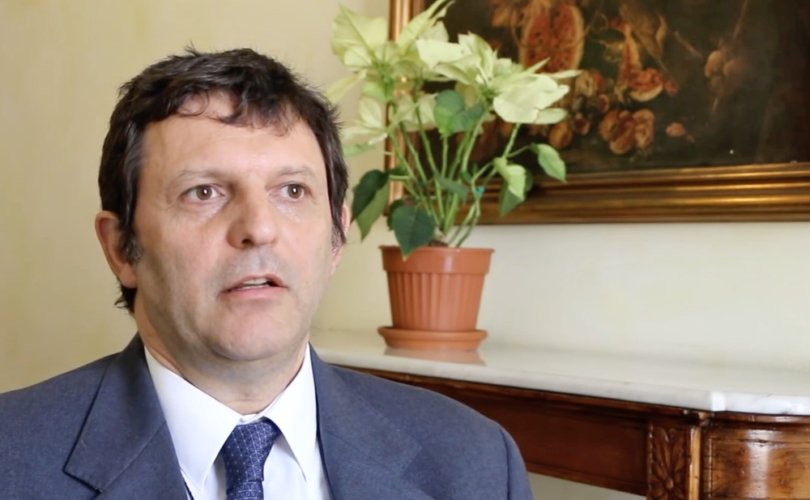 ROME, May 2, 2017 (LifeSiteNews) – What is “implied” in the whole discourse of Pope Francis' Exhortation Amoris Laetitia is “very clear and really runs against very important dogmatic articles of the faith,” said a professor of Patristics and medieval philosophy in an interview.

Professor Claudio Pierantoni of the University of Chile made the comment to Edward Pentin of the National Catholic Register in an April 22 interview. Pierantoni spoke at a conference in Rome that same day on the need to clarify the confusion caused by the Pope's controversial Apostolic Exhortation.

It's “not quite the case” that Amoris Laetitia can be interpreted in an orthodox way, Pierantoni said in the interview.

“The document is indirect. It says things in an indirect way, but clearly, so the reader gets very clearly the message…What is implied in the whole discourse is very clear and really runs against very important dogmatic articles of the faith,” he said.

The Professor called it “unjust” to say that bishops are misinterpreting the Exhortation's 8th chapter when they issue guidelines that allow divorced and civilly remarried Catholics to receive Holy Communion.

“It makes much more sense that they are really getting the real meaning of the text and this is counter-proved by the fact that the Pope himself approves of their guidelines,” he said.

Pope Francis has given his approval to guidelines of the bishops of Buenos Aires, which allow Communion for the divorced and remarried. He also thanked the bishops of Malta, according to a Maltese news outlet, for their guidelines that allow people living in objectively sinful situations to receive Communion if they feel “at peace with God.”

Pierantoni called the current crisis in the Church “unprecedented” and “apocalyptic.” He said that never before has “doctrinal confusion been published in a pontifical document.” While Pope Francis hasn't openly made explicit heretical statements, he said, his words and actions, however, “go in that direction.”

The Professor emphasized the importance of not only speaking the truth, but of correcting errors.

Those who are “content to follow orthodoxy [without] saying that an error is being taught” are doing “only half of the duty” that is required of faithful Christians, he said. Bishops who preach orthodoxy while ignoring the existence of error are actually feeding relativism, he added.

This means it's “probable” that a correction of Amoris Laetitia will be issued, he said, and it could be from Pope Francis' successor, or from cardinals.

It's a “duty of charity” to correct Pope Francis and not take a morally relativistic approach to the controversy, said Pierantoni.