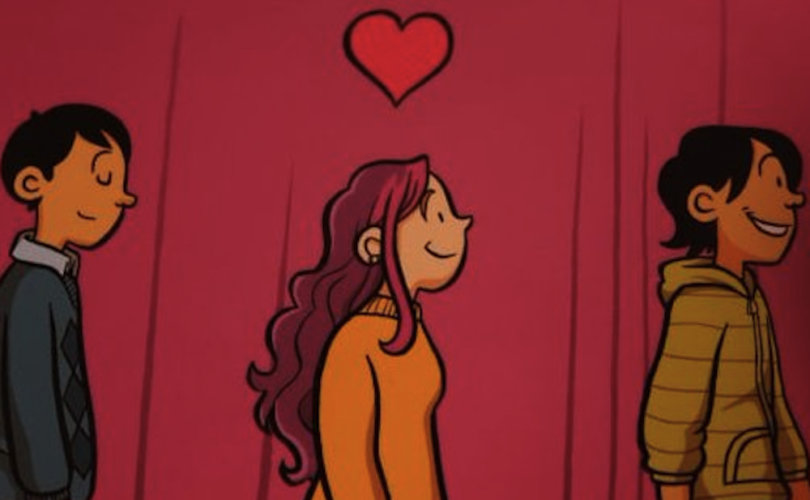 Created by American author/illustrator Raina Telgemeier, the 2012 book released by Scholastic is about a girl who tries out for her middle-school stage production. A side story in the graphic novel delves into same-sex attraction and features two boys kissing each other onstage, one of whom is dressed in drag.

Yes, DRAMA got banned in Ottawa’s Catholic elementary schools. And all this time we thought Canada was our most progressive sibling!

I’m sad for the kids who need this book but can’t access it.

A request for comment from the Catholic Archdiocese of Ottawa went unanswered.

I’m overjoyed: the Ottawa Catholic School Board reversed the decision to remove DRAMA from their elementary libraries.

All kids deserve representation, validation, and visibility in media at every age. THANK YOU to everyone who spoke out!

After an outcry from local politicians, parents, and the author, the school board changed course and decided to allow the book for reading by young children at the publicly funded Catholic schools. In an email to CBC, Ottawa Catholic School Board spokeswoman Mardi de Kemp wrote that the board “listened to educators, parents, stakeholders and ratepayers” in making the decision. She averred that the school system remains “committed to having safe, inclusive, and accepting schools.”

Lyra Evans, who has been identified in the press as a “transgender woman” who sits on the Ottawa-Carleton District School Board, expressed satisfaction with having “Drama” at Catholic schools. She tweeted earlier Monday, “Kids should grow up seeing LGBTQ relationships as normal, and not devious or wrong. Pulling this book out of Catholic elementary schools gives precisely the wrong impression.”

Kids should grow up seeing LGBTQ relationships as normal, and not devious or wrong. Pulling this book out of Catholic elementary schools gives precisely the wrong impression. https://t.co/T3OwcK6wvJ

According to the Catechism of the Catholic Church, “Basing itself on Sacred Scripture, which presents homosexual acts as acts of grave depravity, tradition has always declared that ‘homosexual acts are intrinsically disordered.’ They are contrary to the natural law. They close the sexual act to the gift of life.”

“They do not proceed from a genuine affective and sexual complementarity. Under no circumstances can they be approved,” adds the Catechism.