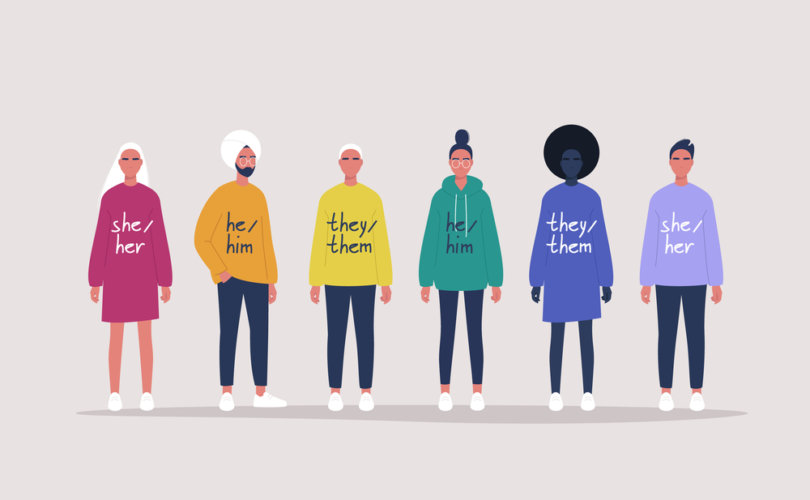 (LifeSiteNews) — The York Catholic District School Board (YCDSB) in Ontario has told staff members to include their “pronouns” in their official emails in an apparent acceptance of gender ideology.

In a screenshot of an internal memo obtained by LifeSiteNews, the YCDSB can be seen explaining that as part of the “Accessibility Pillar Equity strategies” starting in the “2020-2021 school year,” all staff were instructed to begin “adding [their] pronoun ie. she/her, he/him” to the signature displayed on emails.

The inclusion of “pronouns,” often referred to as a person’s “preferred pronouns,” is an integral part of the transgender and “LGBTQ” agenda. The idea behind the addition of pronouns to one’s signature, which can range from “he/him,” “she/her,” “they/them,” or a number of other invented words, is to presuppose the radical concept that a person’s “gender identity” may differ from their sex, and therefore one needs to state which pronouns they want used in reference to them.

For pronouns such as “they/them,” there is the underlying implication that the person chooses to not have a gender, often referred to by the LGBTQ crowd as being “non-binary” or even “genderless.”

While the secular world has been quick to adopt such practices, which have their roots in extreme left-wing ideologies, Catholic schools and institutions are also joining in on the pro-LGBT trend, causing division not only in society, but within the Church as well.

“Under no circumstances should a Catholic school system, which is an arm of the Catholic Church, be using noun protocols that are designed to legitimize and spread transgender ideology. It’s a pernicious strategy to trap every man, woman and child in the tentacles of this evil transhumanist ideology. By a vehicle as simple as a new policy, ideologues will achieve the goal of having every teacher and staff member affix to their name a sort of ‘attestation of belief’ in transhumanist-transgender ideology,” Campaign Life Coalition Director of Political Operations Jack Fonseca wrote to LifeSiteNews, explaining the implications of the YCDSB’s policy.

“The use of transgender noun protocols represents a rejection of Catholic anthropology of the human person which holds — and must be believed by the faithful — that God made us male or female. This Christian anthropology rejects the idea that a biological male might actually be a ‘woman’ if he ‘feels trapped in the wrong body.’ It thereby invalidates the possibility of a Catholic being able to sign his or her name with transgender pronouns. Make no mistake, every teacher, staff member, or trustee who complies with this memo is committing a sin. This policy memo must be retracted immediately. Those who issued the policy should be asked to resign from the Board of Trustees,” added Fonesca.

The YCDSB, located in York Region, a suburban section north of Toronto in southern Ontario, is under the purview of the archbishop of Toronto, Cardinal Thomas Collins.

Collins has previously come under fire by faithful Catholics for his imposition of a vaccine and testing mandate for priests, deacons, and volunteers in the archdiocese during the COVID crisis, but did uphold Church teaching last summer by advising the Toronto Catholic District School Board against flying a rainbow flag in celebration of gay “pride month.”

“Cardinal Collins is the God-ordained Sheppard responsible for ensuring and maintaining authentic Catholicity in the York Catholic School Board. Was he made aware of this new anti-Catholic policy of diabolical disorientation?” wondered Fonseca in his statement to LifeSiteNews. “If so, what is he doing to stop the madness and to prevent the further spiritual corruption of the children who will ultimately get sucked into this transhuman indoctrination? If His Eminence did not know of this development, once this story is published by LifeSiteNews, he must take action.”

LifeSiteNews has reached out to the Archdiocese of Toronto for comment but has not yet received a response.