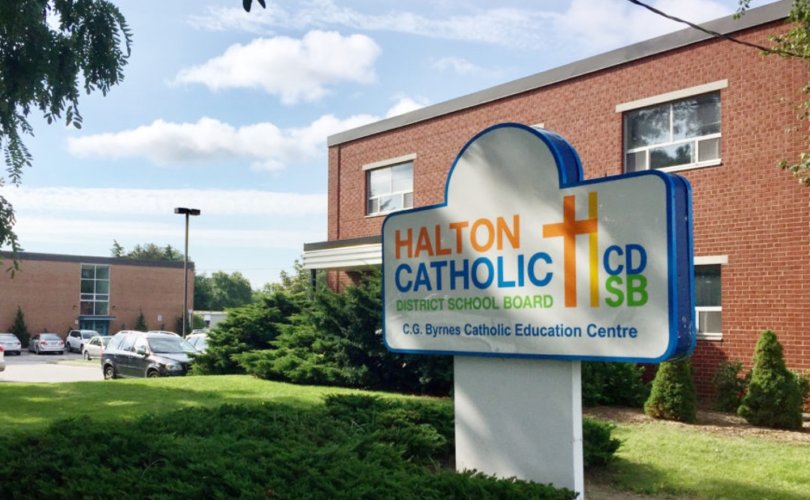 BURLINGTON, Ontario, October 24, 2018 (LifeSiteNews) – A Catholic school board that oversees schools west of Toronto is now under the control of trustees who were backed in Monday's election by a Catholic teachers' union that successfully pressured the board to overturn a pro-life policy earlier this month.

On Monday, six of the nine people elected to the Halton Catholic District School Board (HCDSB), a school board that bills itself as “distinctively Catholic,” were candidates backed by the Ontario English Catholic Teachers' Association (OECTA).

In January, that union sent a letter to the board asking it to scrap its Sanctity of Life policy which banned school-generated funds from going to charities directly or indirectly supporting abortion, euthanasia, sterilization, contraception or embryonic stem cell research, similar to policies in other Catholic boards. The board held public consultations and eventually withdrew that pro-life policy.

Jack Fonseca, a spokesman for Campaign Life Coalition, says the result of Monday's election is to effectively gut the school board's pro-life representation.

“The pro-life presence of the trustees has been greatly diminished by this electoral result,” said Fonseca in an interview. “The board went from four reliably pro-life votes out of nine to just two.

“That means the OECTA-endorsed candidates have control of the board – and that's not good given that OECTA opposed the Sanctity of Life motion, marches in the homosexual pride parade each year, and has undertaken other activities that have the effect of undermining Catholic moral teaching,” he said. “I fear Halton may now go from being the most Catholic board in the country to the least, and that homosexual-activism will be a constant feature.”

Only two of them, O'Brien and Karabela, the author of the Sanctity of Life policy, got in.

Catholic lawyer Geoff Cauchi voted in this school board election. He's disappointed by the results and discouraged by what he sees as the erosion of the Catholicity of schools in the region.

“The Halton Catholic District School Board election shows how OECTA influences the election results of a particular board, in circumstances where they are also on the other side of the bargaining table,” he said. “With low turnouts, that influence is disproportionate.”

Catholic denominational schools are a treasure Cauchi says is worth saving.

“It is our legacy,” he said in an interview. “Our ancestors left it to us. We're on the cusp of destroying what they created. I would say that most Catholics schools are now Catholic in name only.”

“The secularization of Catholic schools has been a long time coming but I think it's at a point now where it's too late to reverse it,” he added.

Although it is not expressly forbidden in the Labour Relations Act, Cauchi thinks a legal case could be made that the jurisdiction of unions in Ontario does not allow them to stack the boards of their Catholic employers by politicking during elections.

“OECTA is not a religious organization, and there is clear judicial authority the (Labour Relations Act) should not be interpreted in a way that would authorize a union to engage in conduct that prejudicially affects the denominational rights of Catholic electors,” he said.

With the election now over, the only recourse pro-life Catholic school board electors in the region have is to keep a watchful eye on the board's affairs and complain if there are conflicts of interest by OECTA-backed trustees, the lawyer suggested.

“Will it be a situation where the union-backed trustee will vote the way the unions want them to vote? Will they admit to a conflict of interest?” he said.

“If there was a groundswell movement to change things, I would probably join it but I would not lead it,” said Cauchi.

To date, he says, a substantial obstacle to change is the reluctance of teachers who privately complain about the union’s efforts to undermine the Catholicity of the schools, to come forward and publicly witness to this activity. They seem to be “deathly afraid of retribution” from either the union or the Board itself for appearing to  be ‘too Catholic’.”

Despite the gloomy outlook for Halton, Fonseca expressed some hope that the pro-life Trustee, Helena Karabela who authored the short-lived Sanctity of Life policy, along with new Trustee, Tim O’Brien, can still have some success in defending and advancing the right to life.

“Halton schools still say the word Catholic above the door frame, so hopefully the new trustees, and even the OECTA-backed ones, can be persuaded to go along with some policies that respect the Catholic Church’s essential pro-life values”, said Fonseca.

Indeed, Karabela issued a statement on election night following the publication of results, in which she vowed to continue fighting for the right to life.

“I am grateful to the Catholic voters of Oakville for choosing me to continue to be their trustee….I am so grateful to have had the opportunity to increase Holocaust Awareness in the Halton Catholic Board, as well as to increase awareness about the sanctity of life, from conception to natural death,” she said.

“Today is the day all Catholics and people of good will remember the great life of Pope St. John Paul II who said that the Right to Life was the most fundamental of all human rights. With my new mandate in this election, I look forward to working with the community to do more to advocate for the unborn, those threatened by euthanasia, and against all other attacks on the dignity of human life,” she added.