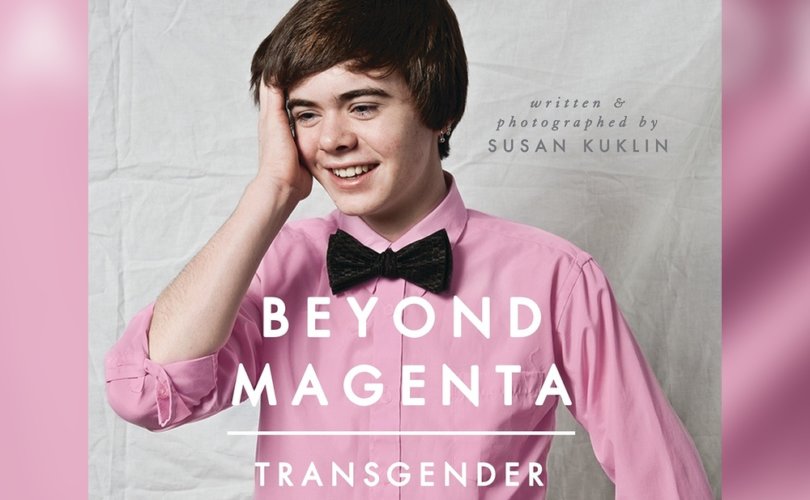 Book cover of 'Beyond Magenta: Transgender Teens Speak Out'

WARNING: This report contains disturbing content of a sexual nature.

OTTAWA, December 5, 2019 (LifeSiteNews) — A Catholic school board in Ontario allows children to access in its library a sexually explicit pro-transgender book that includes an author’s description of how he stimulated sexual organs of “guys in my neighborhood” with his mouth as a six-year-old boy.

Beyond Magenta: Transgender Teens Speak Out (2014) by Susan Kuklik is on the shelf at the Ottawa Catholic School Board’s (OCSB) Mother Teresa and St. Joseph’s high schools, and is available electronically to all secondary school students.

And because fourteen of OCSB’s 15 high schools include Grades 7 and 8, that means students as young as 12 can access the book that positively recounts six teens “transitioning.”

Beyond Magenta is described on the OCSB library data base as a “2015 Stonewall Honor Book” and a “groundbreaking work of LGBT literature [that] takes an honest look at the life, love, and struggles of transgender teens.”

But that’s not how Canadian Catholic Intelligence blog, which raised the alarm that book is available in the OCSB as an electronic resource, describes Beyond Magenta.

The CIA blog references a press release from Binary Australia, which denounced the book in August as “disturbing” and “unfit for children.”

An advocacy group that affirms “gender is binary” and “exists to challenge the aggressive agenda to de-gender our society,” Binary Australia blasted local libraries in Australia for promoting the book in the youth section.

Beyond Magenta “contains explicit language, violent acts, and graphic descriptions of oral sex carried out by children as young as six-years-old. Written mostly in first-person, transgender people share their journeys without mentioning the illegal nature of their activities or the consequences of certain behaviours,” it noted in a press release.

The release included excerpts from the book:

From six up, I used to kiss other guys in my neighborhood, make out with them, and perform oral sex on them. I liked it. I used to love oral. And I touched their you-know-whats. We were really young but that’s what we did.

“Descriptions of violent behaviour include pushing over a pregnant teacher. The author writes, ‘I know it was wrong but….’ – as if their anger were a justification for their actions,” it noted.

“These stories are being promoted to young people who may not have the capacity to judge whether this is good or bad behaviour. And despite the illicit nature of their accounts, each concludes by celebrating their transition,” Binary spokesperson Kirralie Smith said in the release.

“Such material has no place in tax-payer funded libraries and should certainly never be promoted to children.”

That’s echoed on the CIA blog.

“Should taxpayers pay for books like this at the OCSB?” it questions.

“Why are these books in schools? Is it to normalize pedophilia? Is it to help groom kids for pedophilic teachers?”

That question caught the attention of National Post columnist Barbara Kay, who tweeted it out Wednesday with the comment: “This is our culture now.”

This is our culture now: Why did #OCSB buy a book with a 6yo positively describing himself performing oral sex? #ocsb #ottnews #onted #onpoli https://t.co/EvfMrYPmeO

LifeSiteNews contacted OCSB communications manager Sharlene Hunter for comment, but did not hear back by deadline.