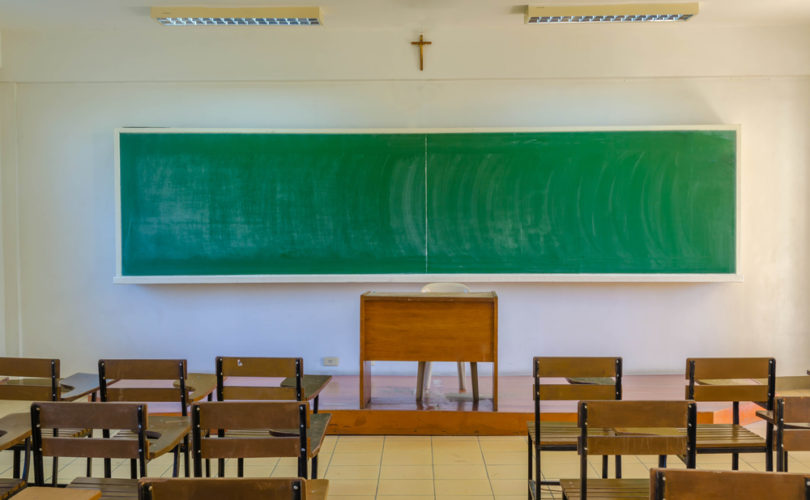 BURLINGTON, March 9, 2018 (LifeSiteNews) – A Catholic school board in Ontario is under fire for passing a motion that bans school-generated funds from going to pro-abortion charities.

Students have launched a petition against Halton Catholic District School Board’s motion, claiming it prevents them from donating to charities such as Me to We, Sick Kids, Canadian Cancer Society that have “done wonders” in the community. It’s been signed by 19,500 to date (5,500 in Canada).

And a handful of parents have alleged in letters to the board that the motion should be repealed because trustees are obliged to consult school councils when it comes to fundraising.

“It is time to consult the community with which you serve,” parent Pamela Walls wrote in an open letter to trustees. “This vote did not reflect my voice. In spite of good intentions, I believe your motion to limit charitable donations was short sighted and done in haste.”

The sanctity of life motion ensures the Catholic board will not donate “to any charities or non-profits that publicly support, either directly or indirectly, abortion, contraception, sterilization, euthanasia, or embryonic stem cell research.”

The motion passed January 16, provoking objections from the Ontario English Catholic Teachers Association (OECTA) and some parents. The board reconsidered the motion at its February 20 meeting and after an initial defeat, it passed again by a vote of five to three.

Board chair Diane Rabenda defended the policy in the midst of the ongoing controversy, but also signaled the board is open to change.

“That was the resolution of the majority of the trustees and so we’re implementing that resolution,”  she told Matt Galloway on CBC’s Metro Morning Monday.

“Now, can it change? Of course, it can change.… at the moment, we have to support it because it's a resolution of the board.”

The board has asked students to speak to the matter at the March 20 board meeting, Rabenda said.

“At this particular point in time, we are welcoming, well, basically conversations, and also delegations from the board,” she said. “We are hoping that many of our students will come forward and talk to us.”

Galloway quoted a letter OECTA representative Keith Boyd sent the board that accuses trustees of being “unnecessarily divisive” and taking “a narrow view of Catholic values” by passing the motion.

The CBC interviewer asked Rabenda to comment. She responded: “I think they’ve followed the tenets of the faith to the letter. Today it’s a very different society than what it was many years ago, of course, but nevertheless the faith remains the same,” Rabenda said.

“It has caused division, there is absolutely no question about that,” she said. “And certainly with our student trustees, they asked for more time, and unfortunately that was not given.”

Ben Sabourin, student council president at Christ the King Catholic School, told Galloway he was “shocked” by the motion.

The “same board” that has been “calling upon us since senior kindergarten to act for those in need” is “now telling us that we cannot support various charities that could include SickKids Hospital and the Canadian Cancer Society,” Sabourin said.

“They’re not entitled to scandalize others, Catholics who are trying to support life,” said Cauchi, who is an elector in the Halton Catholic board.

“There are many, many, many other charities in the world that do equally good work in the same fields that they could make a good gift to,” he told LifeSiteNews. “They could always be found. There’s no need to give to pro-abortion or pro-contraceptive organizations.”

The students “should also understand that the trustees owe fiduciary duties to the Catholic electors on issues of Catholicity,” he said. “They don’t owe their duty to dissenting students or dissenting teachers.”

The Halton Catholic school district raises about $12 million annually in school-generated funds. These have gone in the past to 100 charities and non-profits, according to a list provided to the board at the February 20 meeting.

The board’s director of education Paula Dawson sent a communique to parents March 5 explaining the “intent of the motion” and that the board was in the process of “determining which charitable organizations may continue to receive donations.”

However, a cursory look reveals at least three charities disqualified under the motion: Canadian Cancer Society engages in embryonic stem cell research, Doctors Without Borders provides and lobbies for abortion, and Plan International Canada lobbies for sexual and reproductive health and rights for girls, language that critics say means contraception and abortion.

Cauchi faulted OECTA for inflaming divisions within the board, and Rabenda for undermining the motion by allowing students to come speak to it.

“Most organizations have a policy that once a resolution has passed, all directors — in this case, all Trustees — must support the resolution, and if they can’t, they should resign,” he said.