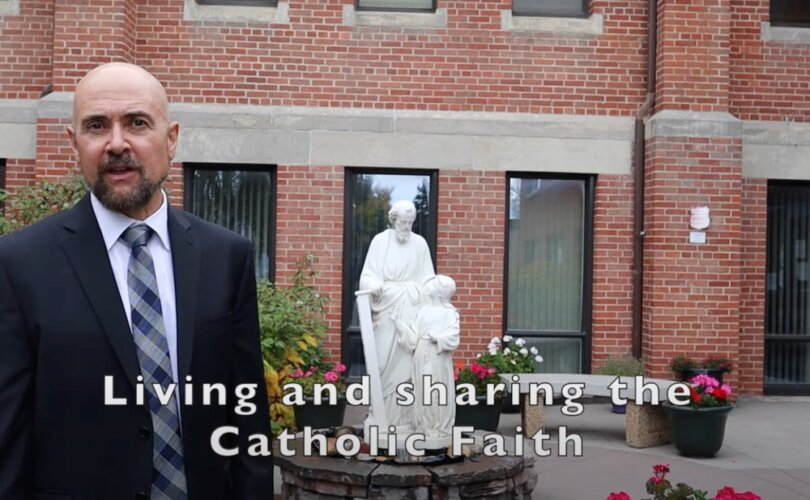 Dan Penna in an ad from his campaign for trustee. polity.vote/dan-penna/ screenshot

CALGARY (LifeSiteNews) — Calgary Catholic School District (CCSD) is not a safe space to be Catholic, said a substitute teacher fired for explaining the catechism to students. Dan Penna, disturbed by what he observed as a substitute teacher, ran for Catholic trustee in Calgary and was terminated as an employee immediately after the campaign ended in October 2021.

A year later, Penna met in person with Chief Superintendent Bryan Szumlas and Calgary Bishop William McGrattan, but no corrective action has been taken.

“Catholic parents need to know that their children’s faith is being undermined by the stark hypocrisy of CCSD,” said Penna, “and it starts at the top with (Chief Superintendent) Szumlas.”

“He ended the meeting thanking me for sharing ‘my truth’ which may not be in harmony with ‘his truth’ but he left out The Truth, Jesus Christ,” Penna told LifeSiteNews.

CCSD’s public website states that, “Even though there is continuous pressure in society to separate the secular and the religious (Church and State), as Catholics we are called by baptism to live our faith every moment of every day,” whereas in Szumlas’s correspondence to Penna confirming Penna’s termination (see full PDF HERE), the Chief Superintendent instructed him, “You are not called upon to evangelize our students.”

“It is simply indefensible to ask a Catholic teacher in a Catholic school to not evangelize students,” said Penna. “Frankly, ‘the mouth speaks what the heart is full of,’ and we need a change in leadership. It is scandalous to have a faith leader being paid $250,000 per year to pay lip service to the faith while telling Catholic teachers to ignore Christ’s Great Commission” to baptize all nations.

“I was told in writing that my behavior violated the Alberta Teaching Quality Standard to act with respect, empathy and care for students, but I believe that teaching Catholic students the Catholic faith is respectful and caring for students and their eternal souls,” he said. “The logic of my dismissal is that it is unprofessional and even illegal for me to uphold with clarity the teachings of the Catholic Church.”

‘The school system is failing by the only metric that counts’

Penna has written to urge the bishop to act on his authority to appoint specialized instructors to teach the Catholic faith.

“Szumlas admits in writing that the majority of teachers have a ‘young’ faith and apparently do not regularly attend Sunday Mass, but the spiritually blind are not suited to awaken the love of Jesus in the hearts of students,” said Penna. “The school system is failing by the only metric that counts: how many graduates are in love with Christ and want to follow His commandments and serve His Church? Parents and lay Catholics must wake up, speak up, and get involved.”

“The District adheres to the principle that our Catholic faith is integrated into every program and every aspect of school life; this is called permeation,” states the Permeation of Catholicity policy. Meanwhile, Szumlas told Penna, “do not actively embed Catholic faith principles into the lesson plan of the classroom teacher, unless they are provided in detail in the lesson plan – leave that responsibility to the classroom teacher” (emphasis in original).

The public policy states that, “The District expects that all teachers will support parents/legal guardians as primary educators by presenting with clarity the teachings of the Catholic Church when addressing any sensitive issues.”

Meanwhile, Szumlas directed Penna, “do not engage with them [students] on these [sensitive] issues.”

“I was twice censured for following the official policy instead of the unwritten policy, and then they brought in a mandatory sensitive issues training course for substitute teachers that seemed tailored to address my specific circumstances,” said Penna. “When I pointed out that they had formal and informal policies that contradicted one another, they fired me.”

In one instance, a high school principal spent five minutes during morning announcements to extoll the virtues of a Canadian pro-LGBT activist, which prompted Penna to tell the class that “our primary identity as Catholics is as children of God,” and that pride is a sin if we imagine that “we know better than God what is right and wrong.” (The Catholic Church also teaches that pride is one of the seven deadly sins.)

Soon afterwards, a Grade 7 student declared herself bisexual to him in front of the class and asked if what Penna had said made her “wrong.”

“I am aware of cancel culture, so I chose my words carefully,” explained Penna. “I told her that she herself was not wrong, but Catholic tradition has always taught that sexual expression is reserved for marriage between a man and a woman.”

When the students complained, Penna said, he was promptly asked to leave the school by the principal.

“Please understand that: (1) there is a wide umbrella of Catholicism within our staff and student population; (2) the majority of our staff and students have a ‘young’ faith, which requires a more sensitive pastoral approach and not a challenging and combative approach that leads to polarization and disillusionment with our faith; (3) you are subject to the direction of your school principal and other supervisors, based upon the direction received from Dr. Szumlas and human rights legislation as interpreted by the courts,” Penna was admonished. “Please be aware that Dr. Szumlas has provided over the course of the last year the direction to be more accepting of those who are from a diverse background.”

“Then they contradicted St. Paul’s injunction to not conform to the world and told me that they, ‘must be careful to abide by… ever changing social directions in harmony with our faith,’” said Penna.

Penna told LifeSiteNews that as a substitute teacher in various staff rooms, he heard teachers laughing about not attending church in years and declaring that they think it is okay for elementary students to be “gender-fluid.”

An entire Grade 6 class did not know the words to the “Glory Be” prayer, and the teacher asked him if the Our Father came before or after the 10 Hail Marys in the Rosary, he recalled.

Meanwhile, there were pro-transgender posters on high school walls and Penna said he heard high school students urged in morning announcements to come forward with stories of “microaggressions” that they experienced at school.

During his campaign for trustee, one teacher contacted Penna anonymously and told him that his school was exactly the way that Penna described it.

“He said he felt like he was the only sincere Catholic on staff and that he had to watch his back constantly for fear of being cancelled himself,” said Penna.

“Szumlas in his internal email correspondence with all staff has wished everyone Happy Pride repeatedly,” said Penna. “Szumlas said, ‘of course we support BLM,’ seemingly unaware that BLM’s founders pride themselves as trained Marxists seeking the overthrow of the nuclear family.  He has written that CCSD is systemically racist and set up a racial justice committee.”

Penna, like all CCSD teachers, was mandated to take a course called, “Building Culturally Responsive Communities,” which he described as, “coming from a Critical Race Theory mindset.”

There are no Christian images in the online module, but there are images of other religions, said Penna. He said the training emphasizes that, “culture doesn’t have a ‘norm,’” and goes on to tell teachers to, “Embed and celebrate students’ cultural identity in every aspect of your school.”

In a Catholic context, this makes no sense, said Penna, since Catholic culture does have norms established by God to unite believers, and permeating that cultural identity is the legitimate task of the school and the promise made to parents.

Many Catholics know that the school system is failing to inculcate the Catholic faith, said Penna, but too many lack the courage to pay the price of being Christ’s disciple.

“I was not willing to scandalize the children in front of me in the classroom,” Penna said. “When they asked legitimate questions, I told them what the Bible says and what the Catechism says, because I didn’t want a millstone around my neck. I urge Catholics to stand with me, for the sake of our children and for the sake of Christ.”

When LifeSite asked if it is the position of the Calgary Catholic School District that substitute teachers should not actively embed principles of the Catholic faith into lesson plans and that substitute teachers are not called to evangelize students, Communications Specialist Manique Werapitiya-Galle responded, “The Calgary Catholic School District (CCSD) expects its guest teachers to demonstrate the academic and professional competencies necessary to work cooperatively with each school, providing instruction of students and ensuring they received an uninterrupted, high quality of instruction.”