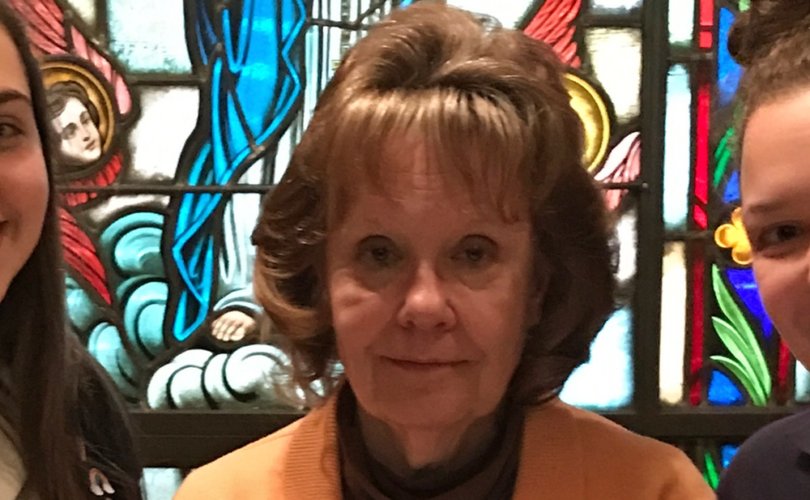 Joan Simon, a veteran Catholic school religion teacher with more than forty years of experience was informed October 9 — on her first day back to work from disability — that she had to either resign or be fired for disseminating the letter, apparently because administration at St. Dominic Academy in Jersey City, New Jersey, found it to be at odds with their beliefs.

The article, titled, Dear Troubled Catholics, penned by Martin eloquently and powerfully expresses the disturbed shock of many at the grave, mostly homosexual scandals rocking the Church right now. At one point, Martin writes:

And how long can Church officials speak about the “positive values” of “irregular relationships” until the average Catholic comes to believe that we no longer believe the words of Jesus that fornicators, adulterers, and those who actively practice homosexuality will not enter the kingdom of God unless they repent? How many still believe that there is really a hell and that, unless we repent from such serious sins before we die, we will go there? Have we ever heard from leading churchmen, even in Rome, in recent years, that adultery, fornication and homosexual relations are not only “irregular,” but gravely sinful?

Simon was stunned to be told that the letter was cause for her dismissal.  The school’s administrators insisted that, according to Simon, the letter was “not the Catholic Church’s teaching.”

“The head of the school, Sarah Degnan Moje, said she refused to believe that [Martin’s article] was Catholic and then said the school’s philosophy is ‘first Dominican and then Catholic,’” Simon told LifeSiteNews in an exclusive interview.

Simon said that when she countered that such a position cannot be true for a Catholic institution, Degnan Moje told her, “As long as I’m head of the school, this article is unacceptable.  This meeting is over.”

It remains unclear what in the letter the school's administration objected to. Simon said that there is far more at stake here than her teaching job. This is about “the Church,” she told LifeSiteNews.  It’s about “The Truth.”

Simon is looking into her legal options.

The embattled school teacher offered several examples of troubling practices at the school that appear to be contrary to Church teaching.  Three years ago, Simon was forbidden by the Dean of Students to use the term “Father” when speaking of God.  Instead, she was told that in-class prayers should be addressed to the “Creator” because “Father” is “too masculine” and God shouldn’t be portrayed that way.

Simon’s efforts to make available the Sacrament of Reconciliation for her students have been hindered by the school.  She was also prohibited from presenting authentic Church teaching about homosexuality in her religion classes, and was instead told to be “tolerant.”

“What’s the point of having religion class?” wondered Simon.

LifeSiteNews reached out to Degnan Moje, as well as Academic Dean, Mrs. M. Guendolyn Farrales, and Dean of Students, Sr. Mary Lou Bauman, in order to understand what exactly in the Martin article triggered Ms. Simon’s firing, but none have replied.

Catholic evangelization group Renewal Ministries, where Dr. Martin is president, told LifeSiteNews that Martin’s letter contains nothing contrary to Catholic doctrine and that it appears that Simon has been treated “unjustly.”

“We’ve looked into this situation at Renewal Ministries and, without being directly involved, it seems to us that Joan Simon has been treated unjustly,” said spokesperson Jack Lynch.

“There is nothing in the letter that Dr. Ralph Martin sent out at the end of July following the revelations about former Cardinal McCarrick that is contrary to Catholic doctrine – quite the contrary,” continued Lynch. “We feel it is appropriately hard-hitting given the gravity of the subject, while being well-balanced in tone and content.”

Dr. Ralph Martin’s credentials and reputation are above reproach. He holds a doctorate in theology from the Pontifical University of St. Thomas (Angelicum) in Rome and is a professor and the director of Graduate Theology Programs in the New Evangelization at Sacred Heart Major Seminary in the Archdiocese of Detroit.

Martin was named by Pope Benedict XVI as a Consultor to the Pontifical Council for the New Evangelization and was also appointed as a “peritus” to the Synod on the New Evangelization. He is the author of a number of books, the most recent of which are The Urgency of the New Evangelization, The Fulfillment of All Desire, and Will Many Be Saved? He hosts The Choices We Face, a widely viewed weekly Catholic television and radio program distributed throughout the world. He and his wife Anne have six children and sixteen grandchildren and reside in Ann Arbor, Michigan.