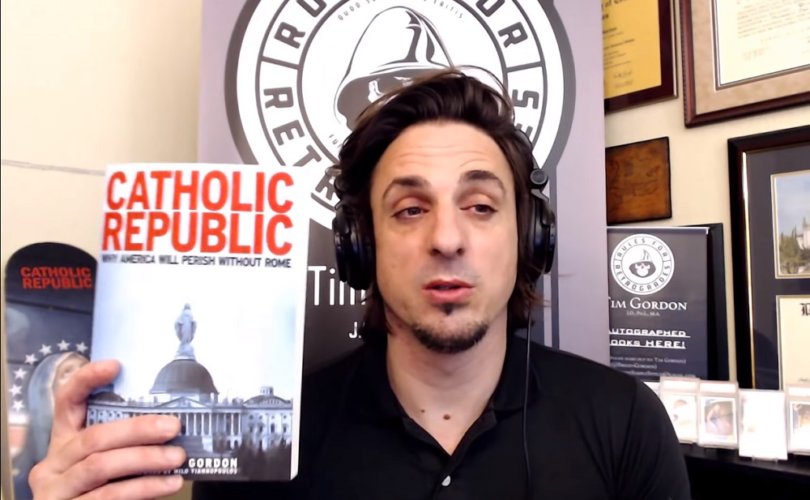 BAKERSFIELD, California, June 8, 2020 (LifeSiteNews) ― A Catholic teacher was dismissed from his position at a California Catholic school after criticizing the Black Lives Matter organization on Twitter.

On June 3, Gordon tweeted, “BLM is a terrorist organization.” In a separate tweet, he expressed amusement at a tweet from NPR stating that public health authorities had signed a letter saying, “White supremacy is a lethal public health issue that predates and contributes to COVID-19.” Gordon also called for the government to quell the street violence raging across the United States in response to the death of George Floyd in Minneapolis.

In response to Gordon’s tweets, a petition circulated among a group of people, some associated with Garces Memorial High School. The petition accuses Gordon of “spreading unacceptable messages of ignorance and hate on social media and in his classroom.” It alludes to Gordon’s tweets criticizing Black Lives Matter and claims he has disparaged “other forms of worship, including Islam” in his classroom. The petition also accuses Gordon of “abusing his position to spread his toxic political message.”

“We do not believe that such a person should be granted a platform to teach Garces students,” the petition continued. “We demand action from the school administration.”

Before the day was over, Gordon had received documents from Mona Faulkner, superintendent of Catholic Schools for the Diocese of Fresno, pertaining to his “non-renewal as a Garces teacher for the 2020–2021 school year.”

But Gordon says he had already signed his contract for the upcoming year. LifeSiteNews has seen an email from an administrator at Garces Memorial, dated May 1, 2020, reminding him to send in his contract page and signed “annual responsibility form.” Gordon was the chair of the school’s theology department at the time.

Gordon described Garces Memorial High, which charges parents over $11,000 a year in tuition, as having an “interesting climate” and being a “Catholic education-mill type school.”

“Before I got there, they were teaching modernism,” he told LifeSiteNews.

Gordon said there are many political conservatives at the school but that he had his “enemies” among liberal families and donors who resented his orthodox teaching. However, Gordon believes he was well liked by a majority of his students and did not recognize all of the names on the petition.

“I had taught less than half of them,” he said. “A lot of them were not even students at the school.”

Gordon recognized thirty or forty of the students he had taught who did sign the petition as “liberal dissenters.” He believes that some of the others have an animus against him because he’s a hard marker.

“I’m known at Garces as a non-grade inflator,” Gordon remarked.

He said also that he has never discussed the Black Lives Matter organization with his students.

Gordon’s Rules for Retrogrades was released in March, and he says his book clearly states that there is no room for racism in the conservative movement, “which makes it hilarious that they’re painting me as a racist.” He also resents the label because his wife is Latina.

Gordon, a married father of six, is the sole breadwinner for his family. One of his daughters is recovering from a brain surgery she underwent on April 6. The former teacher said his firing was “particularly despicable” because the administration had known of the girl’s illness, and prayers for her had been said daily during the school’s lockdown Zoom classes.

The plight of the Gordon family has touched hearts, as is evidenced by a GoFundMe page that has now collected over $48,000. Other donors have been making use of the donation box on Gordon’s web page.

“People have been tremendously supportive,” he said

On June 3, 2020, I was wrongfully terminated by the Diocese of Fresno from my teaching position with Garces Memorial High School. The decision was made after I expressed disapproval on Twitter of the recent violent attacks on innocent people by radical groups, and the recent looting and destruction of businesses across the United States.

I called on our country to take action and to use necessary force to protect us from these violent rioters and looters. I am not a racist. As a Christian, I love all races equally: “in Christ there is neither Greek or Jew.” I am a devoted and dedicated husband and father of 6 kids, one of which is recovering from brain surgery. I am a teacher, and I love and support all of my students.

The Diocese’s decision to terminate me was wrongful and a clear breach of my employment contract. The Diocese is discriminating against me because of my conservative political and religious views.

What I have learned from this experience is simple: the Left will stop at nothing to silence and destroy anyone with whom they disagree. They are organized and committed to shutting down debate, silencing speech, and destroying their opponents’ reputations and livelihoods. I will seek justice in the courts.

In 2017, the FBI identified Black Identity Extremism (BIE) as a new form of terrorism. According to an August 2019 article in Salon, the FBI changed the expression to “Racially Motivated Violent Extremism” in 2020.

“RMVEs [Racially Motivated Violent Extremists] use force or violence in violation of criminal law in response to perceived racism and injustice in American society, or in an effort to establish a separate black homeland or autonomous black social institutions, communities, or governing organizations within the United States,” the FBI’s 2020 counter-terrorism strategy guide said.

“According to previous guides, the FBI believes that the threat originated from the Black Lives Matter movement in response to the 2014 shooting of Michael Brown in Ferguson, Missouri,” Salon reported.

In 2017, a Louisiana policeman wounded in a Baton Rouge mass shooting that killed three other police officers sued Black Lives Matter, claiming the organization had incited the violence.

LifeSiteNews reached out to Garces Memorial High School and was referred to the Diocese of Fresno. LifeSiteNews has still not received a response from the diocese’s superintendent of schools.