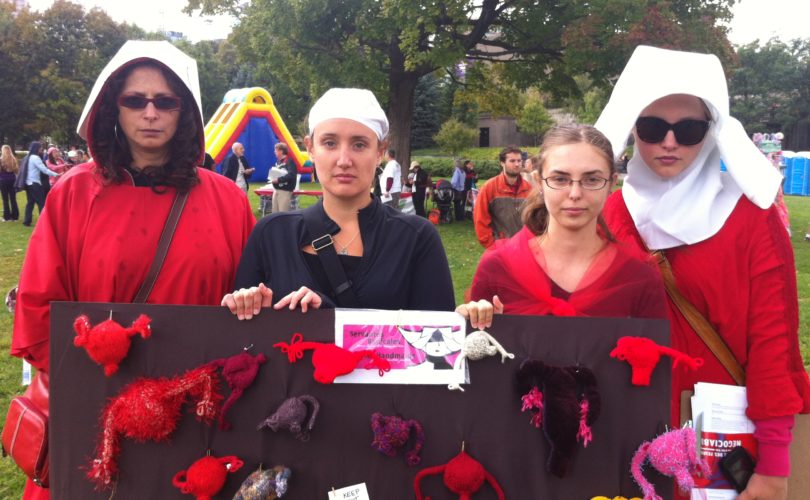 Abortion activist Julie Lalonde, on the far right, dressed in mockery of a Catholic nun while promoting abortion in Ottawa in 2012.The Radical Handmaids’ website

KINGSTON, Ontario, October 23, 2015 (LifeSiteNews) — A Catholic school in Kingston, Ontario, hosted an anti-Catholic abortion activist earlier this week for a “Healthy Relationships/Sexuality Retreat,” in which she told senior students that it is acceptable for a girl to send a naked photo of herself to a boyfriend as long as there is “consent.” The presentation was mandatory for all grade 10 students, and one father says the school gave them no details about the event in advance.

Activist Julie Lalonde, 30, not only sits on the board of Canada’s leading abortion lobby organization, the Abortion Rights Coalition of Canada, but in 2012 she helped found the anti-Catholic group The Radical Handmaids with the goal of combatting a pro-life motion introduced in the House of Commons at that time. During demonstrations, the activists dress in mockery of Catholic nuns, wearing the cornette, the trademark ‘butterfly’ headpiece formerly worn by St. Vincent de Paul’s Daughters of Charity in Montreal.

A Catholic father, whose daughter attended Lalonde’s presentation at Regiopolis-Notre Dame Catholic High School in Kingston on Monday, was shocked that what he called a “radical anti-Catholic feminist” would be given a platform at a Catholic school.

“I feel sick about the whole thing, that this is the message our children are receiving at a Catholic high school. It's a message that says there is no right or wrong, there’s no moral standards,” Colin MacDougall told LifeSiteNews.

MacDougall said that he would have liked his daughter to hear a message that would have simply discouraged people from sending any kind of explicit message or photos.

“How about the message, ‘Don't send them in the first place,’” he said.

“You feel just kind of sick that you send your kids to a Catholic school expecting that they would get some flavor of the Catholic message, at the very least, but instead, it goes the other way,” he added.

Lalonde promotes herself as an activist campaigning to end violence against women. She developed and manages a social program called draw-the-line.ca, a bystander intervention campaign with the goal of ending sexual violence. The program was jointly created by the Ontario Coalition of Rape Crisis Centres and is funded by the province of Ontario.

The activist travels to schools where she speaks to children about her work and what they can do to fight injustice, stand up for the victim, and make a difference. Her most popular talk given to the students deals with how to prevent online sexual violence that arises from social media and texting.

I'm doing a series of high school talks in Kingston this week & I love working with youth, 'cause DAMN. It's insightful hearing from them.

While her talk to the students at the Kinston Catholic high school was not recorded, a similar talk she gave earlier this year to Lanark County youth was recorded and is available online.

In her presentation, Lalonde focuses on the notion of “consent,” telling students that sending a naked photo is not a “problem” as long as the sender gives full consent.

“We’re not talking about whether or not that girl should be taking the picture in the first place. … For us, what’s important is not necessarily whether or not I’ve consented to having my photo taken, but the idea of why is it funny [for my boyfriend] to send it to [his] entire hockey team.”

Lalonde stresses that there is a “huge difference between me and my partners sending pictures to each other, and me sending a picture because I'm afraid that if I don’t, you're not going to date me anymore.” She makes the argument that it’s acceptable for a consenting girl to send a naked photo of herself to her boyfriend, but where she ‘draws the line’ is when that boy then turns around and sends the photo to other people without the girl’s consent.

“What we want to talk about is this idea that photos going viral doesn’t happen on its own. Someone has to initiate that process. Someone has to decide if I’m going to send this on to someone else, that person sends it onto someone else…And that's a problem. That's the biggest problem,” she said.

Lalonde addresses the point about the legitimacy of sending photos with “consent” at numerous occasions throughout her half hour presentation.

“I’m hear to tell you that, one, when we talk about ‘sexting,’ let’s be specific about what we are talking about. Are we talking about people sending sexy pictures to each other because they’re in a relationship? Or, are we talking about you blackmailing me for a photo that I didn’t know you took?”

As part of her presentation, Lalonde tells the girls that having a leaked naked photo of themselves does not necessarily rule out a future career because, she says, “you have celebrities whose entire career is based on the fact that sex tapes or sexy photos of them were released.”

“I open magazines, check out fashion blogs, I'm looking at popular media, and I see, ‘well, she had a sex tape leaked and now she's famous,’” Lalonde said, adding that this is a “message” coming from the “larger and popular culture [which says] ‘we’re totally supportive of the idea of sharing photos.’” Lalonde was silent on whether or not she agrees with this message.

At one point in her presentation, Lalonde briefly mentions that in Canada it is illegal for someone to take a sexually explicit photo of anyone under the age of 18 and that such persons could be charged with making child-pornography. At no point in her presentation does she tell young people to simply never take a sexually explicit photo of themselves or someone else.

LifeSiteNews reached out to Lalonde for comment, but did not hear back from her by press time.

“For instance, she was saying how you can send naked photos of yourself, but it's not your fault for doing it, it's the fault of other people for passing them on and looking at it without you telling them they could.”

Brogan said that when one student challenged Lalonde’s notion that sending the explicit photo is acceptable, the activist “got mad at them and said they have every right to send whatever photo they want.”

When LifeSiteNews related to Brogan that Lalonde, while being an activist who wants to fight injustice and stand up for the victim, is an abortion crusader who fights for a mother to be able to kill her preborn child by abortion and actually sits on the board of a pro-abortion organization, she replied: “I think that's very hypocritical that she says that one should stand up for the victim, when the victim is basically the child being aborted. I don't think she should be giving these presentations, because this is a Catholic school. I would say she has nothing to do with the Catholic faith at all and is completely against it. And she's on the board of a pro-abortion organization. I don't really think we should be listening to presentations given by her.”

The Catholic Church calls every Christian, no matter what state of life he or she is in, to live the virtue of chastity, namely, where one’s sexuality is fully integrated within the person according to God’s plan.

The Catechism of the Catholic Church teaches that chastity is “opposed to any behavior” that would impair the “integrity of the powers of life and love” placed in men and women by God for the purpose forming bonds of communion with others, loving, and ultimately procreating new life within marriage. The Church calls the making and distribution of sexually explicit material a “grave offense,” stating that it is an “offen[se] against chastity because it perverts the conjugal act” and does “grave injury to the dignity of its participants.”

Fonseca called it “disgusting” that an activist would hint to children that they should not worry about a leaked naked photo of themselves because of people who became celebrities after having sex tapes or sexy photos of themselves leaked.

“This sex educator — or as Kathleen Wynne's Liberal government would describe her, this ‘community partner’ — is one step away from encouraging kids to make pornography, going as far as suggesting good things might happen in your career if you make a sex tape.”

“That's the message kids will take to heart from Lalonde's presentation. She trivialized and even glorified being a participant in sex tapes, i.e. pornographic movies,” he said.

“Under the Liberal’s new sex-ed curriculum, this type of lesson given by Lalonde to the Grade 10 students will now be pushed down to younger children in elementary school.”

“How many students believed that this sex-ed ‘expert’ was providing them with, in the words of Premier Wynne, ‘reliable, evidence-based’ teaching on ‘healthy relationships and sexual health?’”

“It is reasonable to assume that this pro-pornography, pro-abortion guest speaker has morally and spiritually poisoned at least some Catholic children so that they will now be more accepting of pornography and of sexual activity before marriage,” he said.

Mary Ellen Douglas, also of Campaign Life Coalition, who was a former trustee at the Catholic school board in question between 1980-85, told LifeSiteNews that she was “horrified” that Catholic leadership in the school would consider Lalonde as a suitable partner for helping to form Catholic children.

“Who invited this woman? Did anyone check her credentials? Did anyone know she was a leader in the pro-abortion movement?” she asked. “Part of her message is so contrary to the Catholic faith that she should never have being invited.”

School principal Terri Daniel at first denied to LifeSiteNews that Lalonde’s presentation was problematic, but then later admitted that at least one message some students took away was that it was acceptable to send naked photos to other people in some circumstances.

“She was invited from the Draw-The-Line organization to talk to kids about maintaining some safety standards when it comes to sexting or acts that would surround that area,” she said.

When asked why a pro-abortion anti-Catholic activist was invited into a Catholic school in the first place, Daniel replied: “I think that’s a fair question and it’s one we are exploring.” She said she did not know who it was in the school who arranged for Lalonde to speak.

LifeSiteNews also reached out to Archbishop Brendan O’Brien in the Archdiocese of Kingston for comment, but did not hear back by press time.

Fonseca outlined a course of action that he said the school board, along with the local bishop, should implement in order to restore parents’ faith in the local Catholic school: