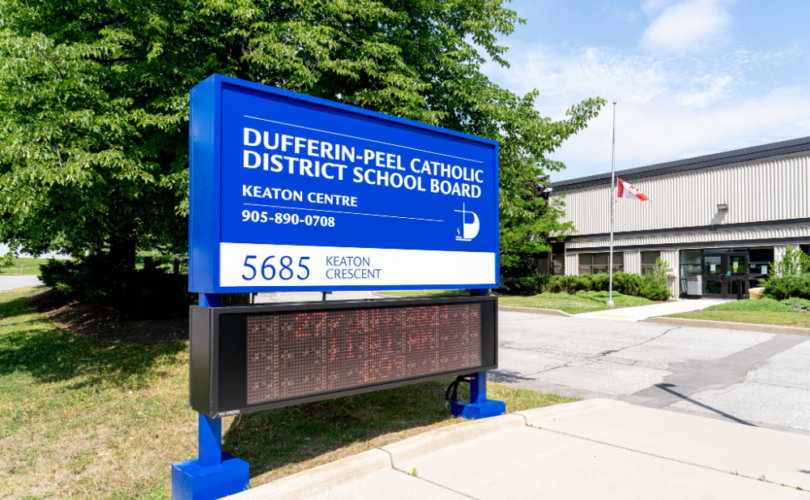 (LifeSiteNews) — A Canadian Catholic school board is pushing a secular agenda by using Bible passages and quotes from Pope Francis.

A former teacher of the Dufferin-Peel Catholic School Board in Ontario recently informed LifeSiteNews that schools within the DPCSB have begun putting up posters that promote acceptance of different secular agendas by using quotes obtained from the Bible and the Pope.

“They’re simply saying that ‘we’re just promoting Catholic teaching: God loves everyone!’” the whistleblower explained in a recent interview. “True. And so, this way, if they use quotes from Scripture, it prevents them from having to explain themselves – they have an out.”

RELATED: Another Canadian school board lining up to hear Father James Martin preach the LGBT agenda

LifeSiteNews was able to obtain copies of the posters, some of which flaunt the colors of the rainbow flag alongside a message of acceptance.

“I praise you, for I am fearfully and wonderfully made,” reads one of the posters, quoting Psalm 139:14 and printed over the colors of the rainbow.

Another poster lists several “phobias” or “isms,” including “transphobia,” “homophobia,” as well as “colonialism,” under which they say “Justice Calls Us to Name it,” and finishes with a quote from Pope Francis.

“We must overcome all forms of racism, of intolerance, and of the instrumentalization of the human person,” the quote reads.

Yet another poster states, “You are welcomed, heard, respected, valued, loved, sacred.”

“On the surface what they are saying is fine – God does love everyone – but it’s what they are not saying and what they’re not doing,” the informer said. “They’re not going far enough to give the entire context, which is problematic.”

The informer told LifeSiteNews that the problem with these posters is that while they are not directly saying that they promote the homosexual or transgender lifestyle itself, they are affirming the sinner while failing to condemn the sin. This creates an atmosphere where teachers and students alike are afraid to speak about the truths of the Catholic faith.

“Yes, God loves everyone,” the informer said. “But the next step is ‘go and sin no more.’”

The informer said that because the Human Rights Code clearly says that context and intent are irrelevant if someone is offended, teachers can easily be suspended for simply teaching Catholic doctrine.

“It’s instilling an atmosphere of fear among faculty and students,” the informer said. “Gender identity politics always does this. That’s the goal – to divide people. To cause chaos. To take something that is true and twist it so that it can be used to push a different agenda.”

“Teachers have told me they are afraid to speak up because they may offend someone and get suspended. This muzzles and suppresses the teaching of the Catholic faith. The board will say “oh, no, you’re still free,’ but in practice that is not what is happening.”

The whistleblower offered some parting thoughts on how people must go forward from this point.