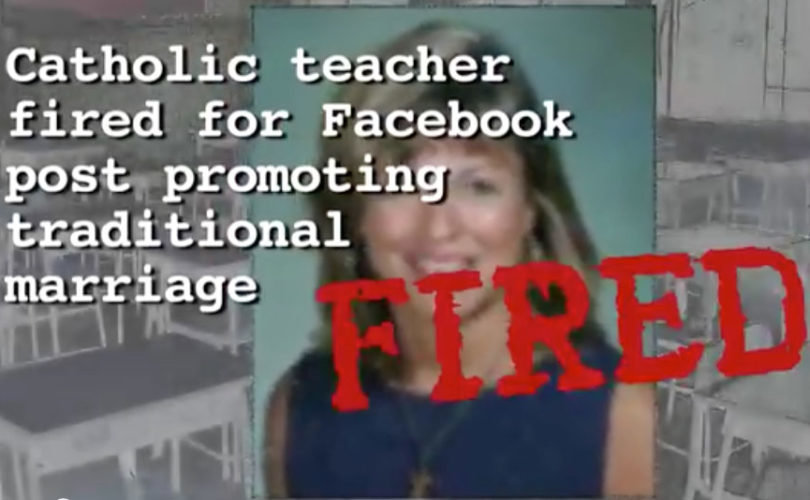 SOMERVILLE, NJ, April 10, 2015 (LifeSiteNews.com) — A teacher suspended from a Catholic school for using Facebook to defend traditional marriage has been reinstated.

Almost one month ago, Patricia Jannuzzi was suspended from Immaculata High School in Somerville, New Jersey, after she made what became controversial comments about same-sex relationships. Over the next several weeks, she was told that the suspension was effectively a release from her job, as she would not be rehired for the 2016 school year.

Jannuzzi was also told that she had lost her pay and benefits for the current school year.

The scandal was compounded by the fact that the Diocese of Metuchen and Bishop Paul Bootkoski were involved in Jannuzzi’s suspension and publicly defended it.

In a media release provided by the Diocese of Metuchen to LifeSiteNews, however, Immaculata Director Monsignor Seamus Brennan announced on Friday that Jannuzzi would get her job back.

“Immaculata High School announced today that all issues related to the employment of teacher Patricia Jannuzzi are resolved,” said the release. According to Brennan, “Immaculata High School has reached an understanding with Patricia Jannuzzi. It is the School’s position that a Catholic school teacher must always communicate the faith in a way that is positive and never hurtful. Tone and choice of words matter and I trust Mrs. Jannuzzi’s stated promise to strive always to teach in a spirit of truth and charity.”

“Given Mrs. Jannuzzi’s otherwise good reputation as an educator over her 30 years at Immaculata, Principal Jean Kline and I have made the decision to reinstate her as a teacher as of today.”

“From the beginning this was a personnel and not a theological issue,” said the statement. “We are now and always have been united in our understanding and commitment to the teachings of the Catholic Church. By agreement with all parties involved, there will be no further comment on the issue.”

Since the controversy first arose several weeks ago, there has been a great deal of confusion as to where Jannuzzi stood with the diocese. Bishop Paul G. Bootkoski first said that the theology teacher was on paid leave, but emails showed that Jannuzzi had been effectively fired, as the school was intending to not rehire her in the fall.

Jannuzzi, who received praise even from some critics for the quality of her teaching and her relationship with students, ran into trouble when she posted a number of comments against same-sex “marriage” on her personal Facebook page, which the diocese mandated she close down.

Same-sex relationships and its agenda threaten to “reengineer Western civ[ilization] into a slow extinction,” wrote Jannuzzi.

Jannuzzi, Brennan, and Immaculata's principal did not immediately return LifeSiteNews' request for comment, though the letter indicates that the parties have agreed not to comment further. A spokesperson for the diocese said the media release would be its only public comment on the reinstatement.

While at least two celebrities — including a former student of Jannuzzi's — called for her firing, orthodox Catholics stood behind the teacher. A petition launched jointly by LifeSiteNews and the Lepanto Institute received more than 5,000 signatures, and the family raised approximately $33,000 in an online petition that was later halted.

Princeton Professor Robert George, who had raised the alarm about Jannuzzi’s suspension, thanked the school in a comment on his Facebook page.

“Sometimes—not often enough, but sometimes—justice is done and things come out right,” he said. “This was one of those times. I am grateful to Immaculata High School and Bishop Paul Bootkoski for doing the right thing. I suspect that Susan Sarandon and the ‘Real Housewives’ guy are feeling a bit less friendly towards them, which, to me, is something to be proud of.”