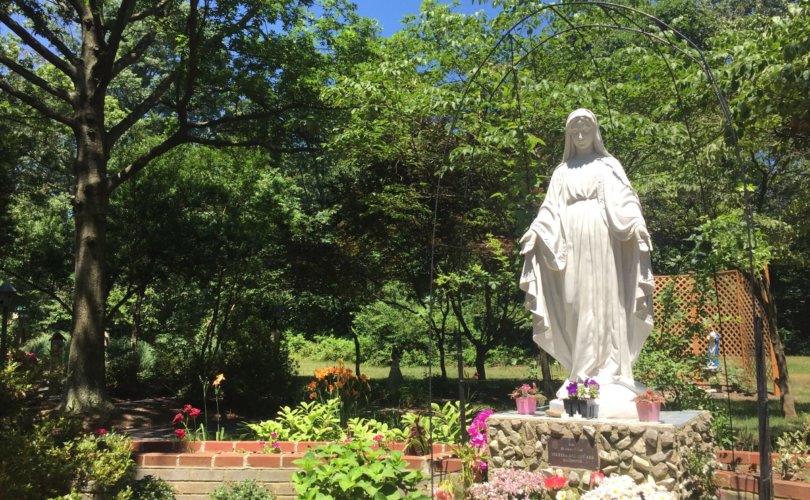 A statue of the Blessed Virgin MaryClaire Chretien / LifeSiteNews

SAN ANSELMO, California, August 28, 2017 (LifeSiteNews) – A Catholic school in California has removed around 162 icons and statues in an effort to be more “inclusive” and avoid “alienating” non-Catholic students.

San Domenico School, a K-12 boarding and day school, is the oldest independent school in California. It was founded by Dominican sisters, who remain involved in its operations today. It is in the Archdiocese of San Francisco.

The Marin Independent Journal reported last week that parents are concerned the statues being removed is the just the latest incident that demonstrates the school's declining Catholic identity.

The head of San Domenico's board of trustees, Amy Skewes-Cox, said the school isn't doing this because of the recent push to remove Confederate statues from public places.

There is “absolutely no connection other than it is change, and people have a hard time with change,” she said.

“We didn’t want to further that feeling” of “alienation” non-Catholic students might have if they see statues, said Skewes-Cox.

The statues were apparently “pitched in the basement,” according to the parent of a former student. According to the MIJ, there were 180 statues around the school. There are now only “at least 18” left.

Sister Maureen McInerney, the prioress general of the Dominican Sisters of San Rafael, said it “really isn’t my place” to be involved with the school's day-to-day operations.

“If there has been a reduction in the number of statues but there are still many statues around the campus, I think that would be fine,” she said. San Domenico is just “making an effort to be inclusive of all faiths.”

The school, which costs anywhere from $29,850 to $58,350 annually, says its students “tend to our garden, learn interconnectedness through our ecological literacy program, and reflect on their place within the sacred community of nature.”

“We value the representation and full engagement of individuals whose differences include…family makeup, gender…religion, [and] sexual orientation,” its inclusivity and diversity statement says. “Our religious studies, ethics, and service learning curriculum encourage systems thinking and an understanding of our global interconnectedness and the ensuing need for social justice, and a constant striving for peace and equity.”

San Domenico's Counselor consults with students on issues of “LGBTQ awareness,” according to the “student support” page on its website.

Cecily Stock, Head of School at San Domenico, said the administration is worried the school is known for being Catholic rather than independent.

“We want to make sure that prospective families are aware that we are an independent school,” she said, even though the school identifies as both “Catholic” and “independent.”

“The Dominican teaching philosophy is not to teach there is only one truth,” said Mirza Khan, San Domenico's director of philosophy, ethics and world religions. “It is to foster conversation, to intentionally invite in participants that have different perspectives in a very open-ended process of philosophical and spiritual inquiry. That has been a long-standing part of the Dominican tradition.”